The 7th and final stage of the Tropical Amissa Bongo has just ended. Run between Owendo and Libreville for a distance of 137.5 km, this stage saw the victory of Eritrean rider Meron Abraham.

Yohann Gene won the African race for the second time in his career finishing the race in 19 hours 41 minutes and 21 seconds.

The traditional morning break, made up of seven riders, could do nothing: this last day of racing was to end with a massive sprint. In this game, the Eritrean Meron Abraham was the fastest.

Three weeks after his African continental title in the team time trial, the young 21-year-old confirms his progress with a first individual victory in the pros.

Tesfom Okubamariam confirmed his status as Best African rider of the Year by finishing second overall. He also received his trophy for the Best African Cyclist for 2016 from the president of the jury Bernard Hinault.

.@TesfomO #Eritrea received today the Trophy of the African Cyclist 2016 from the president of the jury #BernardHinault @tropicale2017 pic.twitter.com/IRSJ1FP2P1

Gabonese cyclists boycotted their Tropicale from the start last Monday in Franceville, protesting unpaid bonuses and lack of physical preparation since the departure of their coach, the former Spanish glory Abraham Olano.

“We took very strong measures: the technical management was sacked, the president of the Federation was summoned to resign and the six riders were struck out,” sports minister Nicole Asselé told the press on the line of arrival. 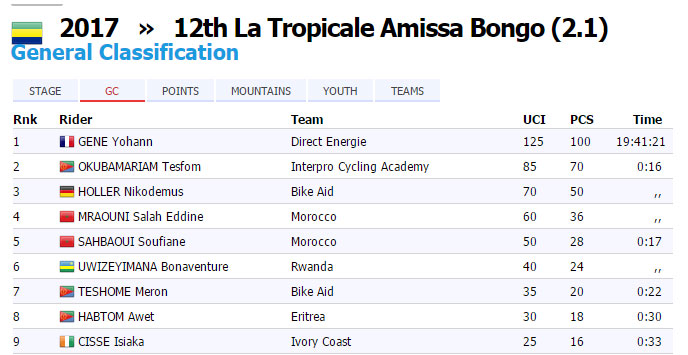