The meeting was held on the sidelines of the African – Arab Summit currently hosted by the Republic of Equatorial Guinea.

They mainly discussed ways of promoting relations between both friendly nations in all fields, together with issues and topics of mutual interest. 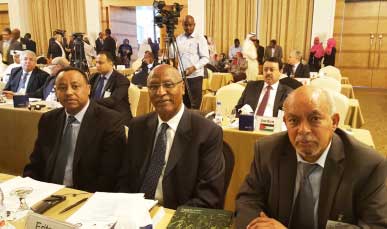 An Eritrean delegation headed by Mr. Arefaine Berhe, Minister of Agriculture, participated in the 3rd Africa-Arab Ministerial Conference on Agricultural Development and Food Security that was held from 31 October to 2 November 2016 in Khartoum, Sudan.

The Conference was held under the theme, “Africa-Arab Trade and Investment for Accelerated Agricultural Development and Enhancing Food Security.”

During his stay in Khartoum, Minister Arefaine met with Prof. Ibrahim Adam Al- Dekheiri, Minister of Agriculture of Sudan and discussed on reinforcing the existing bilateral cooperation between the two countries. The two Ministers agreed on speedy implementation of programs of mutual interest.