In an industrial pocket of the Bronx, sandwiched between a wastewater-treatment facility and an MTA lot, is a tiny road named Tiffany Street. On a humid summer afternoon, Tiffany Haddish is three short blocks away, eating an Egg White Delight McMuffin and hash browns in a bare, windowless conference room that has been designated for our interview.

Since Haddish’s breakout role in last year’s Girls Trip, she has voiced a very specific aspiration: to set up a community center for young people raised in foster care, as she herself was. She imagines building it on two intersecting streets, “Tiffany” and “Haddish.”

The actress doesn’t have children of her own, but she wants to be “a mentor, a mother, a guide,” she says. So when I tell her about the homonymous street nearby, her slender eyebrows climb upward. “I have to go take some pictures right there!” she says.

Haddish was born in Los Angeles to an American mother and an Eritrean father, who left the family when she was three. When she was eight, her mother was in a car accident that caused a brain injury and eventually a mental illness, turning her violent toward Haddish, who assumed the role of de facto parent to her four younger siblings. Five years later, they all ended up in foster care, and Haddish was separated from the others. When she was fifteen, a social worker attempted to address behavioral issues—Haddish hadn’t learned to read beyond a first-grade level and often acted out to distract from that deficiency—by sending her to a comedy camp at the Laugh Factory in Los Angeles.

If you look hard enough, you can find a video of her from that time, trying on her wild-eyed, near-slapstick style. One bit, in which she describes rigging up two old TVs—one for sound, one for picture—to make a single, functioning unit, could fit right into her 2017 Showtime special, She Ready! From the Hood to Hollywood.

>> MUST READ : Tiffany Haddish and Other Proud Eritrean Stars

Even now, just beneath her exuberance, a past defined by poverty and mistreatment still figures into her performances. “The only time I didn’t wanna cry is when I was laughing,” Haddish says, her unlined eyes welling up. “I’ve got all these jokes about my mom, and what I’m joking about, like her abuse and all this stuff, it’s painful. When you realize, ‘My mama, she might love me, but she don’t really like me,’ you know?” 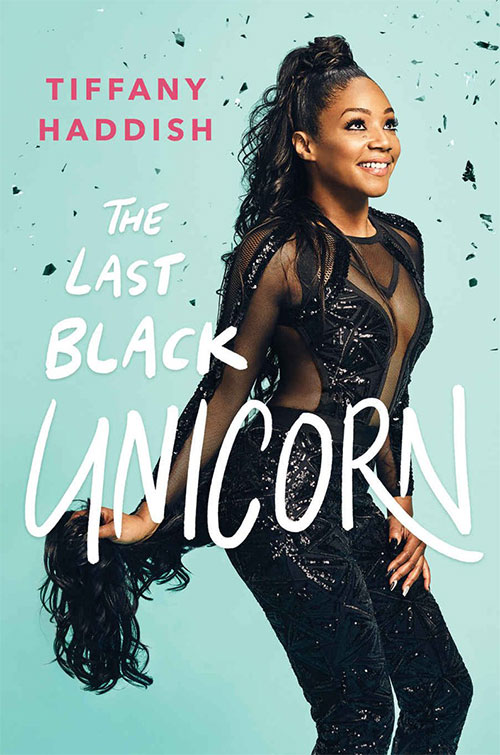 Years later, Haddish reconciled with her mother, even setting her up in an apartment where her sister—who received training to take care of people with mental instabilities—lives with her.

Haddish, now 38, spent her late teens and 20s working multiple jobs—everything from airline check-in attendant to “energy producer” at bar mitzvahs—and trying her hand at L.A. comedy clubs. This varied experience has given her a certain kind of resourcefulness—in the absence of silicone inserts, she instructs the fashion assistant on Vogue’s shoot to fill out her bustier with athletic socks.

Later, sitting in the wardrobe trailer, she asks a member of her team to deliver 600 diapers to a celebrity friend’s birthday bash. “He’s about to have a kid, and he’s gonna need those,” Haddish says. “I like to give people practical-ass gifts.” Haddish has made plenty of new famous friends over the past year, but she has also kept a longtime crew close. At an Essence-magazine event this winter, she thanked one of them, Selena, in particular: “We met when we were twelve years old, and she never got rid of me. Even though I was acting weird and stuff and I wore Payless shoes.” She remains connected to her siblings as well while maintaining a certain degree of tough love: “If they’re like, ‘Oh, can I borrow $100?’ I’m like, ‘You know what? Yeah. I’ll loan you the $100, but if you don’t pay me back before my birthday, you can never ask me for money again.’ ”

Over the past decade she’s worked steadily, stealing scenes on series like The Carmichael Show, as the brash ex-sister-in-law, and in Keegan-Michael Key and Jordan Peele’s film Keanu, in which she played a comically professional gang member. But she became a global sensation with the gut-busting friendship movie Girls Trip, appreciated equally for her performance and her press appearances. On the interview circuit, she dished out some seemingly uncensored stories about, for example, taking an unsuspecting Will and Jada Pinkett Smith on a Louisiana swamp tour she had bought cut-rate on Groupon.

“Apparently I run my mouth a lot. But I’m like, ‘They don’t have no idea the stuff that I really know,’ ” Haddish says, stone-faced. “My friends will be like, ‘Man, Tiffany, they try and say you’re spilling the tea, but you don’t actually talk.’ ” And to media outlets milking her for celebrity gossip, she offers an advisory: “Sometimes I’m just tryna crack a joke.” Like with her recent story that Drake had stood her up for dinner. “I’m not tripping,” she says, laughing. “I think there was going to be a group of us going.” (Haddish is currently single but says she would like to date. “When somebody strikes my interest, I’m like, ‘Let me make some time,’ ” she says.) She admits she’d rather foster children than have her own. “It’s so many people like, ‘You need to just have your own baby.’ And I’m like, ‘I already look at myself in the mirror enough.’ ”

In a cultural climate filled with media-­trained celebrities and their perfectly manicured social feeds, Haddish is a “regular degular shmegular person,” as Cardi B, another celebrity whose recent rise can in part be attributed to her refreshingly candid public persona, might say. Jordan Peele, cocreator of Haddish’s current TBS series The Last O.G., agrees that “Tiffany is very truthful and very real—that, to me, is the cornerstone of all comedy. People can feel when someone is lying.” For fans, Haddish’s brand of warm sincerity can feel as affirming as it is entertaining.

In her comedy, and when you speak with her, Haddish seems genuinely thrilled with the way her career has taken off. She recently splurged on a house of her own in Los Angeles—paid for in full, “no mortgage!”—where she lives with her two dogs, a pitbull named Dreamer and a Maltese-Yorkie mix named Sleeper, and her cat, Tonic, whom she adopted from the set of Keanu. This month sees her reuniting with Girls Trip director Malcolm D. Lee in Night School, in which she plays Kevin Hart’s overworked yet dedicated teacher. She manages to sneak into the role her signature phrase (“She ready!”) and dance move (an exaggerated nae-nae).

“When somebody all of a sudden gets exponentially more famous, you worry about their ability to keep up with that,” says Peele. “Tiffany is somebody I’m not worried about.” Fame has crystallized much for Haddish. “My sister was like, ‘Don’t let these Hollywood motherfuckers use you.’ I’m like, ‘I’m here to be of service. I’m here to be used,’ ” she says. “Don’t use me all the way up, ’cause I need some for me, but use me.”

Decades after her father had left, Tiffany reconnected with him. Her ex-husband, a former cop turned private investigator, wanted to impress her in the early days of their relationship, and set out to find Haddish’s father­—which he did. She helped her father secure his green card and began the business of repairing their relationship. After his death last year, she visited Eritrea, the beautiful homeland she had, with some skepticism, heard him describe.

There, in between getting to know her family and meeting the president, she gave herself a baptism of sorts, in the Red Sea. “Girl, I’m telling you, I got in there. I felt my soul. Like, for the first time, I’m a complete person now. I cried a little bit,” she says, tearing up again at the memory. “And I prayed for my father to forgive me for thinking that he lied to me. . . . And then I’m like, ‘Dang, Tiffany.’ I tried to let that feeling wash away and just start really trusting.”