Are We Going to Have Three Eritreans Again in La Vuelta?

With 10 days to go before the start of the last Grand tour of the year, La Vuelta a Espana, Team MTN-Qhubeka has confirmed only 2 riders so far, Yohan Van Zyl and Italian Sprinter Kristian Sbaragli.

In the next few days, Eritrean rider Natanel Berhane is expected to be confirmed in the team of nine riders for MTN-Qhubeka. That will be his 2nd La Vuelta after he raced in 2014 edition for his former team Europcar, while Eritreans Daniel Teklehaimanot and Merhawi Kudus rode in the same Vuelta with their current team MTN-Qhubeka.

If Merhwi is also confirmed, then it will also be his second La vuelta and third Grand Tour (GT) at a tender age of only 21.

After becoming the first black African to take part in the 2012 La Vuelta with his former World Tour (WT) team Orica GreenEdge, this one coming up, if confirmed, would have become Daniel’s 3rd La vuelta and 4th grand tour. However, in his recent interview with EriTV following the heroic home coming, Daniel said that he might be competing in the tour of Britain and if that is confirmed, then he will definitely miss out on the 2015 La Vuelta because the two tour clash with one another. As much as Eritreans in UK love to watch him and meet him here in UK, we would rather see him making history in a race much bigger than the Tour of Britain.

As a harder climbing race than the Tour of France, so far, Team Movistar have fielded the strongest climbers in it. Valverde, Quintana and last year’s summit finish stage victor, Winner Anacona. Anacona had won that stage quite emphatically after escaping early before the final climb. Amongst the only black Africans from Eritrea, Daniel Teklehaimanot had a particularly marvelous result finishing amongst the big climbers and only within less than 10seconds from Froome.

Froome is also confirmed in team Sky’s starting line up for La Vuelta 2015 but not yet his two main aiders, Richie Porte and Gerraint Thomas. For now, the Irish climber, Nicolas Roche, is the only Froome’s Lieutenant confirmed. Froome has been extremely lucky to have such an amazing teammates that are so much, Nicolas Roche is the son of the famous world Road champion Stephen Roche, Stephen has also won the Giro as well as the Tour de France in the same year.

Famous Eritrean cyclist of the 80’s, Zeregabir, had chance to compete in the same Road race with Stephen Roche at the 1980 Moscow Olympic.

The other confirmed starters for the La Vuelta 2015 are confid’s climber Daniel Navarro and sprinter Nacer Bouhanni. Bouhanni’s sprint rival, john Degenkolb is also in the starting line up for team Giant Alpecin. The two had a head to head in last years La Vuelta and once Degenkolb was accused by a furious Bouhanni blaming him for deliberately pressured the flying Bouhanni into the narrow space pushing him onto the advertising board. 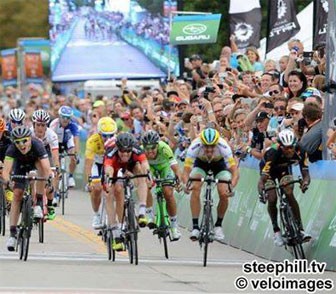 The exact same thing happened to Natnael in that stage #3 of the Tour of Utah last week where stage #2 winner Slovenian Jure Kocjan had appeared to be trying to dangerously close down on Natnael for space. So much so that Natnael had to, literally, ride inclined on the Advertising board when he crossed the line 6th in a photo finish. That sort of selfish move by the Slovenian could have caused a crash and possibly a serious injury to Natnael. Thanks God, Natnael kept his cool and controlled his bike very magnificently.

The US team BMC, which had won the Team Time Trial in the last Tour de France by 1 second over Team Sky is led by their star climber, Tejay Van Garderen. A strong 3rd in the GC and fighting for the yellow jersey, Tejay was forced to abandon the race in stage #17 of the last Tour de France due to sickness. He broke down in tears and felt he let down his teammates that had worked their socks off to have gotten him as a strong GC contender up to that point.

MTN-Qhubeka’s fortune was quite the opposite in that particular stage, where 3 MTN riders including Daniel and Merhawi finished top 15 and propelled the team top in the team classification for the stage and 2nd overall. However, the sad twist to the story was that their fellow MTN rider, Louis Menjtes also got so sick that he finished the race last and was unable to start the race the following day and missed out on the famous Alpe d’Huez that he had trained on with Merhawi, Daniel and Natnael in the run up to the start of the Tour de France.

Team Astana is also making a strong presence in the 80th La Vuelta in 10 days with Luis Leon Sanchez, Nibali, the famous climber Mikel Landa of the Basque country as well as the young climber from Italy, Fabio Aru. The four of them alone have got an experience of 35 Grand Tour between them, with Nibali and Luis Sanchez 13 each. That’s a huge experience. With Nibali having won all the GC once each, surely Luis Sanchez should be made the team leader in his home country. It was remembered that Natnael winning the yellow jersey on the last day from Luis Sanchez at the only African 1st category race of the 2014 Amissa Bongo Tour of Gabon. This is a proof, provided that the right help whoever the team leader of MTN-Qhubeka gets, the sky is the limit.

For Katusha, it will be a make or break for. The veteran Joaquim Rodriguez, who has raced in a record 22 Grand Tour spanning 14 years. Rodriguez is by far the clean cyclist that is marred by a lot of scandals over the years. Perhaps that might be the reason he was unable to win. He had won several stages including two stages in the last Tour de France but lost the KoM polka dot Jersey to Daniel Teklehaimanot in the 6th stage.

Team Orica GreenEdge has confirmed Colombian climber Estaban Chavez in the starting line up but are also expected to include the two English sensational identical twins (Adam and Simon Yates), who are both very able climbers. All of them are riders that have joined immediately after Daniel left Orica for MTN-Qhubeka.

Last but not least, the Italian Team Lampre Merida has confirmed 4 riders that includes Tsigabu Girmay of Ethiopia. Tsigabu is the former teammate of the six Eritrean riders at MTN-Qhubeka that included Tesfay Achu, Meron Russom, Freqalsi Debesay and Jani Tewolde as well as Daniel and Merhawi last year until he moved this year to team Lampre Merida. It would be Tsgabu’s first la Vuelta but second GT after he took part in the last Giro d’Italia. Tsgabu was in the Tour of Quinghai Lake last month racing in a 13 stage tour in China along with Mekseb and Meron Amanuel of Team Bike Aid.

MTN-Qhubeka is expected to confirm more riders in its starting line up no later than this week. Natnael is almost certain but it’s 50-50 for Merhawi and Daniel. I think Jim Zingezo’s will be confirmed simply because of his performance at the last Tour of Utah. But so was Merahawi Kudus and Daniel Teklehaimanot in the last tour de France. Again, like for the Tour de France, it’s going to be a tough decision for MTN-Qhubeka managers to select only 9 riders out of 23.

Wishing all the best for all.