Two missiles fired from rebel-held territory in Yemen fell short of a US warship patrolling the Red Sea off the coast of the war-torn country, the US navy said Monday.

The USS Mason “detected two inbound missiles” within an hour of each other from around 7:00 pm (1600 GMT) on Sunday, said US Naval Forces Central Command spokeswoman Paula Dunn.

The destroyer had been “conducting routine operations in international waters at the time,” she said in a statement.

“Both missiles impacted the water before reaching the ship,” said Dunn, adding that “there were no injuries to our sailors and no damage to the ship”.

“We assess these missiles were launched from Huthi-controlled territory in Yemen,” she said, referring to the Iran-backed rebels fighting Yemen’s internationally recognized government.

The Huthis described as “unfounded” reports they fired missiles at the US destroyer.

Rebel forces “did not target any warships,” said a spokesman quoted by the insurgents’ sabanews.net website.

US ally Saudi Arabia later Monday “forcefully condemned the attack” which it said was carried out by Houthis and their allies.

Also on Monday, the Riyadh-led coalition fighting the Houthis accused the rebels of firing a ballistic missile towards the southwestern Saudi city of Taif, hundreds of kilometres (miles) from the Yemeni border.

The missile was one of two which the Saudi-led coalition intercepted on Sunday, the coalition said, adding the other was launched toward Marib, east of Yemen’s rebel-held capital Sanaa.

That attack, which was carried out on October 1, was claimed by the Shiite rebels.

The UAE is a key member of a Saudi-led coalition that has been fighting the Yemeni rebels since March last year.

>> ALSO READ : A New Danger Rises in the Red Sea

In its statement on Monday, the US navy said the United States remains “committed to ensuring freedom of navigation everywhere in the world”.

“We will continue to take all necessary steps to ensure the safety of our ships and our service members,” its spokeswoman was quoted as saying.

The missile fire comes after the Iran-backed rebels blamed the coalition for an air raid that killed more than 140 people and wounded at least 525 on Saturday at a funeral in Sanaa.

Yemen’s rebel-allied former president Ali Abdullah Saleh on Sunday called for mobilization along the border with Saudi Arabia to avenge that attack.

The Houthis swept into Sanaa in September 2014 and advanced across much of Yemen, forcing the government of President Abedrabbo Mansour Hadi to flee.

The conflict has killed more than 6,700 people — almost two-thirds of them civilians — and displaced at least three million since the coalition launched military operations, according to the United Nations. 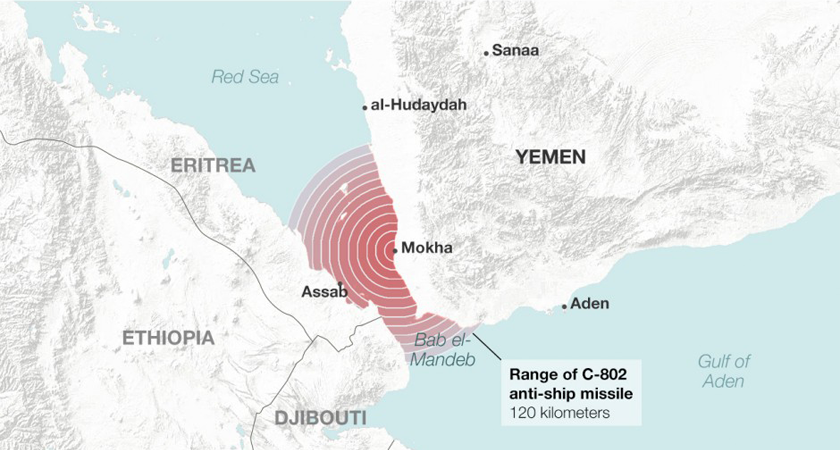