A New Danger Rises in the Red Sea

An attack on a ship in the Red Sea raises fresh concerns about Yemen’s civil war. On Oct. 1, an Emirati vessel operating near Yemen’s Red Sea port of Mokha was attacked. According to claims made by Houthi rebels, they employed an anti-ship missile in the assault, a capability the group had never before demonstrated. If true — and a video posted online seems to support the claims — Houthi fighters would be able to pose a significant danger to Saudi-led coalition warships in the Red Sea, as well as to civilian ships that pass through the area.

Moreover, the appearance of a type of anti-ship missile previously unseen in Yemen would mean that considerable gaps exist in the arms embargo directed against the Houthi fighters. Added to recent stagnation of the Yemeni battlefield, the incident casts a different light on the strength of the Houthi rebellion in the face of Saudi-led air and ground campaigns.

The attack targeted the Emirati HSV-2 Swift, an advanced transport ship that was originally part of the U.S. Joint High Speed Vessel program. While the Houthis claim that the ship sank, unnamed U.S. defense officials reported that the heavily damaged vessel was moved to the port of Assab in Eritrea, where the United Arab Emirates is running logistics operations in support of the war effort in Yemen. The naval presence around Yemen plays an important part in this effort by transporting and supplying ground forces operating in the country, delivering humanitarian aid and enforcing a blockade meant to prevent weapons transfers to the Houthis.

The Houthis said they used a Chinese-designed, C-802 anti-ship missile system to conduct the attack. Its long-range missiles are designed to home in on surface vessels and inflict devastating damage. With a range of 120 kilometers (about 75 miles), the missiles would put a sizable stretch of the area near the Bab el-Mandeb strait connecting the Red Sea with the Gulf of Aden in the line of fire. More important for the United Arab Emirates, though, the missiles could also reach Assab and the naval base that it has been constructing just north of the port.

Despite the Houthis’ claims and supporting video, competing accounts suggest that the attack demonstrated the tactical wit of the Houthis but not the advanced weaponry they boast. Some reports quote U.S. defense officials as saying the attack was conducted with a shoulder-launched anti-tank missile fired from aboard a boat, a theory that would more closely match previous Houthi tactics. Regardless of the method used to attack the HSV-2 Swift, the Houthis have demonstrated an ability to strike effectively at costly coalition assets deployed in the waters near Yemen. Whether they did so by obtaining new advanced weaponry, or by deploying their existing weapons in an innovative way, the apparent threat they pose to coalition vessels and civilian shipping in the Red Sea is clear.

Houthi rebels release video footage showing the moment when a missile strikes a UAE naval vessel participating in the Saudi-led coalition to beat back the Houthi opposition in Yemen. 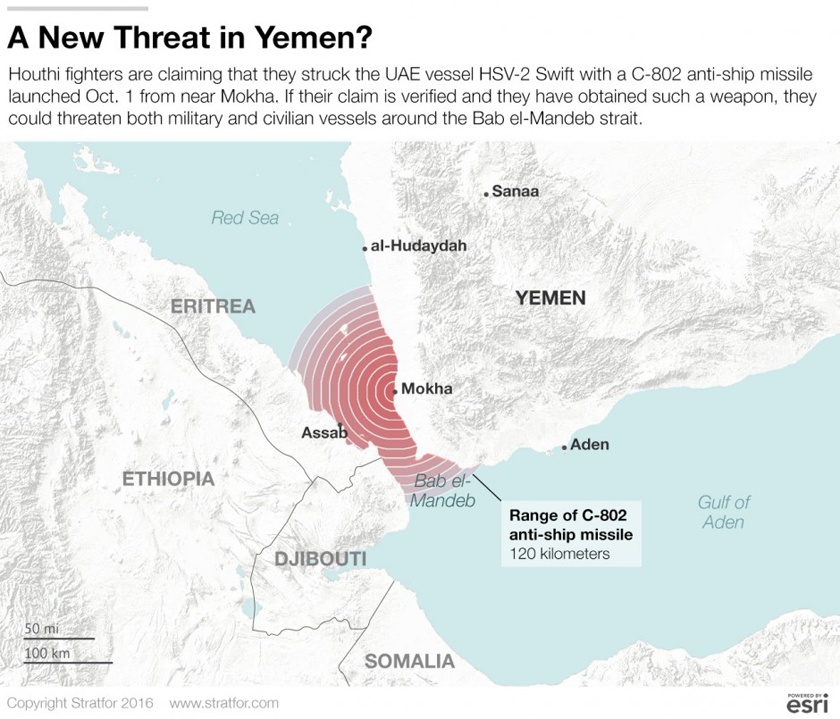