Habtom Yohannes, a well-known activist against Eritrean government who lives in Netherlands, was given a permission to attend the courtroom as a news reporter on the case of Meseret Bahlbi vs Mirjam Van Reisen. However, his cover as a reporter has failed miserably, and not for the first time.

Habtom Yohannes, whose biased political actions and impartial approach to report in a law case has typically misrepresented and omitted important part of the court proceedings, thereby giving a complete different representation of what happened in court.

The first and basic omission of his reporting starts from the very opening speech of Meseret’s Lawyer, in which he began the case by stating, Meseret as a defender of human rights in Eritrea and explaining he does his work by remaining in touch with his birth nation. He also wants to strengthen the ties between the Netherlands and Eritrea, while Mirjam van Reisen wants to break these ties. That is their respective political differences. However, by making slanderous and false accusations, Mrs van Reisen went too far and forced Meseret to take legal action against her to clear his name.

Typically, and sadly, Habtom Yohannes had intentionally and purposely twisted or omitted facts as mentioned in court to suit his objective.

The following are some of the issues:

– YPFDJ Holland adheres to the ideology of PFDJ, which is based on respecting Human Dignity and self-reliance, moreover in the Netherlands YPFDJ is an independently registered organization which has no legal or financial ties . Habtom Yohannes does not mention this important information while the lawyer of Meseret clearly stated this in court. Everyone within the Eritrean community already knows YPFDJ Holland is based on the principles of self-reliance and therefore does not receive any budget from the Eritrean Government or the Dutch government. YPFDJ members are all volunteers of the community.

– Meseret’s lawyer has emphasized the fact that Van Reisen has tried to characterise herself as a victim is turning the circumstances upside down . It is Meseret who is being publicly accused and vilified here and experiencing actual harm. 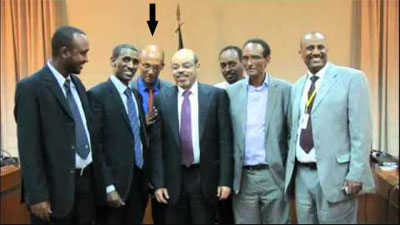 Furthermore, in his report, Habtom Yohannes mentions things that were never raised in the court room. If he had reported the court proceedings as it happened, then there would be no issues to raise, but he repeatedly fails to report the truth. Habtom Yohannes always claims to be a religious man and a journalist, but when presented with a unique chance to report honestly and impartially, he is found short of telling the truth. He fails both ethically and as journalist and exposed himself for what he truly is. Habtom’s improper inference is that Meseret and his siblings have said Eritreans are economic refugees while working as interpreters. Meseret’s siblings have never involved themselves in political or media activities, and he should be ashamed of himself to slander people without any evidence, and everyone in Netherlands know interpreting has a strict code of conduct and any misdemeanour can be dealt with relevant authorities, instead of cheap propaganda presented in his report.

Incidentally, Meseret’s words have been twisted by the Dutch media every time. He had talked about the length of the National Service as a reason for many young people to leave Eritrea, equally, he has also written extensively about this topic on his blog.

He also explained that sovereign Eritrea’s land has been occupied by neighbouring country Ethiopia for more than 16 years. Furthermore, Meseret said “As if this were not enough, there are also severe economic sanctions against Eritrea all these factors together were the reason of the social and political implications for the past 16 years, and the youth of Eritrea were the most affected section of the society.”

Just like the Dutch media misrepresented the words of Meseret Bahlbi, Habtom Yohannes have purposely twisted his words to suite his objectives. He wants to portray Meseret as a person who does not want Eritreans to receive their permit papers in the Netherlands. Nothing can be further from the truth. Meseret has clearly stated that his new coming brothers and sisters to Netherlands are welcome and should harvest all the opportunities provided and improve their lives here in Netherlands. Moreover, he also stated that the Netherlands and Eritrea should have a better working relationship so that those who have remained inside Eritrea have better opportunities domestically. Meseret writes in his blog and anyone can easily refer to it.

Habtom has long been engaged in spreading lies about the Eritrean community in Holland. For example in 2012, he called to a venue owner in Rotterdam and said that Eritrean Festival is organized to send money to Bin Laden. The venue owner had to laugh and said this Habtom must have established some psychological illness.

In his recent interview with VOA about some incidents around the Eritrean church in Rotterdam, characteristically, he seemed to want to distance himself from his association and links and showed that old habits are very hard to shake. Lying and cheating and pretending to be a journalist is what Habtom is known for in the Eritrean Community in Netherlands. Beware of the wolf in sheep’s clothing which has characterised the behaviour of Habtom Yohannes since a very long time.