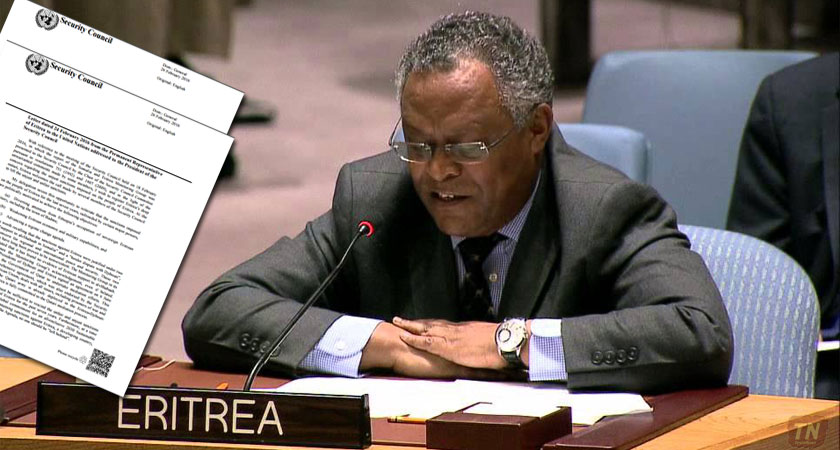 My delegation seizes this opportunity to reiterate that sanction imposed on the people of Eritrea for the last seven years, railroaded by certain major powers, is politically motivated to achieve the following objectives:-

a. diverting Ethiopia’s occupation of sovereign Eritrean territory, including the town of Badme;
b. weakening Eritrean economic and military capabilities; and
c. advancing a regime change agenda.

It is worth recalling that the sanction against Eritrea was justified under two pretexts, “support to al-Shabaab in Somalia” and “border dispute with Djibouti”, invoking concern for regional and international peace and security. These two justifications have long been proven to be non-existent. The SEMG in its reports has stated that “it has found no evidence of Eritrean support to al-Shabaab.” Eritrea welcomes SEMG’s acknowledgement, even if belated.

Moreover, the Presidents of Djibouti and Eritrea have signed an agreement on 6 June 2010, entrusting the Government of Qatar to undertake mediation efforts. This seven-point Comprehensive Agreement, which was also endorsed by the UN Security Council and African Union, deals with all issues including POWs and missing persons. The Qatari army is already deployed in the Eritrean Djibouti common border. Eritrea is fully committed to the Qatari Mediation process.

These two facts must be sufficient to rescind the unfair and unjust sanctions imposed on the people of Eritrea for the past seven years. Furthermore, at a time when there is a strong global commitment for an all-inclusive 2030 Sustainable Development Agenda, maintaining sanction against Eritrea, a developing country, is unwarranted. No one should be left behind”.

However, resorting to a creative and selective interpretation of its mandate as well as in an attempt to stretch the scope of the sanction resolution, the SEMG reported that “Eritrea is supporting armed groups in Ethiopia.” This persistent and unwarranted effort by the SEMG to report about the conflict between Eritrean and Ethiopia contravenes the UN Security Council Resolutions; hence, must be dismissed as illicit, inappropriate and counter-productive. The Eritrea – Ethiopia conflict is not within the purview of the SEMG’s mandate. It was not a factor when the sanction was imposed on Eritrea.

Furthermore, Ethiopian leaders and officials publicly admit that they are hosting, financing, arming and training several subversive Eritrean groups that intermittently unleash terrorist forays against the people of Eritrea.

* On 7 July 2015 the Prime Minister of Ethiopia speaking to his Parliament said that “Ethiopia will be forced to take appropriate action against Eritrea.”

* On 9 August 2014 during an interview with the Washington D.C. based Radio Tsenat, the Prime Minister of Ethiopia clearly stated that “the no-war no-peace situation with Eritrea is over. Ethiopia from now on is ready to take military action against Eritrea”

* On 17 April 2012, speaking to the Ethiopian Parliament the late Prime Minister Meles Zenawi stated that “the Ethiopian government has decided to carry out a more active policy, taking actions against Eritrea. The action will involv using all means at Ethiopia’s disposal to change the Eritrean government. The other major area where Ethiopia will further strengthen its activity is in supporting Eritreans in their campaign to change the government.”

The SEMG is well aware that the above belligerent statements by the Ethiopian officials constitute an act of aggression against Eritrea that cannot be downplayed or glossed over.

The fact is Ethiopia continues to occupy sovereign Eritrean territories in flagrant violation of international law, the UN Charter, and the “final and binding” delimitation and demarcations decisions of the Eritrea Ethiopia Boundary Commission (EEBC). It must also be underlined that Ethiopia’s continued breach of international law and the provisions of the Algiers Agreement, guaranteed by the UN and African Union, require appropriate punitive measures by the UN Security Council. In accordance to the UN Charter and international law, Eritrea has every right to reject occupation and to defend itself against any occupier. Therefore, the SEMG’s focus on alleged acts of Eritrea against Ethiopia is morally unconscionable and legally incompatible with its mandate.

The report of the SEMG stated that “the Group had received unconfirmed reports of the presence of Eritrean soldiers in Yemen fighting alongside the Arab coalition.” This allegation is patently false. But here again, the SEMG’s proclivity to dwell on malicious and fabricated hearsay to maintain the harassment of Eritrea is crystal clear. Who are the sources and what is the underling motive? Is this a continuation of presenting fabricated allegations against Eritrea by the Group? The Group in its 2006 report stated that “Eritrea had sent 2,000 soldiers to Somalia”. In spite of unequivocal evidence that there were no Eritrean soldiers in Somalia, this fabricated report had never been retracted by the Group. So, is this another reply of the 2006 episode of inserting fabricated accusations to serve a specific purpose? And in any case, what is the motive and hurry to include unconfirmed allegations in the report? Why does the SEMG insert in its report innuendos and attempts to insinuate “potential” violation? This is a deliberate disinformation campaign.

Just for the record, nowhere in the Security Council resolution is Eritrea restricted or sanctioned from participating as well as joining any initiative, alliance or coalition in the fight against global extremism and terrorism. Eritrea, as a country with 1,200 Km coastline and more than 350 islands with 50% Christian and 50% Muslim population has a long and close maritime border with Yemen. The situation in the Red Sea and Horn of Africa, including in Yemen, impacts and affects Eritrea. The unfortunate development in Yemen is compounded by the spread of extremism and terrorism in the Horn of Africa and the Red Sea region. In this regard, the importance of sustained engagement between countries in the region is indeed too palpable to merit emphasis. At a time when combating global extremism and terrorism is at a top of global agenda that is endorsed by all Members of the United Nations, Eritrea’s cooperation with the countries of the region must be commended and not restricted.

Other coordinated and distorted information that are peddled by some quarters are “Eritrea’s refusal to allow the SEMG to visit the country and its cooperation:. These are lame excuses and pretexts that are advanced to maintain the unjust sanction against the people of Eritrea.

Just for the record, the SEMG has visited Eritrea twice and given all types of access to various government officials, financial information and explanation to its queries. However, instead of reflecting its interactions and reporting on matters that are within its mandate, in violation of the UN Charter and UNSC resolution which clearly “reaffirms its respect for the sovereignty, territorial integrity, and political independence and unity of Eritrea”, resorting to its demonizing and disinformation campaign, the Group chose to dwell on Eritrea’s internal political, social and economic situations. Eritrea’s military and security capabilities and secrets supported by Satellite picture were presented for anyone to use or read.

On the issue of cooperation, Eritrea has fully cooperated with the SEMG and has also faithfully responded orally and in writing to all its queries. In the past years alone, 15 formal and informal meetings, including three video conferences interaction, have taken place between Eritrea government officials and the SEMG. Therefore, statements by some quarters such as “Eritrea must fully cooperate with the SEMG” are, once again, factually wrong and pretext to continue the unjust sanction.

In conclusion, my delegation reiterates its appeal to members of the Security Council to immediately and unconditionally lift the unjust and unfair sanctions imposed on the people of Eritrea.

b. Eritrea Djibouti issue is being handled by the Government of Qatar and Eritrea remains committed to mediation;

c. Eritrea has in good faith fully cooperated with the SEMG and allowed it to visit Eritrea twice;

d. The growing threats of terrorism and extremism in the Horn of Africa and the Red Sea region, in particular the developments in Yemen, its implication on Eritrea’s security,

Furthermore, in the interest of peace, security and development in the Horn of Africa and the Red Sea region, Eritrea calls the Security Council to shoulder its responsibility by demanding Ethiopia to withdraw from sovereign Eritrean territories, including the town of Badme.

Please accept, Excellency, the assurance of highest consideration; and I would be most grateful if this letter be brought to the attention of the members of the Council, and be circulated as a document of the Security Council.