To conclude her three-day Africa visit which also took her to Mali and Niger, German Chancellor Angela Merkel travelled to the Ethiopian capital of Addis Ababa on Tuesday where she was welcomed with military honours.

Her reception speaks volumes about the reactionary character of the return of German militarism to Africa. Just two days prior to the chancellor’s visit, the Ethiopian regime declared a six-month state of emergency in order to undertake even more brutal measures to suppress popular protests.

On the previous weekend, heavily armed security forces attacked a mass rally to mark the traditional harvest festival of the Oromo people. Fifty-five people were killed, according to official statistics, but opposition sources reported more than 650. Youtube videos showed helicopters dropping tear gas onto the crowd of people and security forces firing into the crowds.

According to media reports, the army has shot more than 1,000 people since the protests broke out last November in the Oromo and Amhara regions.

The protests are directed against the government of the Ethiopian Peoples’ Revolutionary Democratic Front (EPRDF), which has governed the country in an authoritarian manner since 1991 and brutally suppressed all opposition. The uprising by the Oromo and Amhara peoples was triggered above all by the government’s land policy, which compels impoverished farmers to sell off their land for next to nothing to the state in order for it to be sold off to foreign investors.

Anti-government protests and a state of emergency. What is going on in Ethiopia? pic.twitter.com/pMO4EMgY14

With a population of 92 million and an average gross national income of $570, Ethiopia is among the poorest countries in the world. The economic growth of the past decade has benefited only a small corrupt ruling elite. The vast majority of the population lives below the absolute poverty level. According to World Bank data from 2015, more than 30 percent of the population in 2011 had to live on less than $1.25 a day.

The repressive measures of the regime are so obvious that even sections of the bourgeois press in Germany could not avoid discussing it. “If we had peace in this country, then 200 people would not have died in this way,” Biru Tadese, the father of a victim, told ARD.

“Who should we complain to? The government acts like God. Who should we talk to? We just bury our dead. I saw how they loaded bodies onto trucks like wheat or corn. But these are human beings.”

Ethiopian PM Hailemariam admits protest deaths could exceed 500, but says the exact figure is not the key issue https://t.co/3Y5Yiwazvx pic.twitter.com/dpI3A63Ii7

Another father named Khala complained, “My son just went out to charge his phone. They shot him from behind as he tried to run away from them. He never threw any stones, nothing. He is a teacher. My son died even though he did nothing bad.”

None of this prevented Merkel from meeting with Ethiopian Prime Minister Hailemariam Desalegn and the commission president of the African Union (AU), Nkosazana Dlamini-Zuma. She presided over the opening of the so-called Julius Nyerere building for peace and security, which was funded by Germany to the tune of €30 million, as planned. It will serve as the headquarters for the AU and has a conference hall as well as a store and headquarters to lead military interventions.

It is becoming ever clearer that an important factor in the imperialist powers’ offensive in Africa is the fear of a revolutionary upsurge of the masses as took place in Egypt and Tunisia five years ago. At a joint press conference with Desalegn, Merkel offered German support for the Ethiopian police and warned,

“The hatred and dissatisfaction towards the political institutions is growing to such an extent that the acceptance of the state is no longer there.”

In her speech to the AU, Merkel also made clear to the African regimes that she supports the suppression and brutal exploitation of their populations in the name of “peace and security.” She cynically declared, “The African Union and its regional organizations have demonstrated how important the ability to act is. With rapid reactions and negotiations, it has been possible to prevent several large-scale outbreaks of violence. This experienced responsibility saves lives and opens new perspectives.”

Merkel made clear the “perspectives” she was talking about in her subsequent remarks. She called for the prevention of illegal migration, caused by Africans “with completely wrong impressions” setting off for Europe. To this end she referred to the migration partnerships with the European Union (EU). Under these agreements, despots like the Egyptian dictator Al-Sisi, Sudan’s Omar Al-Bashir and even Desalegn himself will receive €1.8 billion from the EU to detain refugees in Africa and keep them away from Europe. […] 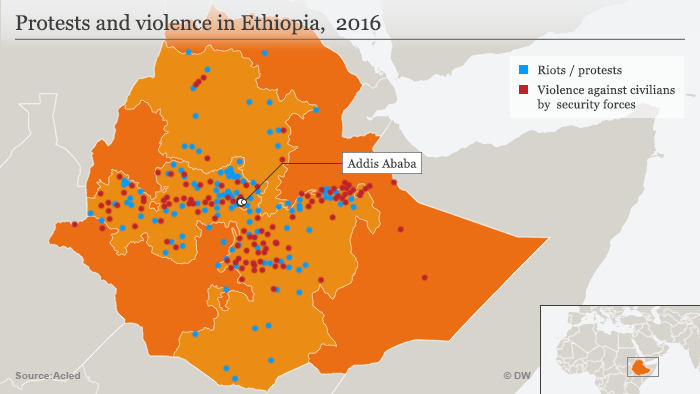 Dummkopf! is the word that comes to mind when seeing Frau Merkel, Germany’s Chancellor sharing the stage with the Ethiopian Prime Minister while that same PM’s death squad’s were opening fire on unarmed demonstrators in Oromia, killing 23 and wounding over 100.

Didn’t the Ethiopian PM just announce the imposition of martial law giving the Agazi death squads free play to commit murder and mayhem against any and all Ethiopians with the temerity to peacefully protest against the corruption and brutality of the current regime?

Dummkopf! may not be enough when it comes to describing such stupidity, to visit a country in the middle of a mass insurgency against the compradore regime whose leaders have stolen hundred$ of million$ of funds meant for Ethiopians suffering from the worst drought and famine in 60 years?

Arschloch (assh**le) is probably a better word for Frau Merkel promised to pump hundreds of millions of euros into the bank accounts of one of the most corrupt and brutal dictatorships on the planet, all the while the regime supporters are moving their families and money to foreign countries and western bank
accounts.

100% democratic is how senior US leaders described the Ethiopian regime with 100% of the Ethiopian parliament made up of regime hacks, yet Frau Merkel continues to pretend that the present regime has any sort of credibility or future in power.

With almost the entire country up in arms against the regime, and unarmed demonstrators are being gunned down in their hundreds across Oromia, Africa’s largest nation, Frau Merkel has proved once again just how dummkopf European leaders can be.