Agricultural areas in the Gash- Barka region have been making a difference in the provision of agricultural yields to the local Eritrean markets at a fair price.

They have also been creating employment opportunities to the residents of the farm areas. Further, graduates from different institutions in the field of agriculture have been honing their skills by working at the farm projects.

According to the classification of Eritrea’s National Crops and Livestock Corporation, the Western Farm project in the Gash-Barka region is considered one farm zone, with its subdivisions of southwest and northwest farms.

Southwest Farm is known for its abundant activities of livestock breeding and fruits farm. Fruits such as orange, mango, lemon, date palm, guava, grapefruit, among others, are cultivated in this farm zone. Over 40,000 fruit trees have been cultivated in the farm, 30,000 of which are in Gerset Farm which covers around 230 hectares of farmland.

Lemon plantation is mostly available in Aligidir, Adi-Omar and Gerset Farms. Lemon is also grown to a certain extent in Fesko, but grapefruit is only cultivated at the moment in Gerset Farm.

Date palm trees have been cultivated in Gerset and Fanko-Tsmu’e. The total number of date palm in Gerset is 2,000 while that of Fanko-Tsmu’e is 150, which is waiting to be harvested.

When it comes to the vegetables in the Southwest Farm zone, Mr. Hailezgi Habte, manager of Southwest Farm Zone in the Gash-Barka region, said that it has been a priority for a long time. The processing and packaging of tomato paste for local and international markets was the primary object for setting up the farm zone.

Besides tomatoes, onions, pumpkins, potatoes, and pepper have been regularly grown in this farm project, whose harvests are mainly sent to the markets in the central region, particularly Asmara, and the Ministry of Defense.

Most of the tomatoes cultivated in the Southwest Farm have been sent to Alebu Processing Factory to be packed as paste and then sold to colleges while onions, pepper, and other vegetables are being sent to markets in the Central region.

As the primary goal of the farms is to meet the market demands of vegetables, we are looking to augment production, Mr. Hailezgi elaborated.

In its early operation, Alebu Banatom Factory, a food processing plant near Tessenei, used to export tomato paste packed in barrels. Today, the factory is making tomato paste in small size. This year, it has processed and packed 15,000 quintals of tomato paste.

Mr. Hailezgi said, “We have not yet been able to produce tomato at the factory’s capacity of packaging 5,000 quintals of tomato on a daily basis.” 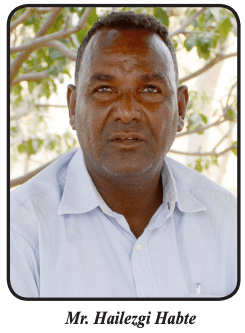 According to Mr. Hailezgi, livestock breeding is the most demanding activity. With the exception of those in Halhale most of the livestock that belong to the Crops and Livestock Corporation are available in great numbers in the Gash-Barka region. Currently, a total of 11,000 sheep, 1,000 cows, 400 oxen for beef production, 400 camels, and goats are available in the four major farm areas.

The livestock from Southwest Farm Zone has been the main source of meat to the local markets. Mr. Hailezgi said that for the last four years Akordet, Forto, and Gogne boarding schools in the Gash- Barka region, butchers in Asmara and Defense Ministry hospitals in the Gash-Barka region have been provided with meat supply from the Crops and Livestock Corporation.

Livestock species known as Gamus and Hameria have been introduced for dairy production in Adi-Omar while the livestock in Gerset and Fanko Tsum’e is used for meat production. Dairy products from the Hameria species in Aligidir have been augmenting butter production.

“We are now looking to take the animal husbandry activity to the next level thanks to the experiences we have acquired so far in the field,” Mr. Hailezghi said.

The residents of Gerset, Ketay, Adi-Omar, Tesenai, Aligidir, and other environs have been earning their living by working at the farms of the southwest projects that are administered by the Crops and Livestock Corporation.

Graduates in Veterinary science and agriculture from Hamelmalo College of Agriculture, Adi-Halo, and Sawa Vocational Training Center have been upgrading their skills through hands-on activities in the farms.