BY ANTHONY CHIBARIRWE | THE TRUMPET

Ethiopia faces a high risk of failure due to continued political and social instability in the country, the Fund for Peace reported in its Fragile States Index Annual Report 2017.

The latest point in this vicious cycle occurred on January 20 when Ethiopian security forces shot and killed at least seven protesters. According to news reports, the protesters were celebrating a religious festival. Then they started chanting anti-government slogans and hurling stones at security officers, who responded by firing bullets.

Reports say the weekend clash was followed by a week of more violent clashes, which resulted in the death of at least 20 civilians.

Much of this bloodshed in Ethiopia is based on ethnic differences and territorial disputes between ethnic regions within the nation.

“Limited attention has been given to outbreaks of violence in Ethiopia, as anti-government protests, particularly in the Amhara and Oromia regions, led to a declaration of a [10-month] state of emergency in October 2016,” the Fund for Peace wrote in its report. “The state of emergency was also used as a tool to crack down on political opponents and media.” 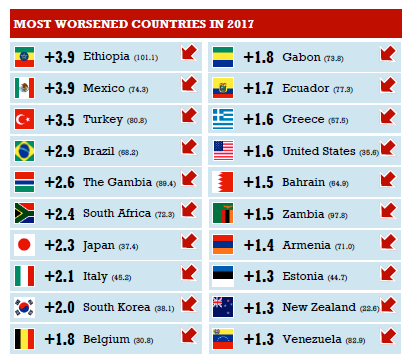 An estimated 400 people have been killed in clashes with security forces in Oromia alone. The increased pressure in 2017 marks a continuation of a long-term worsening trend for Ethiopia, whose score has increased from 91.9 in 2006 to a high of 101.1 in 2017.

At the root of some of the increased pressure in Ethiopia are issues that can be traced to climate risks, as the country faces significant drought conditions and pressures on the food supply; further, competition over, and displacement from, grazing land was attributed as an underlying cause of the violence surrounding the planned annexation of land by the city of Addis Ababa as the government sought to expand its boundaries into neighboring Oromia.

These pressures are borne out in the fact that Ethiopia’s highest indicator score, 9.8, was recorded for Demographic Pressures; interestingly all three of Ethiopia’s worst indicators are social indicators, pointing to added pressure from Group Grievance and Refugees and IDPs.