FLY OLYMPIC and Eritrean Airlines have agreed to a reciprocal code sharing agreement to ensure seamless connections on a single itinerary for customers traveling beyond Asmara through Eritrea and to points in Africa and the Middle East.

In an interview he made with TesfaNews, Fly Olympic CEO Mr. Akis E. Kafala said that an agreement has been reached with the CEO of the National Carrier, Mr. Ghebretnsae Petros and both are very excited about the future of their cooperation.

According to Mr. Akis, the new code share agreement will enable more Eritrean travelers around the world to have access to online bookings or through the Global Distribution Systems (GDS) which practically open up the markets in USA, Canada and the rest of Europe.

Under the code share agreement the two carriers will each place their flight designator code on select flights making it more convenient for travelers with such benefits as a single itinerary, through-checked bags and mutual status recognition.

The first inaugural flight to Asmara from Stockholm – Arlanda “ARN” is scheduled for June 20th on a Boeing 767-300 aircraft which is operated by a transatlantic airline called SkyGreece. 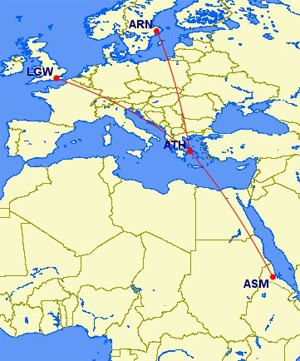 Fly Olympic strives to deliver the most comfortable on-board experience with the fastest route between Eritrea, Sweden and the United kingdom with a single brief transit in Athens.

NasAir Eritrea is now the General Sales Agent (GSA) for all ticketing and Cargo in Eritrea.  Mr. Akis also said they have also secured the license required to transport human remains as well.

Fly Olympic aims to become the leading transporter to and from Eritrea with a plan to expand its routes to all the major countries that are home to Eritrean communities.

With SkyGreece one step closer to Canadian launch, flights connecting Eritrea to North America is not going to be a distant dream.

CEO Akis, however, warns that the people of Eritrea should be aware of certain individuals that do not have the best interest of the people and the country at all. He said, these individuals have been trying to sabotage the program and make life worse for the Eritrean people.

However, thanks for the unwavering support from the people and authorities of Eritrea, Mr. Akis said, the new venture finally comes to a reality with a banging success.