Feyisa Lilesa has Nothing to Fear After Olympic Protest: TPLF

By Thom Patterson | for CNN,

Olympic marathon runner Feyisa Lilesa has nothing to fear because of a protest gesture he displayed as he crossed the finish line, Ethiopia’s communication minister said Monday.

Lilesa won a silver medal Sunday with his arms crossed over his head in a sign of solidarity for his native Oromo people — the largest ethnic group in Ethiopia.

Lilesa said he wanted to draw attention to the government’s ongoing persecution of the Oromos, but he feared that his protest had put himself into such danger that he can’t go home.

Ethiopia’s Communications Minister Getachew Reda described Lilesa as “an Ethiopian hero,” saying he “shouldn’t at all be worried” to return.

Lilesa said he feared he would be killed or imprisoned. Some of his family members are already in prison, he said, and he said he’s worried about the safety of his wife and two children.

Before Reda’s response, Lilesa said he may stay in Brazil or go to Kenya or the United States, depending on whether he can obtain a visa for those moves.

The Oromo make up at least a third of Ethiopia’s 100 million people. But they have been marginalized for decades, with tensions rising recently as the government promoted development that took over over Oromo farmland.

During the past year, huge protests by the Oromos have swept the streets of Ethiopia.

The government was brutal in putting down the demonstrations, nonprofit groups like Amnesty International and Human Rights Watch reported.

“In nine months, more than 1,000 people have been killed,” Lilesa said on Sunday. CNN could not immediately confirm Liesa’s statement. 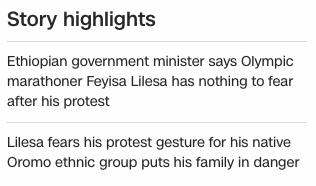 Reda described that statement as “nonsense” but he would not offer a figure for the number of protesters who have died.

“This game of numbers has no merit,” he said.

In a report on the Oromos, Amnesty International said at least 5,000 Oromos were arrested because of peaceful protests or opposition to the government between 2011 and 2014.

According to Human Rights Watch, more than 400 people have been killed and tens of thousands arrested, since November 2015. Thousands more have been jailed, the group said.

“Human Rights Watch’s research indicates that security forces repeatedly used lethal force, including live ammunition, to break up many of the 500 reported protests that have occurred since November 2015,” the group reported on its website.

Reda disputed those numbers and said Ethiopia’s security response to the protests is standard police protocol — to disperse “rioters.” Some protesters have been armed with guns and hand grenades, he said.

As for Lilesa, he’s “is entitled to make” a “political statement. That is his right,” Reda said. “It’s not about holding one political view or another.

It’s unclear if Lilesa’s political gesture will affect his Olympic medal. In the past, the Olympics committee has stripped athletes of their awards for participating in political protests.

One of the most controversial demonstrations took place during the Mexico City games of 1968 when American sprinters Tommie Smith and John Carlos gave the Black Power salute while standing on the award podium during U.S. national anthem.

Smith and Carlos were sent home and banned from the Olympics for life.

But they were treated as returning heroes by the black community for sacrificing their personal glory for the cause.