The smell of yellow daisies and freshly cut grass accompanied by songs of best wishes by a choir of girls going door to door would normally be the ubiquitous phenomenon on this day, Meskerem 1, 2009 (Ethiopian Calendar), as Ethiopians usher in the New Year. Ethiopians use an ancient Orthodox calendar, separate from the rest of the world.

But this New Year’s Day, Enkutatash, is unlike any other.

The just ended 2008 will go down in history as one of the deadliest, if not the deadliest year in Ethiopia’s recent history, as hundreds of people were shot and killed by regime’s security forces.

The protest that began in November in the country’s Oromo region against years of deliberate economic and political marginalization by the minority rule was joined last month by the people in the Amhara region.

Over one thousand people were shot and killed in broad day light by security forces who got the shoot to kill order from regime officials.

Hailemariam Desalegn, the Prime Minister, in a televised address, ordered the use of deadly force against peaceful protesters. His statement came as a shock to the entire nation.

Following that address, the security forces, who were already in a killing spree, intensified their deadly attack against protesters in the Oromo and Amhara regions. 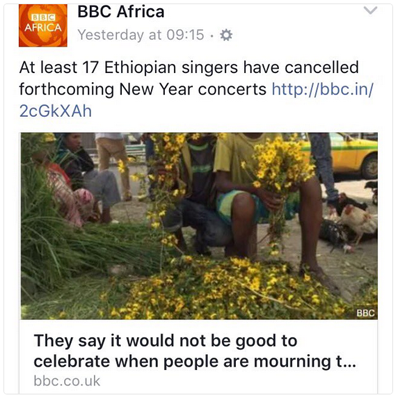 Deeply religious but fun loving Ethiopians, who know how to party, especially when it comes to the New Year, have, this time around, decided to spend the day remembering and paying tribute to those who lost their lives in the cruel hands of regime forces.

Many were actually clad in black attires to mourn the death of peaceful citizens, whose only crime was demanding their political rights and calling for the end of tyranny in their country.

Expressions of solidarity with the protesters and feelings of sorrow and mourning the death of peaceful citizens were the dominant postings among the Ethiopian social media.

As Ethiopians mourn the death of their compatriots on this first day of the New Year, star singers and musicians, who otherwise would have gigs lined up globally on the eve Saturday and today, decided to cancel their shows as expression of their deep sorrow to those killed by the ruthless regime.

Close to 20 singers have cancelled gigs scheduled in Ethiopia, Europe, USA and elsewhere.

Reports that a singer by the name Dan Admasu crossed his arms above his head in a show televised live on the state controlled television has drawn the attention of the Ethiopian social media.

Crossing arms above the head is widely used as a protest sing against the brutal regime in Ethiopia.

The laity spent Sunday praying for the deceased and paying visits to families who lost their loved ones in the cruel hands of the regime.

The synod of the Ethiopian Orthodox Church in exile sent a message to the laity to spend the day praying for and mourning the dead, as well as remembering the tens of thousands incarcerated by the regime, instead of merrymaking in these times of troubles.

Gloom also casts its shadow over Monday, September 12, 2016, the day of Eid Al-Adha for the Ethiopian Muslims, who also suffer from the brunt of the brutality of the regime that falsely accuse them of radicalism.

Ethiopians living everywhere have come together in one voice today, on the first day of the year 2009, to say enough to the bestiality and madness exhibited by an oligarchy that imposes its ruthless rule on the people for the last quarter of a century.