By John Aglionby | for Financial Times,

A wave of anti-government protests and the imposition of a state of emergency has triggered a collapse in tourism bookings in Ethiopia, underlining the effect the unrest is having on one of Africa’s best-performing economies.

As the demonstrations spread across the country, governments, including the US, UK, Australia, Canada and Ireland, have advised their citizens against all non-essential travel to the country or Amhara and Oromia regions at the centre of the instability.

Hailemariam Desalegn, Ethiopia’s prime minister, has said the death toll from the demonstrations, which began last November and have been exacerbated by the authoritarian regime’s brutal crackdown on protesters, could be as high as 500.

Thousands of people have been arrested and the government imposed a state of emergency as it grapples with the biggest threat to the Horn of Africa nation’s stability in years. The protests originally began over land disputes, but the state’s harsh response caused them to spiral into broader protests against the government.

An American woman was killed after being caught up in a protest on the outskirts of Addis Ababa, the capital, this month.

Travel companies said bookings to the country — home to ancient Christian sites and spectacular highlands — have virtually ground to halt as the unrest and travel warnings keep visitors awe.

“Things are effectively on hold,” said Jim Louth, owner of Undiscovered Destinations, a UK travel company. “If anyone inquires, our policy is to say people are being advised not to go.”

Tourism has become an important part of the economy, which has been growing at an annual average of about 10 per cent over the past decade as Ethiopia has attracted increasing levels of foreign investment.

The government estimates the sector contributes about 4.5 per cent of gross domestic product, or $2.9bn. The indirect contribution, through investment, is the same, while about 1.5 million people are thought to earn their living from the industry. 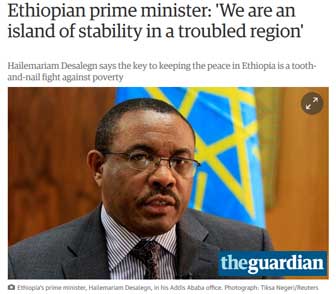 More than 750,000 foreign tourists visited Ethiopia last year, with the US by far the largest country of origin, followed by China, Britain and Germany, according to government data.

The blow to tourism comes amid rising investor uncertainty as foreign companies, particularly flower farms and textile factories, have been targeted in a string of attacks that have caused tens of millions of dollars of damage.

The International Monetary Fund warned just before the state of emergency was imposed this month that attracting foreign investment will be crucial to sustaining the high growth rates.

Some travel companies said one problem is that while some of Ethiopia’s most popular sites — such as the city of Aksum — are not located in Amhara or Oromia, people have to travel through those regions to reach them.

“People on their first visit will want to go to the main sites and not be stressed,” said the UK-based Ultimate Travel Company. “More adventurous travellers might still go to places like the Omo valley that haven’t been affected, but most people will simply wait.”

The Ethiopian Tourism Organisation, a government body, insisted that “all tourist areas of the country are safe”.

“It is as safe now for tourists and business visitors to travel in Ethiopia as it has been for the last 22 years since the new constitution has been introduced,” it said in a statement.

Kiros Mahari, the general manager of the Ethiopian Tour Operators Association, said that “while there has been some unrest for a while, the situation has been restored back to normal”.

Emma Gordon, an analyst at Verisk Maplecroft, a risk consultancy, said such statements “come across as unbelievable”.

“The situation is quieter now than a few weeks ago, but the protests have not stopped,” she said. “Strikes, ‘ghost town days’ and non-violent protests are more common now because they’re so much harder to police, even under the state of emergency.”

Ms Gordon predicted that once the protesters had worked out how to cope with the state of emergency, which bans all protests, political communication on social media, and political gatherings, “there will be an upsurge in unrest”.