Business in the Sululta district of Ethiopia’s Oromia region is burgeoning. So why, despite abundant rainfall, does half the population have no access to fresh water?

BY WILLIAM DAVIDSON | THE GUARDIAN

Towards the end of the day at the Abyssinia Springs bottled water factory near Ethiopia’s capital, Addis Ababa, workers hose down the car park liberally. Outside the gates, residents of the Sululta area trudge along the road with empty yellow jerrycans that they will fill from muddy wells and water points.

Over the past decade, the town in Oromia region has attracted plenty of investment. A Chinese tannery, steel mills, water factories and hotels have sprung up.

The boom has also lured workers for the building sites that litter the district with piles of rubble, electric cables, and eucalyptus tree trunks used for scaffolding.

Officials appointed last year amid a wave of unrest admit that they do not know the exact size of Sululta’s population. The local government has failed to keep up with the town’s chaotic growth over the past decade, which has contributed to anti-government sentiment.

Further protests by the Oromo people, Ethiopia’s largest ethnic group – whose discontent is rooted in claims of injustice and ethnic marginalization, as well as maladministration – could undermine official efforts to rectify the situation, not least those by the head of the water bureau, Messay Tadesse.

Although investing in water infrastructure is challenging for a poor country, funding is not the problem in relatively wealthy Sululta, according to Messay. Instead, he believes corrupt management of the land rush, a lack of demand on investors to protect the environment, and the government’s inadequate planning and data collection have contributed to the crisis.

“When the public burned the investments down, it was not that they wanted to damage them. It was our problem in managing them,” says Messay.

Initially peaceful, the protests that began in Oromia in November 2015 evolved into the angry ransacking of government offices and businesses after security forces used lethal force to disperse crowds. Human rights groups estimate that up to 600 people were killed across the country.

Since then, Ethiopia’s multi-ethnic ruling coalition, the Ethiopian People’s Revolutionary Democratic Front, which controls all the legislative seats in a de facto one-party state, has embarked on what it calls a process of “deep reform” to try to address governance failings.

For years, government officials and their development partners have claimed that funds were spent efficiently on public services for the estimated 103 million people in Africa’s second-most populous nation, citing improvements in socioeconomic indicators such as maternal mortality and access to potable water.

In 2014 – the latest year for which data is available – the Ethiopian government received $3.6 bn (£3bn) in aid, while the government budget was $9bn, which included donor funding. Most cash for regional governments comes from federal transfers. 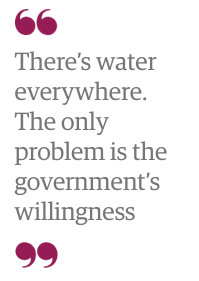 However, the impressive statistics rattled off at development conferences are of little comfort to low-income workers in Sululta, who say they feel ignored by a government that has licensed more than five plants for bottled water while failing to dig enough wells or build pipes to houses. According to WaterAid, 42 million Ethiopians lack access to safe water.

Worku Deme, 40, who delivers cement blocks around Sululta, says the community wrote to government offices two years ago asking for action on water supply. But nothing has changed, he says, beyond the faces of the administrators who ask people to be patient.

“There is no one to care about us,” says Deme, as a woman walks past with a jerrycan strapped to her back.

The situation is especially galling for Sululta because the town is situated in the highlands, where rainfall is abundant for about four months of the year.

The national government, which likes to describe Ethiopia as the “water tower of Africa”, is investing heavily in hydropower, including the continent’s largest dam, in the Nile basin. However, past failures to tap water resources in the rain-deprived east of the country contributed to a fifth of the population needing aid during a drought that began in 2015, killing livestock and causing crops to wither.

In Suluta, there has been investment in boreholes and pumps, but mostly by the private sector. Abyssinia Springs, in which Nestlé Waters bought a majority stake last year, pumps 50,000 litres an hour, which means its capacity is more than half that of the local government.

“There’s water everywhere. The only problem is the government’s willingness,” says a manager at another company, Classy Water, who did not give his name.

Many non-water businesses have dug their own wells.

According to Getachew Teklemariam, a former government economic planner, there has been a lack of water infrastructure planning that takes into account demographic and economic changes across Ethiopia. Instead, development has been piecemeal and household water supply numbers are sometimes inflated by officials for political gain.

“With a lack of insight into the reality on the ground, most efforts at improving infrastructure have been uncoordinated and wasteful,” he says.

In January 2016, the government shelved its “integrated development plan” to expand Addis Ababa into surrounding Oromia areas following protests and criticism that the plan would pave the way for more evictions of Oromo farmers.

Today, locals in Sululta travel on public transport to queue for water at a tap built by the Sudanese-owned Nile Petroleum, or pay others to do so. At the end of the town, which mostly lies along one main road, residents collect water from a faucet provided by China-Africa Overseas Leather Products. But the tannery has been accused of polluting water supplies, and in January 2016 protesters invaded the premises. Last month, it was a base for about 50 Ethiopian soldiers monitoring the security situation.

Messay, a mechanical engineer who has worked in the public water sector for a decade, says the government has erred by placing only minimal demands on investors in its eagerness to create jobs: “They [the leather company] drop their waste downstream. It is killing the farmers’ cattle, it’s making the fertility of the soil deplete.” Managers from the firm did not respond to requests for comment.

Messay appears committed to solving the water problem but realistic. He is critical of property investors from the capital who, he claims, seized plots illegally, and of the “corrupt” land administrators who facilitated the town’s chaotic growth. “You expect them to be more responsible, as they are from a big city,” says Messay of the investors.

Turkish contractors are digging a borehole to increase the water supply, which Messay believes might be meeting half the demand.

Nestlé Waters says it wants to help and is funding Addis Ababa University experts to study the environmental and socio-economic situation of the area. The study might feed into another “integrated” plan and possibly an effort to turn Sululta into an “eco city”. But Messay is sceptical as to whether the corporation’s public interest is genuine, noting that there were similar noises from Abyssinia Springs when the water plant was built about seven years ago.