Ethiopia’s Minister of Minister of Women, Children and Youth Affairs official twitter account has been deleted on Tuesday night, after she slammed Uganda for passing it’s anti-gay law.

In the first remark ever made by an Ethiopian official regarding LGBT people, on Monday evening, Zenebu Tadesse, criticized Uganda’s harsh anti-gay law which imposes life imprisonment for LGBT people and obliges citizens to report anyone they suspect.

There is no place for hate, discrimination in my beloved Africa. It’s not Governments’ business to make dress code or anti-gay laws #Uganda.

Tadesse retweeted some messages of support of her tweet while rebuffing criticism, and stating quite clear that it was condemnation of Uganda’s law, not an endorsement of LGBT rights. 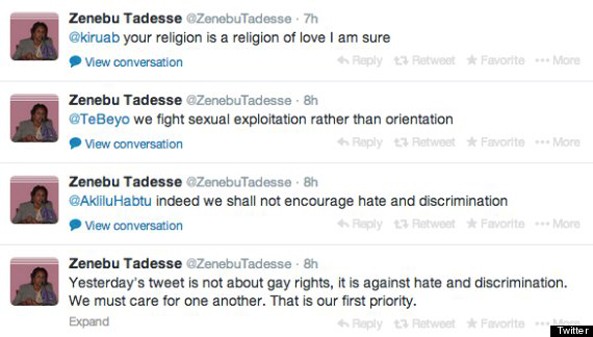 This is to notify that the Honourable Minister’s account was hacked by unknown person(s). We are rectifying the matter.

Please disregard all other tweets sent from this account meanwhile, as they are not from the Honourable Minister.

Many twitter users from Ethiopia stated that they that she was forced to retract her statement as it was to progressive and may face both local and inter-African backlash.

The Twitter account of minster Zenebu Taddesse was hacked and the condemnation tweets against the recently signed Ugandan anti-homosexuality bill and ban on miniskirts doesn’t reflect the minster and Ethiopian government stance at all, they are all tweeted by anonymous hackers not by the minster.

The government is investigating the matter and the identity of the hackers and we will take appropriate measures once the hackers are identified.

Tadesse herself told to Tadias Addis, an online newspaper:

I’m really saddened and traumatized by the action of the hackers, this is neither mine nor the government view, homosexuality is a crime under the Ethiopian criminal code.”
How can I say this, it doesn’t even fit with my personality at all.

Ethiopia has already a harsh anti-gay law which punish same-sex acts with up to 15 years imprisonment.

In addition, under its anti-terrorism law anyone who states what the government deems terrorism (which can include human rights criticism) can be imprisoned for 20 years, without a warrant.

Ethiopia’s anti-advocacy law bars charities and nongovernmental organizations that receive more than 10 percent of their funding from abroad from participating in activities that advance human rights and the promotion of equality.

Essentially these three laws taken in total make it impossible for any health-services, charity, advocacy or even clubs or bars to openly support or cater for Ethiopia’s LGBT population

Reacting to news, Mercy (pseudonym to protect his identity), director of the underground Rainbow Ethiopia, a health and support group for Ethiopian LGBT people, told me:

I don’t think the minster account is hacked, she must have been silenced or scared away by the backlash. But we still appreciate her good intention and support

Soleyana, a Human Rights activist from Ethiopia told me:

Her account was not hacked, this was just silencing from her own government.
We know that Freedom of Expression is curtailed in Ethiopia.

The deletion of her twitter account is a bad sign that different opinions on Human Rights issues are not entertained within the ranks’ of Ethiopia’s government.

Daniel Berhane, one of Ethiopia’s most prominent bloggers stated:

The mere fact that a single not-that-much-pro-gay statement resulted in the death of Zenebu’s twitter account probably speaks volumes on the direction to which the leadership is leaning.

The dead twitter account of Minister Zenebu can be taken as a symbolism of the looming danger on real and perceived Ethiopian gays.

International human rights advocates also reacted to the news of the removal of Taddesse’s twitter account and the subsequent official rebuttal.

It is wonderful that the Ethiopian minister took a stand against Uganda’s harsh new anti-gay and dress code laws but shameful that she was pressured to renounce it.
This is symptomatic of the way liberal, progressive Africans are being forced into silence by repressive governments. It is a violation of the principles of the African Charter on Human and People’s Rights.

While Senator Lisa Shoman, one of the leading politicians of the Caribbean, a Human Rights lawyer, and former Foreign Minister of Belize said:

As a human rights advocate and political activist I am concerned about the ‘silencing’ of Minister Tadesse’s voice on the Twitter.
As a woman I am concerned that a vital voice on anti-discrimination and hate may have been compelled to retract her stance.

Neither is acceptable, nor is the apparent violation of the freedom of speech.

I am more concerned now, than ever for her safety.

Bravery has its own reward and in this case, punishment. We are, none of us free, until we are all free.

While activist Melanie Nathan, a native of South African commented:

The fact that the Minister is now being silenced is indicative of how hard it actually is for Africans who understand homosexuality and it’s unjustified oppression to speak.

TesfaNews believes that Minister Zenebu Tadesse was forced to delete her twitter account once and for all by none other than Dr. Debretsion Gebremichael, the country’s Minister of Communication and Information Technology and one of the three deputy prime ministers.

Here is our argument:

When Zenebu posted her clumsy comment against Ugandan anti-gay law, it took no time to catch the attention of the mainstream media. The story blown out of control on different media outlets including here at TesfaNews. That creates uneasiness with in the Ethiopian government and Minister Zenebu herself. The best they can think of to put out the blown out story was to force her retract her previous comments and blame it squarely on a certain ‘hacker’.

Dr. Debretsion, however, looks like he read the news first time from TesfaNews as he re-tweeted it after for my surprise.  The irony was he just opened his twitter account (@GebremichaelD) for the first time on that same day (25th Feb).  In a move that looks almost like scanning his ministers tweets to save from another embarrassing situation, he come across with another very disturbing Tweet and this time from his Foreign Minister Dr. Tedros Adhanom (@DrTedros).

Dr. Tedros was tweeting the following: “Ethiopia fast catching up with #SouthKorea in child mortality rate“.  The attached graph shows in fact quite the opposite.

Fact is, Ethiopia might need a century to catch up with South Korea on child mortality rate. Here is the facts: South Korea (4), Eritrea (52), Rwanda (55), Ethiopia (68), Uganda (69), Sudan (73), Kenya (73), Djibouti (81), South Sudan (104) and Somalia (147). He would have saved himself from some shame if he at least compare his country with one of the neighboring African countries like, “Ethiopia fast catching up with #Eritrea in child mortality rate“.

Debretsion wasted no time to order his foreign minister, in CAPITAL letters, to delete that shameful tweet as soon as possible.

Dr. Tedros feels somewhat threatened and refused to delete the tweet. But for not to infuriating the Deputy prime minister any further, he posted another tweet that reads: “Ethiopia’s wealth of surprises“. This time Debretsion sighed and replied back: “@DrTedros much better. Lets do lunch next week.”

This shows how much Dr. Debretsion is commanding his ministers to the point that he ordered them to DELETE tweets that he is not happy with let alone a mere Minister’s personal twitter account that brought shame and huge political lose with neighboring Uganda.