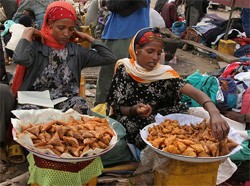 Ethiopians awoke Tuesday to news that food prices had increased nearly 50 % over the past year. They didn’t need to be told. Even middle-class Ethiopians are finding it more difficult to feed their families.

Ethiopia’s annual inflation rate jumped to nearly 40 % in July.  The Central Statistics Agency says food prices, which comprise more than half the Consumer Price Index, were up 47.4 % from a year ago.

In local markets, faces were glum, but few were willing to talk about their condition.  One shopper, who gave his name as Geremew, simply held up the thick wad of birr, the Ethiopian currency, that he was holding as he waited to pay for a small basket of food.

Mansour Mohammed, a grocer in central Addis Ababa, says prices of essentials such as cooking oil have risen much more than the average, forcing consumers to switch to cheaper alternatives. “People say that’s expensive.  Once you [could] buy vegetable oil 20 birr, [approx.$1.25] now it’s 60 birr ($3.75).  It’s almost 200 % increase.  But you can change.  Instead of vegetable oil you can use palm oil,” he said.

The statistics agency says transportation costs and housing were up more than 40 % during the past year. The price of a liter of gasoline stood at 21 birr this week, a massive increase despite government promises to keep inflation in single-digit territory.

When prices began to shoot skyward earlier this year, the government imposed price controls on a number of items and began selling sugar and cooking oil directly to consumers.  But the controls led to shortages, and were dropped after infuriating shop owners and failing to ease inflationary pressure.

While the price caps were in place, shopkeepers were accused of keeping goods off the market until prices rose.  But after the controls were removed, shortages continued and prices surged.

Government economists say the inflation rate is being driven largely by the drought that is crippling food production in parts of the Horn of Africa.  But others, such as opposition leader and former World Bank director Bulcha Demeksa, says factors such as government land policy and corruption are just as much to blame.

“The farmers are not producing enough.  There is commotion in the agriculture sector.  Commotion meaning the farmer’s mind is not at rest.  He is not even sure whether the local officials are going to take his particular plot or not.  These are people who take a small bribe and take land from one and give it to the other, and [so] people do not produce as much.  The population is increasing; production is not increasing because of government land policy,” Bulcha said.

Government statistics indicate more than 13 million of Ethiopia’s 80 million people will receive some sort of nutritional assistance this year.  About 4.5 million are in urgent need of help, and emergency food stocks are stretched by the arrival of an additional 150,000 refugees from famine-stricken Somalia.

Despite the difficulties, the government is predicting economic growth of 11 % this year.  The International Monetary Fund says inflation troubles are likely to cut that figure by half.