None of the 157 people on board an Ethiopian Airlines plane that crashed on Sunday morning en route to Nairobi from Addis Ababa has survived, the airline said.

Thirty-three nationalities were on board flight ET 302, which crashed near the town of Bishoftu, about 50km southeast of the Ethiopian capital, the state broadcaster reported.

Thirty-two Kenyans, 18 Canadians, 9 Ethiopians, 8 Chinese, 8 Americans, and 7 British citizens were among the dead, according to the airline. Four of the victims held United Nations passports.

The flight took off at 8:38 am (06:38 GMT) from Bole International Airport and “lost contact” six minutes later near Bishoftu.

Prime Minister Abiy Ahmed’s office tweeted it “would like to express its deepest condolences to the families of those that have lost their loved ones on Ethiopian Airlines Boeing 737 on a regular scheduled flight to Nairobi, Kenya this morning.”

Kenya’s President Uhuru Kenyatta offered prayers for the family members and loved ones of those on the flight.

“We are saddened by the news of an Ethiopian Airlines passenger aircraft that is reported to have crashed 6 minutes after takeoff en route to Kenya. My prayers go to all the families and associates of those on board,” Kenyatta said on Twitter.

The Office of the PM, on behalf of the Government and people of Ethiopia, would like to express it’s deepest condolences to the families of those that have lost their loved ones on Ethiopian Airlines Boeing 737 on regular scheduled flight to Nairobi, Kenya this morning.

We are saddened by the news of an Ethiopian Airlines passenger aircraft that is reported to have crashed 6 minutes after takeoff en route to Kenya. My prayers go to all the families and associates of those on board.

The airline said it would send staff to the accident scene to “do everything possible to assist the emergency services”.

Al Jazeera’s Catherine Soi, reporting from Nairobi airport, said an “information and service desk has been set up for the relatives looking for information”.

“Some of them [passengers on board] could have been Kenyans and diplomats perhaps coming for a very important UN conference here in Nairobi that’s supposed to start tomorrow,” she said.

The Boeing 737-800MAX is the same type of plane as the Indonesian Lion Air jet that crashed last October, 13 minutes after the takeoff from Jakarta, killing all 189 people on board.

The last major accident involving an Ethiopian Airlines passenger plane was a Boeing 737-800 that exploded after taking off from Lebanon in 2010, killing 83 passengers and seven crew members.

US aerospace giant Boeing said it was “deeply saddened” by the accident and would provide technical assistance to find out why its aircraft crashed.

“A Boeing technical team is prepared to provide technical assistance at the request and under the direction of the US National Transportation Safety Board.” 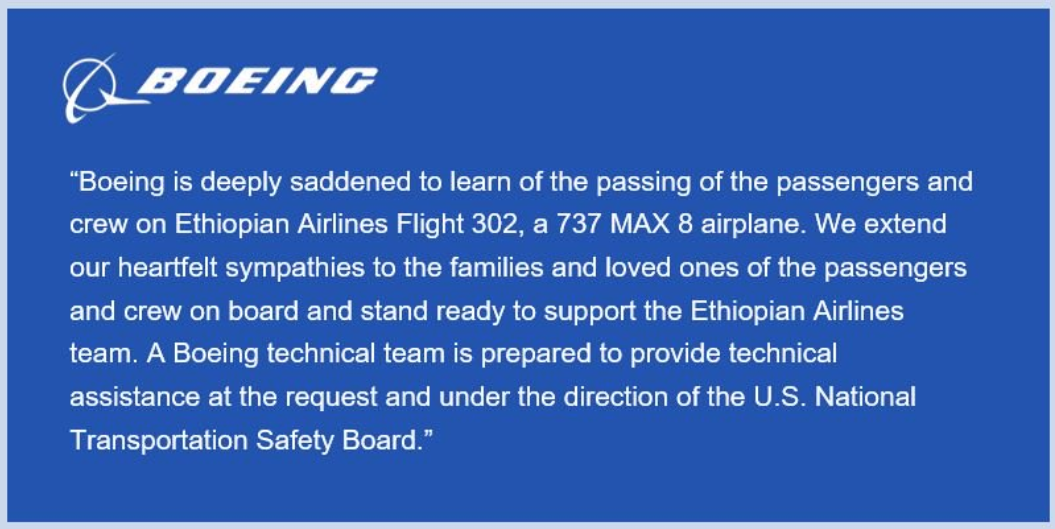 Speaking to Al Jazeera from Malaga, Spain, aviation analyst Alex Macheras explained that the 737 MAX is the brand new updated version of the Boeing 737.

“The MAX is in service all around the world. Airlines such as the Ethiopian Airlines are using this aircraft, as it is the latest, the most fuel-efficient, short-range Boeing aircraft on the market.

“The aircraft that has been involved in the accident today is less than four months old. It was delivered to Ethiopia in mid-November, when it flew from the US, made a fuel stop in Ireland, and was delivered to Addis Ababa, which is the hub of Ethiopian Airlines,” he added.

Macheras said new aircraft “do have their hiccups” but that is not to say they are unsafe or more prone to being involved in accidents.

“There are certain advisories for lots of new aircraft and that’s perfectly normal as they enter the market place,” he added.
The Boeing 737 MAX was initiated in response to Airbus’s A320 Neo. Both planes feature modifications to make the aircraft more fuel-efficient.

“It’s a very safe aircraft,” Macheras said, “but of course this accident will send jitters across the industry.”