The number of those killed in yesterday’s protest in Woldia Town in connection to the Epiphany festival reached seven after security forces opened fire at the festival goers, the Northern Wolo Zone Police Department Head, Commander Amare Goshu, told the regional broadcaster Amhara TV, this evening.

The police commander said, one member of the security force and other six civilians were killed, while several others sustained severe injuries.

The killing occurred on the second day of the annual celebrations of Timket, (Epiphany), an outdoor festival involving several activities.

At the end of the procession, the youth have continued singing and dancing while marching through the town; at some point, the songs have changed into anti-government protest songs,” said one resident in a phone interview with reporters.

The commander also confirmed that the clashes have continued throughout today and saw several cars, houses and hotels burned down.

According to another source, there were “heavy security presence, including members of the federal army and the region’s police forces” throughout the festival since last Friday.

According to Alemayehu Yemiru, members of the federal army and the Amhara regional state, special security forces have not left the town since the first week of December 2017 and hundreds of heavily armed security forces were dispatched to the festival areas including the church premises, which is very disturbing to see.

On December 03, 2017, a football match planned to happen between Mekelle city and Woldiya city was canceled after protests have erupted in the city the previous day resulting in damages to several properties including some owned by businesses from Tigray regional state. 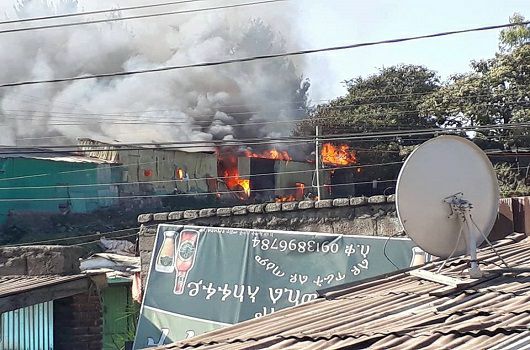 A week later Tigrayan students from the Woldiya University have briefly left their campus for fear of ethnic clashes. They were quickly returned following interventions from local elders.

Alemayehu says further crackdown may follow today as protests were happening in various parts of the town denouncing yesterday’s killings. The internet has been cut off since yesterday afternoon, making obtaining pictures of the scene hard.

Woldiya is town located some 510 km north of the capital Addis Ababa, in the Amhara regional state.

* The Reporter and Addis Standard contributed to the story