At least ten people were killed today and 20 more wounded in a fresh round of protest that started on Tuesday October 24 in Ambo city, 125 km west of Addis Abeba and one of the epicenters of the 2014 – 16 Oromo protests.

Earlier in the morning, a student at Ambo University told Addis Standard that at least five people were killed by “security forces in the middle of a swelling protest.”

However, according to the latest information from Gadisa Desalegn, Ambo city communication head, who spoke to the DW Amharic news, the ten people were shot dead by “members of ‘Agazi’ forces”.

The controversial Agazi forces are anti-insurgency military forces who are sent out in protesting areas in the country, a practice that became common after the 2005 deadly post general elections. However, Addis Standard’s sources from the city say a large contingent of the regular federal army are also deployed in the city.

“We never saw the level of military forces deployed in the city even during the peak times of last year’s protest,” Alemu Dechasa, a shop owner told Addis Standard by phone.

A truck belonging to Dangote Cemenet was also set ablaze by what Alemu said was a “deliberate act by the security forces in order to have excuses to crack down on protesters.”

Addis Standard cannot verify this claim, but pictures show that the truck is indeed torched. It is also not clear if there were causalities as a result of this particular incident.

In the morning, Addisu Arega Kitessa, head of Oromia Government Communication Affairs Bureau, wrote in Afaan Oromo that “lives were lost and people were wounded“. He also called on the people of Ambo to restrain from acts that would result in “unnecessary sacrifices.”

The latest protest began on Tuesday when a group of young men from the city surrounded and blocked trucks allegedly loaded with Sugar, a scandal hit scarce commodity Ethiopia is struggling to supply to its citizens.

This is the second time in just two weeks that protests in Ambo flared. On October 11, a video received by Addis Standard, which was later verified, showed that thousands of young protesters marched through the city chanting “down, down Woyane” in reference to TPLF, the all too powerful member of Ethiopia’s ruling coalition, EPRDF.

However, the protests went largely peaceful and no causalities were reported. 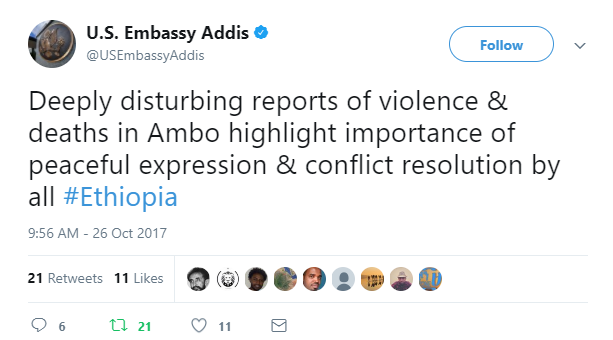 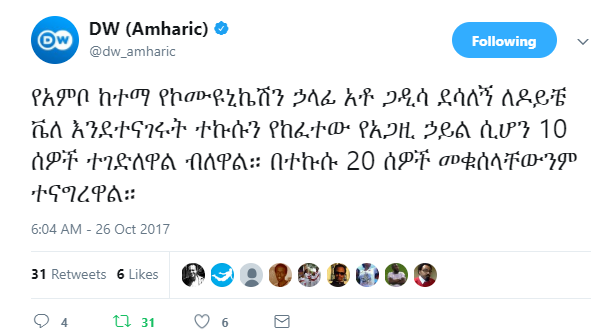 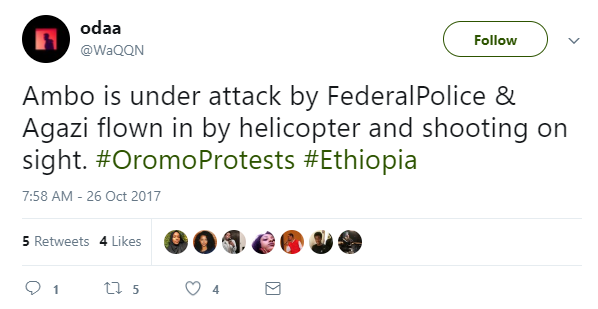