It may be Ethiopia’s symbol of national pride, but the controversial Grand Ethiopian Renaissance Dam (GERD) being built for hydroelectric power on the Blue Nile will have grave and unexpected consequences for its downstream neighbour, Egypt, according to a report published in the US.

The multi-year study of Egypt’s Nile Delta estimates that GERD could reduce the flow of water to Egypt by as much as 25%, restricting its fresh water supply and diminishing its ability to generate power.

These are already matters of contention between the two countries, but the study published by the Geological Society of America (GSA) flags up another, unexpected risk – that of the eventual submerging of parts of the low-lying Nile Delta region under the waters of the Mediterranean Sea.

In their paper published in the journal, GSA Today, Jean-Daniel Stanley and Pablo L. Clemente argue that GERD’s restriction of Nile-born silt onto the delta, combined with sinking of the delta due to natural seismic compaction, could mean that parts of delta surface now above sea level will be underwater by the end of this century.

The scientists call for some form of arbitration by regional or global bodies to be applied to the “delicate situation”.

They worry, too, about the wider region, where some 400 million people live in the 10 countries along the Nile, with some now already experiencing severe droughts and unmet energy needs and “a multitude of economic, political, and demographic problems”.

The soil-rich delta evolved as the result of natural conditions involving the Nile’s fresh water flow and transport of sediment northward from Ethiopia, across Sudan and Egypt to the Mediterranean. 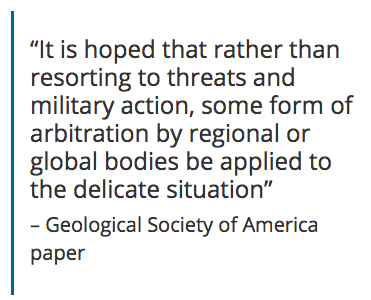 About 70% of water flow reaching Egypt is derived from the Blue Nile and Atbara rivers, both sourced in Ethiopia.

Over the past 200 years, rapidly increasing human activity has seriously altered flow conditions of the Nile. Emplacement in Egypt of barrages in the 1800s, construction of the Aswan Low Dam in 1902, and the Aswan High Dam in 1965 have since altered water flow and distribution of nourishing organic-rich soil in the delta.

Egypt’s population has rapidly swelled to about 90 million, with most living in the soil-rich Lower Nile Valley and Delta. These two areas comprise only about 3.5% of Egypt’s total area, the remainder being mostly desert.

Due to much-intensified human impact, the delta no longer functions as a naturally expanding fluvial-coastal centre.

Less than 10% of Nile water now reaches the sea, and most of the nutrient-rich sediment is trapped in the delta by a dense canal and irrigation system.

The low-lying delta plain is only about 1m above present sea level. The northern third of the delta is lowering at the rate of about 4-to-8mm per year due to compaction of strata underlying the plain, seismic motion, and the lack of sufficient new sediment to re-nourish the delta margin being eroded by Mediterranean coastal currents.

While the coastal delta margin is being lowered, sea level is also rising at a rate of about 3mm per year. Delta lowering and sea-level rise thus accounts for submergence of about 1cm per year.

At present rates, saline intrusion is now reaching agricultural terrains in central delta sectors, and the scientists say parts of delta surface will be underwater by the year 2100.

Ethiopia, itself energy-poor and undergoing drought conditions, is nearing completion of GERD, the largest hydroelectric dam in Africa.

The large reservoir behind the dam is to be filled over a period lasting up to seven years, during which it is expected that the amount of Nile flow to the delta will be reduced by as much as 25%, the scientists say.

This down-river decrease of Nile fresh water will produce “grave conditions”, they add.

Without GERD, the Nile supplies around 97% of Egypt’s present water needs, with only 660 cubic meters per person, one of the world’s lowest annual per capita water shares.

With a population expected to continue surging, Egypt is projected to experience critical fresh water and food shortages.

“It is hoped that rather than resorting to threats and military action, some form of arbitration by regional or global bodies be applied to the delicate situation,” the authors write.