The uniquely African Empire of Ethiopia has seen itself launched into a peaceful revolution that promises to transform one of the planets poorest countries into a modern peoples democracy.

Being that I have spent my entire life living by the principle of “political power grows from the barrel of a gun”, or as Marx said, “Force is the midwife of change”, to see a peaceful revolution next door in Ethiopia is almost too much to grasp hold of.

I first thought this was a “soft coup” by the Americans, but this is much more than that. American acquiescence was necessary, but the new government led by Dr. Abiy Ahmed has started what can only be called a revolution.

Prime Minister Abiy, elected such by a parliament 100% appointed by the former regime is young, charismatic and has put forward a program of change that is remarkably similar to what Eritrea’s President Isaias Afwerki has been saying for the past 25 years and more.

Calling on all Ethiopians, the good Doctor, past soldier, intelligence officer and for the past eight years a politician, is urging his countrymen and women to learn from socialist Eritrea next door.

He has suggested the Ethiopian diaspora emulate the Eritreans and start donating $1 a day to their homeland. National service and national education training centers such as Eritrea’s Sawa are being discussed. And of course, if Ethiopia is really to begin to break with its history of debt bondage and beggary, the Ethiopian diaspora, like the Eritreans, will have to start paying an income tax on their foreign earnings of 2 percent.

Eritrea, four million population, gathers $300 million a year or more from its diaspora so Ethiopia should be able to make a serious dent in its budget deficit by introducing the 2% income tax.

PM Abiy’s task is a giant one, for Ethiopia is a big country with many different ethnic groups and like Eritrea next door roughly half Muslim and half Christian. A divide and rule policy of instigating ethnic-based conflict by the previous regime has left the country burnt and bleeding, with almost one million people internally displaced.

On top of this, almost perennial drought and famines have wracked the land brought on by western industrialization induced climate change.

Ethiopia should be a thriving country with a well-off citizenry for it has rich lands, lots of water, minerals and even energy. The problem has been its leaders this past century starting with Haile Sellasie, “Emperor”. His claim to power was based on his grandfather’s use of Italian supplied firearms to conquer and loot their neighbors, mostly the Oromo, of whom the new PM derives from.

Once in power having completely subjugated the Oromo, amongst others, Haile Sellasie turned his eyes toward the coast and the dream of having his own port on the Red Sea. This meant annexing the Italian colony of Eritrea with its much more advanced economy and of course, the ports of Assab in the south and Massawa in the north.

The violent subjugation of Eritrea is central to the modern history of Ethiopia and today Ethiopians see the recent development of peaceful relations as God’s blessing. 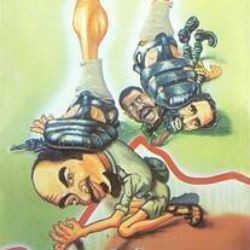 The Eritreans fought a 30-year independence war which helped trigger the overthrow of HaileSellasie and eventually would see the Eritrean rebel army defeat HaileSellasie’s replacement Colonel Mengistu Hailemariam’s army and drive him into exile in Zimbabwe.

The Eritreans left their erstwhile allies the Tigrayan rebel army in control of Ethiopia and returned to their main task of establishing their newly independent country.

When two years later the Eritreans formerly declared their independence and joined the UN, the Tigrayan dominated government did its best to sabotage international recognition for with independence came the loss of control of its main port of Assab. Never mind Eritrea gave Ethiopia rent-free use of Assab, the prestige lost in losing Eritrea to independence drove the new Ethiopian government controlled by the ethnic minority Tigrayan regime to reignite Ethiopian national chauvinism and eventually, just seven years after Eritrean independence, a new war of conquest was launched in 1998.

After three years of particularly bloody warfare, probably the last major land war in history, and 123,000 Ethiopian dead alongside 19,000 Eritrean martyrs (these are the official government figures) with 1.4 million Eritreans internally displaced by the Ethiopian invasion (40% of Eritrea’s population) has left both countries peoples indelibly scarred.

Following the defeat of the Ethiopian invasion, the Tigrayan regime began what came to be known as No-War No-Peace on Eritrea’s border, every few years sending division strength military incursions into Eritrea forcing Eritrea to maintain a large army of national service military on active duty in its trenches along the border.

The main player in all of this, and something almost entirely excluded from a mention by the MSM, has been Pax Americana, with the Clintonites and their kissing cousin Barack Obama dominating the list of criminals who instigated and supported these past 25 years of conflict in the Horn of Africa.

Today’s revolution in Ethiopia has ended all this and with a young, dynamic leader, only 42 years old and sounding like a younger version of Eritrea’s Issias Aferworki, speaking the language of peace and love, communal and national harmony and cooperation, is still having to deal with violent outbreaks i.e. attacks on former regime leaders businesses and properties, communal violence in the south, and continued resistance by former regime supporters still occupying administrative post in Oromia and Afar.

Dr. Abiy is promising a future and outlining inspiring plans on how to achieve it beginning with peace with his neighbors and the end to communal strife in Ethiopia. He speaks directly to the hearts and minds of all Ethiopians in a way almost religious, addressing the importance of loving oneself and one’s neighbors instead of relying on the gun to define society. Now I am not a romantic or religious but his words strike a chord with all people of good heart and gives one hope that here in one of the most strife-torn, famine-wracked places on the planet there is hope.

Of course, it takes unity and hard work, something Dr. Abiy uses Eritrea and Eritreans as role models for the Ethiopian people, going so far as to only half-jokingly declare himself Eritrea’s unofficial foreign minister, the better to fight the lies being spread about our country.

Eritrean President Issias Aferworki has visited Ethiopia’s capital Addis Ababa and sealed the deal so to speak, demonstrating to the Ethiopian people his and our entire country’s sincere desire for peace and friendship between both of us, all too similar and all too different.

As Dr. Abiy continues his path of independence and close relations with Eritrea expect to see a growing wave of criticism, maybe even demonization, once his “honeymoon” period with the western media goes stale and the anti-socialist zealots in the west raise a hue and cry alleging “lack of democratic process” and alleged “human rights abuses”.

Towards the end of his speech at the unity music concert in Addis Ababa on Sunday, July 15, Dr. Abiy, in addressing the problems facing the country told his listeners, almost entirely under 30, not to worry, “Isaias is leading us” as in Eritrean President Isaias Aferwerki.

It hasn’t taken long for the cat to get out of the bag so to speak and the influence of “Wedi Afom” as Dr. Abiy calls Isaias, is now a matter of public record. Maybe we should be calling Ethiopia’s peaceful revolution a “Soft Coup” by Eritrea.

Thomas C. Mountain is an independent journalist in Eritrea, living and reporting from here since 2006. See thomascmountain on Facebook or best contact him at thomascmountain at g mail dot com