Ethiopia’s peaceful uprising is evolving into an armed uprising and may soon reach a point of no return.

What began as a regional protest movement in November 2015, is in danger of becoming a fully-fledged armed uprising in Ethiopia.

Angered and exasperated by the government’s intransigence and duplicity, small guerrilla groups made up of local armed people have formed in Amhara and elsewhere, and are conducting hit and run attacks on security forces. Fighting at the beginning of January in the North West region of Benishangul Gumuz saw 51 regime soldiers killed, ESAT News reported, and in the Amhara region a spate of incidents has occurred, notably a grenade attack on a hotel in Gondar and an explosion in Bahir-Dah.

In what appears to be an escalation in violence, in Belesa, an area north of Gondar, a firefight between ‘freedom fighters’, as they are calling themselves, and the military resulted in deaths on both sides. There have also been incidents in Afar, where people are suffering the effects of drought; two people were recently killed by security personnel, others arrested. The Afar Human Rights Organization told ESAT that the government has stationed up to 6000 troops in the region, which has heightened tensions and fuelled resentment.

Given the government’s obduracy, the troubling turn of events was perhaps to be expected. However, such developments do not bode well for stability in the country or the wider region, and enable the ruling regime to slander opposition groups as ‘terrorists’, and implement more extreme measures to clamp down on public assembly in the name of ‘national security’.

Until recently those calling for change had done so in a peaceful manner; security in the country – the security of the people – is threatened not by opposition groups demanding human rights be observed and the constitution be upheld, but by acts of State Terrorism, the real and pervasive menace in Ethiopia.

Oromia and Amhara are homelands to the country’s two biggest ethnic groups, together comprising around 65% of the population. Demonstrations began in Oromia: thousands took to the streets over a government scheme to expand Addis Ababa onto Oromo farmland (plans later dropped), and complaints that the Oromo people had been politically marginalised. Protests expanded into the Amhara region in July 2016, concerning the appropriation of fertile land in the region by the authorities in Tigray – a largely arid area.

The regime’s response has been consistently violent and has fuelled more protests, motivated more people to take part, and brought supressed anger towards the ruling EPRDF to the surface. Regional, issue-based actions, quickly turned into a nationwide protest movement calling for the ruling party, which many view as a dictatorship, to step down, and for democratic elections to be held.

Unwilling to enter into dialogue with opposition groups, and unable to contain the movement that swept through the country, in October 2016 the government imposed a six-month ‘State of Emergency’. This was necessary, the Prime Minister claimed, because, “we want to put an end to the damage that is being carried out against infrastructure projects, education institutions, health centers, administration and justice buildings,” and claimed, that “we put our citizens’ safety first”.

The extraordinary directive, which has dramatically increased tensions in the country, allows for even tighter restrictions to be applied – post an update on Facebook about the unrest and face five years imprisonment – and is further evidence of both the government’s resistance to reform and its disregard for the views of large sections of the population.

The directive places stifling restrictions of basic human rights, and as Human Rights Watch (HRW) states, goes “far beyond what is permissible under international law and signals an increased militarized response to the situation.”

Among the 31 Articles in the directive, ‘Communication instigating Protest and Unrest’ is banned, which includes using social media to organize public gatherings; so too is ‘Communication with Terrorist Groups’, this doesn’t mean the likes of ISIS, which would be reasonable, but relates to any individual or group who the regime themselves define as ‘terrorists’, i.e. anyone who publicly disagrees with them. 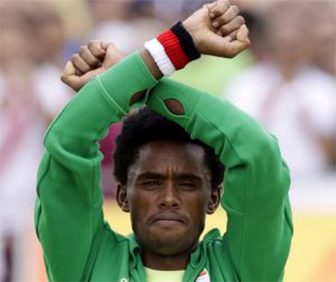 The independent radio/TV channel, ESAT (based in Europe and America) as well as Oromia Media meet the terrorist criteria and are high up the excluded list. Public assembly without authorization from the ‘Command Post’ is not allowed; there is even a ban on making certain gestures, “without permission”. Specifically crossing arms above the head to form an ‘X’, which has become a sign of national unity against the regime, and was bravely displayed by Ethiopian marathon runner Feyisa Lilesa, at the Rio Olympics (where he won a silver medal).

If anyone is found to have violated any of the draconian articles they can be arrested without charge and imprisoned without due process. The ruling regime, which repeatedly blames so called ‘outside forces’ for fueling the uprising – Eritrea and Egypt are cited – says the new laws will be used to coordinate the security forces against what it ambiguously calls “anti-peace elements”, that want to “destabilize the country”.

Shortly after the directive was passed, the government arrested “1,645 people”, the New York Times reported, of which an astonishing 1,220 “were described as ringleaders, the rest coordinators, suspects and bandits.”

All of this is taking place in what the ruling regime and their international benefactors laughably describe as a democracy. Ethiopia is not, nor has it even been a democratic country. The ruling EPRDF party, which, like the military, is dominated by men from the small Tigray region (6% of the population) in the North of the country, came to power in the traditional manner – by force; since its accession in 1992 it has stolen every ‘election’.

No party anywhere legitimately wins 100% of the parliamentary seats in an election, but the EPRDF, knowing their principle donors – the USA and UK – would sanction the result anyway, claimed to do so in 2015. The European Union, also a major benefactor, did, criticize the result; however, much to the fury of Ethiopians around the world, President Obama speaking after the whitewash, declared that the “elections put forward a democratically elected government.”

Since the start of the protests the Government has responded with force. Nobody knows the exact number of people killed, hundreds certainly (HRW say around 500), thousands possibly. Tens of thousands, perhaps hundreds of thousands, have been arbitrarily arrested and detained, probably tortured, definitely mistreated; family members of protestors, journalists and opposition politicians, are intimidated and routinely persecuted. And whilst 10,000 people have recently been released, local groups estimate a further 70,000 remain incarcerated and the government has initiated a new wave of arrests in which young people have been specifically targeted.

Amongst the list of violent state actions – none of which have been independently investigated – the incident at Bishoftu, which many Ethiopians describe as a massacre, stands out. On 2nd October millions of ethnic Oromos gathered to celebrate at the annual Irreecha cultural festival. There was a heavy, intimidating military presence including an army helicopter; anti-government chants broke out, people took to the stage and crossed their arms in unity. At this democratic act, security forces responded by firing live ammunition and teargas into the crowd.

The number of casualties varies depending on the source; the government would have us believe 55 people died, though local people and opposition groups claim 250 people were killed by security forces. The ruling regime makes it impossible to independently investigate such incidences or to verify those killed and injured, but HRW states that, “based on the information from witnesses and hospital staff…it is clear that the number of dead is much higher than government estimates.”

A week after the Nightmare at Bishoftu, the ruling party enforced its State of Emergency. Another ill-judged pronouncement that has entrenched divisions, strengthened resolve and plunged the country into deeper chaos. Such actions reveal a level of paranoia, and a failure to understand the impact of repressive rule. With every controlling violent action the Government takes, with every innocent person that it kills or maims, opposition spreads, resistance intensifies, resolve grows stronger.

The Ethiopian revolt comes after over two decades of rule by the EPRDF, a party whose approach, despite its democratic persona, has been intensely autocratic. Human rights declared in the liberally worded constitution are totally ignored: dissent is not allowed nor is political debate or regional secession – a major issue for the Ogaden region, which is under military control.

There is no independent media – it is all state owned or controlled, as is access to the Internet; journalists who express any criticism of the ruling regime are routinely arrested, and the only truly autonomous media group, ESAT is now classed as a terrorist organization. Add to this list the displacement of indigenous people to make way for international industrial farms; the partisan distribution of aid, employment opportunities and higher education places; the promulgation of ethnic politics in schools, plus the soaring cost of living, and a different, less polished Ethiopian picture begins to surface of life than the one painted by the regime and donor nations – benefactors who, by their silence and duplicity are complicit in the actions of the EPRDF government.

People have had enough of such injustices. Inhibited and contained for so long, they have now found the strength to demand their rights and stand up to the bully enthroned in Addis Ababa. The hope must be that change can be brought about by peaceful means and not descend into a bloody conflict. For this to happen the government needs to adopt a more conciliatory position and listen to the people’s legitimate concerns.

This unprecedented uprising may be held at bay for a time, restrained by force and unjust legislation, but people rightly sense this is the moment for change; they will no longer cower and be silenced for too much has been sacrificed by too many.

Graham Peebles is director of the Create Trust. He can be reached at: [email protected]