By William Davidson and Helen Nyambura-Mwaura | for Bloomberg,

The government declared a six-month state of emergency Sunday to deal with the violence accompanying protests by ethnic Oromo and Amhara communities that began 11 months ago over dispossession of their land, political marginalization and state repression. The security forces have killed more than 700 people during the demonstrations, according to the Association for Human Rights in Ethiopia. The government says the attacks are being orchestrated by “foreign elements.”

Last year, investors had been touting Ethiopia as a hot new investment destination, lauding the way the government has ramped up infrastructure spending and embraced foreign capital to propel economic growth at the fastest pace on the continent. That appeal is losing its luster as the protests present the biggest challenge to Ethiopia’s ruling coalition since it gained power by force a quarter of a century ago.

“Foreign investors are viewed as parties to the regime’s development agenda and part of the wider international community’s tacit support for Ethiopia in spite of human rights transgressions,” Mark Bohlund, an economist with Bloomberg Intelligence in London, said by e-mail.

“The attacks are likely to have a severe impact on foreign direct investment in the affected areas in the short term and prompt investors to suspend operations indefinitely until security has been restored.”

Dutch-owned Africa Juice BV was set alight last week by a crowd of hundreds in Oromia, the country’s most populous region, which has experienced fatal unrest since November. Another Dutch-owned business, Bishangari Lodge, was burned on Oct. 5. Trucks belonging to Saudi billionaire Mohamed al-Amoudi’s Derba Cement and those of Dangote Cement Plc were damaged as demonstrators blocked roads and stoned vehicles.

Opponents of the government argue that Ethiopia’s economic gains haven’t been matched by increased political freedoms since the ruling party cracked down on the opposition in 2005, after losses in that year’s elections. Critics of the government’s human-rights record, including Amnesty International, cite the strict limits the state has imposed on independent media and its “pervasive violations” of civil political rights.

“The issues that need to be resolved are big, and investors will be wary as to whether the current government will be able to address them,” Jared Jeffrey, a political analyst at NKC Africa Economics, said by e-mail. “The longer it takes for the necessary reforms to be made, the more fragile the state will become and the higher the risk to investors.”

The latest burst of Oromo protests was triggered after about 200 people drowned or were crushed to death in ditches on Oct. 2 when regional authorities forcefully dispersed a protest by a large crowd at an annual cultural festival in Bishoftu, according to AHRE.

Ethiopian Communications Minister Getachew Reda said on Monday that Oromo militants received support from Egypt, without directly accusing the authorities in Cairo of backing the unrest. Egyptian Foreign Ministry spokesman Ahmed Abu Zeid said in an e-mailed statement that his country has “absolute respect for Ethiopia’s sovereignty” and that the two nations were holding “high-level communications.”

Jawar Mohammed, an influential Oromo activist based in the U.S., said businesses that have displaced Oromo or have links to the ruling coalition are being targeted.

“Companies are not attacked on the basis of being foreign or domestic,” he said in an e-mail. “It’s their affiliation with the regime.”

Africa Juice, which is about 200 kilometers (124 miles) southeast of the capital, Addis Ababa, employs more than 2,000 people to process passion fruit for export and produce fruit and vegetables for the domestic market, Chief Executive Officer Harry Van Neer said. The Hague-based company, operating on 1,600 hectares (3,954 acres) after buying the privatized state farms in 2009, has yet to make a decision about its future.

“Once we know details and the situation then we will need to see,” he said. “Two of the three farms suffered extensive damage.”

Bishangari was first attacked on Oct. 3 and protected by elders from the local community, who the company had provided assistance to, said Omar Bagersh, one of the owners. Hundreds of protesters returned over the next two days to completely destroy the popular lodge.

A U.S. citizen died on Oct. 4 on the outskirts of Addis Ababa when protesters threw a rock, according to the U.S. Embassy in Ethiopia.

Citing delays in infrastructure provision and a tax dispute, Israel Chemicals Ltd. announced last week it’s exiting a potash project that had promised to be one of country’s largest mining operations. The government is reassuring investors that it will restore order, said Fitsum Arega, head of the country’s investment commission.

“They are not happy with the situation but they are confident and taking our word that things will be normalized soon,” he said.

Jiangsu Sunshine Group, a Chinese textiles company, demonstrated that confidence by signing a “final agreement” to invest $500 million over four years at a factory in an industrial park in Adama city in Oromia region, Fitsum said.

A Chinese-funded railway going through Adama that connects Addis Ababa with its main port in neighboring Djibouti was opened on Oct. 5, while the Gibe III dam, Africa’s biggest hydropower plant, and also backed by China, began generating electricity a year ago. 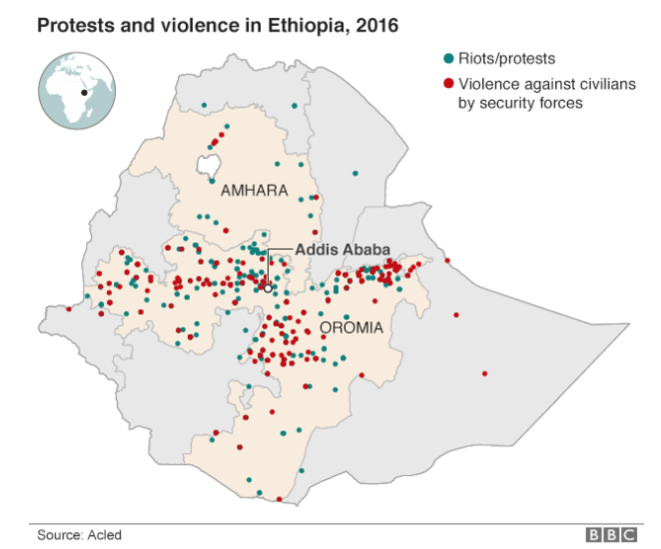