Internet Freedom in Ethiopia the Fourth Worst in the World

According to a new index released by Freedom House, Ethiopia’s internet is the least free in the world and the worst in Africa, in terms of access to the internet, censorship, and freedom of information.

By Lily Kuo | for Quartz Africa,

Ethiopia’s internet is among the least free in the world. According to a new index released by the nonprofit Freedom House, Ethiopia ranked ahead of only Iran, Syria, and China, out of 65 countries in terms of access to the internet, censorship, and freedom of information. It ranked the worst of any country in Africa.

Anti-government protests have gripped the country over the last year, gaining extra global attention when Ethiopian marathoner Feyisa Lilesa held his hands up, crossed at the wrist– an anti-government gesture used by protesters– at the Olympics. In response, Ethiopian authorities have intermittently shut down mobile phone and internet connections. They have also blocked social media like Facebook, WhatsApp, and Twitter.

Last month, a six-month state of emergency was declared, making it illegal to post or access information about the protests on social media as well as communicate with “outside forces.” Social media is also used to implicate dissidents and critics. Charges against protesters and opposition leaders often rely on evidence taken from social media, according to Freedom House.

Ethiopia’s heavy-handed approach to the internet goes further back than this last year. The country has passed counter-terrorism laws over the last five years that make it easier to pressure journalists and bloggers. The blogger Zelalem Workagenehu was sentenced to five years in prison this spring for running a course on digital security that authorities said was a cover for terrorist activities. Authorities have blocked news sites reporting on topics aside from the protests, like a severe drought that has left 18 million people in need of food and water supplies.

The situation is likely to continue. Government-owned EthioTelecom has a monopoly on internet access. Only 12% of the population has internet access and few people can afford it, given mobile access costs $85 a month compared to $30 a month in neighboring countries like Uganda or Kenya. Telecommunication infrastructure in rural areas, where most of Ethiopia’s population lives, is almost entirely absent.

Nor has the government opened the sector to competition. Chinese telecom firms ZTE and Huawei have been contracted to upgrade broadband and other networks in the country. But critics worry that Chinese investment is only helping EthioTelecom maintain its hold on the sector and continue censoring and surveilling citizens.

One bright spot is the growing network of bloggers and journalists in the Ethiopian diaspora who have been using their contacts within the country provide coverage of the country. 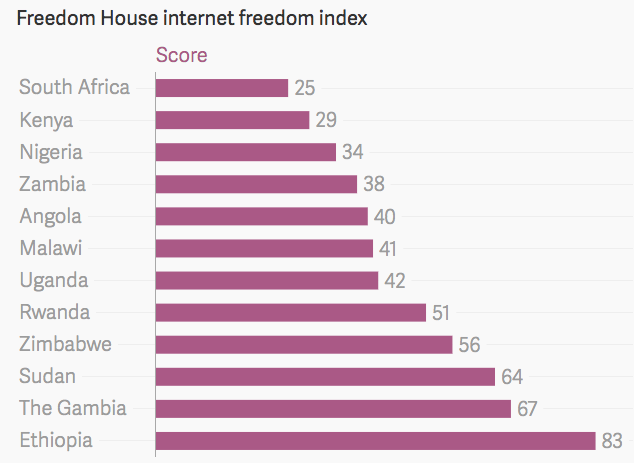