Based on publicly available data from the United States Department of Agriculture, Lake Turkana’s water levels have dropped by approximately 1.5 meters since January 2015, and further reduction is likely without urgent efforts to mitigate the impact of Ethiopia’s actions.

Human Rights Watch research based on satellite imagery shows that the drop is already affecting the shoreline of the lake, which has receded as much as 1.7 kilometers in Ferguson Gulf since November 2014. The Gulf is a critical fish breeding area, and a key fishing ground for the indigenous Turkana people.

“The predicted drop in the lake levels will seriously affect food supplies in the Omo Valley and Lake Turkana, which provide the livelihoods for half a million people in both Kenya and Ethiopia,” said Felix Horne, senior Africa researcher at Human Rights Watch. “The Ethiopian government’s moves to develop its resources should not endanger the survival of indigenous people living downstream.”

In 2015, the reservoir behind the new Gibe III dam in Ethiopia began filling. Water that previously flowed unimpeded into Lake Turkana, replenishing seasonal drops in lake levels, has since been held behind the Gibe III dam. In 2015 the annual July-November flood from the Omo River into Lake Turkana did not occur, resulting in a drop of water levels of 1.3 meters from November 2014. The very limited artificial release of water from Gibe III in 2016 was not enough to replenish water levels in Lake Turkana. As of January 30, 2017, lake levels were approximately 1.5 meters lower than they were two years earlier according to the data.

People living in fishing communities along Lake Turkana who spoke to Human Rights Watch in August 2016, were generally aware of the risks posed by Gibe III but largely uninformed about the plantations and the devastating impact they could have on their livelihoods. When Human Rights Watch visited communities around Ferguson Gulf on the western lake shores that month, local residents had noticed changes from previous years in the lake levels.

People who depend on fishing for their livelihood said that their daily catch has been reduced. One 50-year-old woman living near Lake Turkana told Human Rights Watch in August 2016: “It has been difficult these days…the main issue has been hunger. There is reduced water in the lake.” While multiple factors contribute to the decline, including overfishing and unsustainable fishing practices, a further drop in lake levels will most likely reduce catches even further.

The Kenyan government has done little to address the impact from Ethiopia’s Omo Valley development, or to press Ethiopia to take steps to mitigate the damage and to consult with and inform affected communities about the impact of the project. The governments of Kenya and Ethiopia should urgently work with these communities to ensure upstream industrial works does not devastate their livelihoods, Human Rights Watch said.

In addition to the industrial developments in lower Omo, climate change is exacerbating the already significant problems the Turkana people face in getting sufficient food and water, and maintaining their health and security.

“The Ethiopian government has shown scant regard for the lives and livelihoods of already marginalized communities who are reliant on the Omo River and Lake Turkana for their livelihoods,” Horne said. “In its rush to develop its resources it has not developed strategies to minimize the impact on those living downstream.”

Ethiopia’s Gibe III dam, which opened on December 17, 2016, is a key component of a massive industrial project in the lower Omo Valley that includes a cascade of water-intensive mega dams, and sugar and cotton plantations. The sugar plantations have been under development in the Omo Valley since 2011. Based on Human Rights Watch estimates derived from satellite imagery, approximately 19,500 hectares of land has been cleared on the east bank of the river for sugar plantation development. An additional 10,500 hectares has been prepared for irrigation on the west bank. The sugar plantations are planned to be 100,000 hectares. According to the Ethiopian Sugar Corporation, the first of the four sugar processing factories should be ready to begin production in early 2017.

In Ethiopia, livelihoods of those living in the Omo Valley depend on cattle grazing and planting crops in the rich alluvial soil along the banks of the Omo River. This alluvial soil is replenished by the annual flood, which deposits water and nutrient rich sediment along the banks. A lack of floods in 2015 and an inadequate artificial flood in 2016 are making it more difficult to grow food along the Omo River.

Some communities have also reported restricted access to the Omo River and food shortages in 2016. Furthermore, the plantations necessitate clearing of land used by agro-pastoral indigenous groups including the Bodi and the Mursi. The Bodi have been the most heavily affected, with a significant area of their land cleared.

“The projections of the water drawdown on Lake Turkana, routinely rubbished by Ethiopia’s government, are coming true and lake levels have started dropping,” Horne said. “This should serve as a warning about what could happen if the Ethiopian government continues to ignore the needs of downstream communities in its rush to develop its resources.” 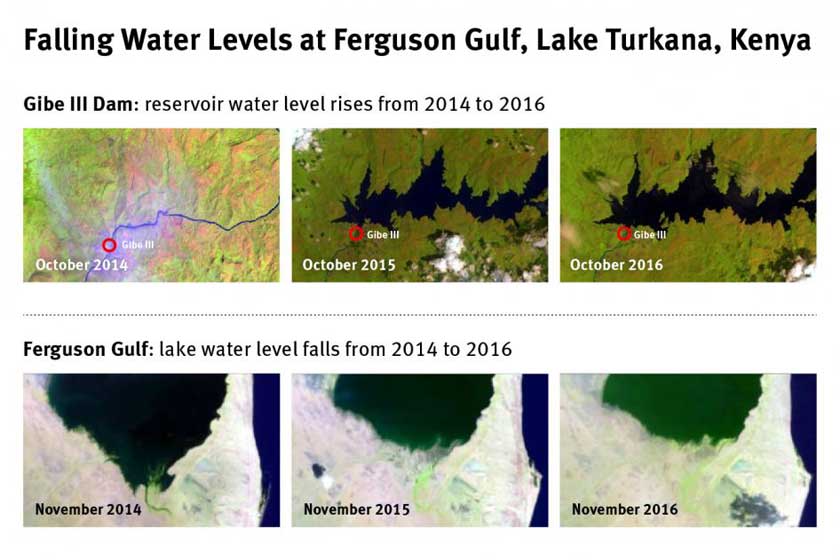 Pastoralism, the Turkana peoples’ main livelihood along with fishing, is at risk due to increasing temperatures and shifting rainfall patterns, resulting in shrinking grazing land. According to Kenya’s Drought Management Authority data from January 2017, the 2016 October-December rains were the shortest in recent years in Kenya, leaving 2.7 million people depending on relief assistance. Turkana was one of the counties most affected.

Traditionally, in times of drought, many pastoralist communities dig in dry riverbeds for water and turn to the lake for fishing. However, Turkana county officials told Human Rights Watch that the combination of threats to the lake and climate change will make it very difficult for the Turkana people.

The Kenyan Climate Change Law passed in May 2016, if rigorously carried out, could improve coordination and governance of national and local policies related to climate change, and ensure that the rights of indigenous peoples are respected. The law mandates the participation of a representative from a “marginalized community” who has “experience in matters relating to indigenous knowledge” as a member of the new National Climate Change Council. Yet, the post has not been filled.

In 2012, independent hydrologists predicted that once Gibe III was operational, water levels in Lake Turkana in neighboring Kenya, which gets 90 percent of its water from the Omo River, would drop by up to two meters. They have also predicted a potentially devastating drop of up to 20 meters should Ethiopia’s Omo Valley development plans be fully carried out as planned, forecasting that the lake could recede into two small pools.

Further compounding the problem, in March 2016 the Ethiopian government announced plans for the development of a new US$1.6 billion dam, 2,200-megawatt Gibe IV, which will produce more power than any other dam in Africa outside of Ethiopia. As with Gibe III, an Italian company has been awarded the contract for Gibe IV and applied for financing for the dam through Servizi Assicurativi del Commercio Estero (SACE), the Italian export credit agency. There are plans for a fifth dam on the Omo River.

Irrigated sugar and cotton plantations in the hot and dry Omo Valley will use significant amounts of water that previously would have flowed into Lake Turkana. While the Ethiopian government claims an Environmental Impact Assessment (EIA) was carried out for the state-owned sugar project, an Ethiopian law requires EIAs be “accessible to the public.” Human Rights Watch has not spoken with anyone who has seen such an assessment. Such an assessment should outline strategies to mitigate the impact of water use on downstream communities and be made public. There is little evidence that the Ethiopian government obtained the free, prior, and informed consent of indigenous people in the Omo Valley for any of these developments, a requirement under international law. The non-governmental organization, Survival International, filed a complaint on behalf of impacted Omo communities before the African Commission on Human and Peoples’ Rights’ (ACHPR) in 2012, arguing that the free, prior. and informed consent of the indigenous peoples of the Omo Valley was not given before construction began on Gibe III and the sugar plantations. According to the ACHPR Activity Report from January 2013, ACHPR requested the government of Ethiopia “to adopt Provisional Measures to prevent irreparable harm being caused to the victim of alleged human rights violations; the State has not respected that Order”. A final decision has yet to be made on the complaint.