What is Really Happening in Ethiopia?

News of the resignation of Ethiopia’s Prime Minister Hailemariam Desalegn could be seen as unusual in the way power has been changing hands in the past, but not an unexpected move at all.

This is considering the fact that the regime is under intense pressure from within and without. After years of ruthless rule by the TPLF, the people, who have so far been seen by the regime as its subjects, have said enough!

The people had enough of a single ethnic group, the Tigray, choking their daily lives. The people said enough to a ruthless rule by unelected minority. This is not to mention the thousands who have lost their lives at the hands of regime’s security forces and the hundreds of thousands displaced as result of communal clashes instigated by unruly army commanders and generals running contraband trade in Eastern Ethiopia.

This is not to mention the obvious fact that the people have finally said it was high time that the regime release hundreds of prisoners of conscience thrown to jail on bogus charges of terrorism and religious radicalism. The people have said those prisoners of conscience whom the regime labeled “terrorists” break the gates of the prison and assume the task of leading the politics of the country.

The Tigray People’s Liberation Front (TPLF), the clique that is running the country with an iron fist, has lost its direction, or lack thereof, after the death of its “strong man” Meles Zenawi.”

Infighting and insatiable hunger for power and money among the top echelons within the ethnocentric clique have put the regime in the deep coulee, so deep and steep, it may never come out.

To the outside observer, especially to the ferenjis or the West, or whatever you call them, Desalegn’s move could be seen as a modern-day solution by a leader who takes responsibility for the ills of a nation and resigns to pave the way for salvaging a country. But that is not what is going on under the facade of Ethiopia’s ruling coalition and pseudo federalist system of government, or of sorts.

The handful of people within the TPLF, who have the power to call the shots, might have told Hailemariam Desalegn, a non-Tigrayan and placeholder Prime Minister (some call him puppet PM) that it was a genius idea that if he resigns, it would be a “great move” by the “government” to give the impression that they are determined to change the status quo. It would give the supposed impression of change or veneer of change to the West and to their donors, who are equally troubled by what’s going on in the country.

Enter the military, led by the Chief of Staff, Samora Yunis, who has reportedly refused to retire as per recent recommendations by the faction of TPLF which is gaining the upper hand in the internal power struggle.

The resignation of a Prime Minister is a huge deal in any country. It creates a power vacuum that needs to be filled orderly or otherwise. In Ethiopia’s case, could forcing the Prime Minister out be an excuse for the military wing of the TPLF, in the name of filling the vacuum and keep order, to step in? Wouldn’t a military coup by TPLF generals be necessary step (on their part) to further the life of the ethnic based gang of thugs? – and by extension the suffering of the masses?

As I type this note, Tigrayan operatives masquerading as journalists and websites with allegiance to anything Tigray have given indications that a declaration of a State of Emergency is in the making. 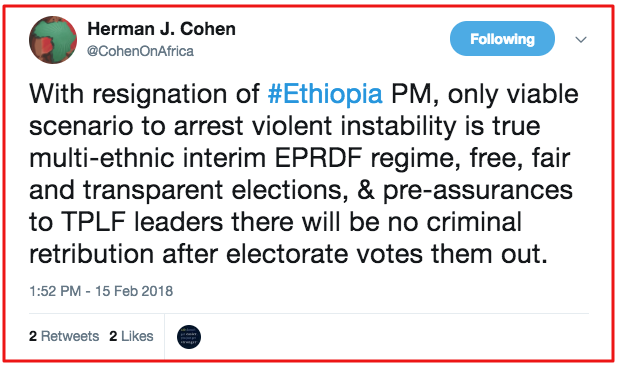 Given past experiences, whenever TPLF is about to come up with a certain declaration, it first leaked it to the so-called journalists and their websites. A state of emergency means that the military would take control of the country and the people would be banned from exercising any form expression.

If the last state of emergency is any indication, the military was allowed to shoot first and ask questions later and the public was told to just shut up!

Whatever the current modus operandi of the “saviors” of the TPLF, their objective is only one and one: to affirm that TPLF clings to power as long as it could or indefinitely as they had vowed time and again.

And for now, it looks like a military coup, or some form of takeover of power by the military under a different alias is what the big boys of TPLF might have in mind.