Ethiopia and Eritrea have agreed to restore relations following a landmark meeting between the two countries’ leaders in Asmara, aimed at ending decades of diplomatic and armed strife.

The announcement on Sunday capped weeks of whirlwind change, driven by new Ethiopian Prime Minister Abiy Ahmed, who was welcomed for face-to-face talks in the Eritrean capital by President Isaias Afwerki.

“We agreed that the airlines will start operating, the ports will be accessible, people can move between the two countries and the embassies will be opened,” Abiy said at an official dinner.

“We will demolish the wall and, with love, build a bridge between the two countries,” Abiy continued.

The sudden rapprochement will spell an end to a years-long cold war that has hurt both countries.

The Horn of Africa nations has remained at loggerheads since Ethiopia rejected a United Nations ruling and refused to cede to Eritrea land along the countries’ border following a 1998-2000 war that killed 80,000 people.

There was no sign of that animosity on Sunday.

Abiy stepped from an Ethiopian Airlines plane at the airport in Asmara to be greeted by Isaias. The two men embraced before they strode off along a red carpet.

Out in the streets, chanting crowds cheered on the leaders’ convoy, waving the twinned flags of Ethiopia and Eritrea and spreading flowers and popcorn in a typical Eritrean tradition.

With Abiy’s comments later in the day, the meeting appeared to have achieved its touted aim of seizing “a spectacular opportunity to decidedly moving forward peace for the good of our people,” as Abiy’s chief of staff Fitsum Arega put it earlier.

Eritrea’s information minister, Yemane Gebremeskel, later tweeted a photo of the two leaders huddled in a discussion, promising the meeting would, “set the tone for rapid, positive changes on the basis of respect of sovereignty and territorial integrity.” 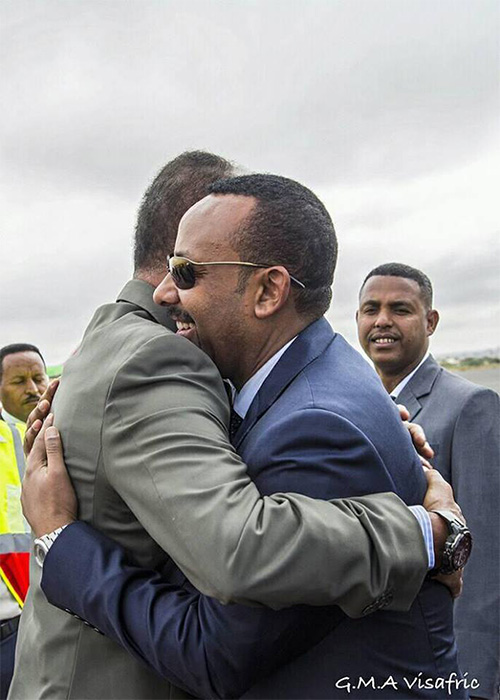 The re-establishment of diplomatic and trade ties after years of bitter separation could mean big benefits for both nations, and the wider Horn of Africa region, plagued by conflict and poverty.

The East African countries fought a bloody border war that erupted in 1998. The two-year war left more than 80,000 people dead and hundreds of thousands displaced.

A UN-backed peace agreement in 2000 awarded the disputed border territories to Eritrea, but the deal was never implemented.

The countries have skirmished since then in one of Africa’s longest-running conflicts.

In May this year, Ethiopia announced that it would implement the December 2000 Algiers agreement, in what was the biggest and most surprising reform yet announced by Abiy.

There are a number of disputed territories along the border and territories will move in both directions to Eritrea and Ethiopia, Matt Bryden, chairman of the Sahan think tank, told Al Jazeera.

“There are going to be communities that are likely to resist finding themselves transferred to another national jurisdiction or divided by the new border. So the implementation is something that is going to have to be handled very carefully.”

Abiy, 42, was sworn in in early April after being elected by Ethiopia’s parliament as the country’s new prime minister. He was nominated for the post by the ruling Ethiopian People’s Revolutionary Democratic Front coalition, which controls all the seats in the Ethiopian parliament and has been in power since 1991.

Since then, Abiy has quickly introduced a wave of reforms, releasing journalists and opposition figures from prison, opening up the state-run economy and unblocking hundreds of websites after years of anti-government protests demanding more freedoms. […]