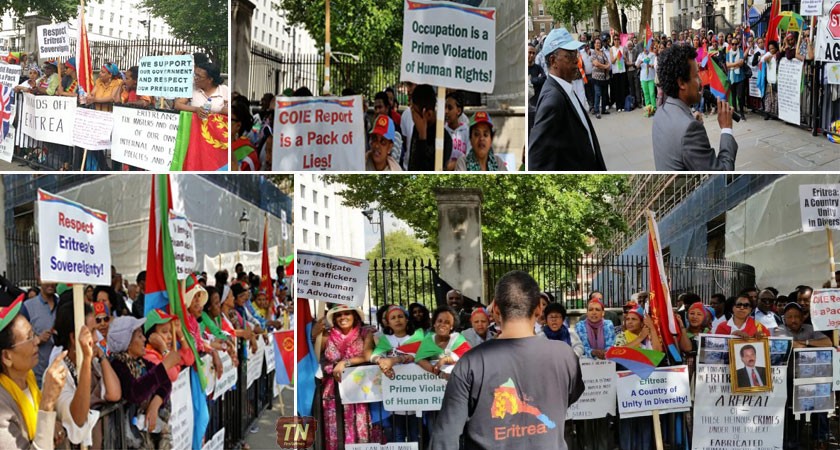 It was in continuation of the once monthly event which henceforth will be held on the first Friday of every coming month for the foreseeable future. The next mass demonstration will thus be on Friday 4th September. This event was part of and in continuation of the historic non-stop 24/7 demonstration that started on the 26th of June 2016 by a single patriotic Eritrean, and has been on since then and is now on its 45th day.

Listening to the boom of the peoples’ slogans, through loud speakers reverberating over the majestic Whitehall buildings and main streets, popular with members of the British Parliament, and attracting the passers-by London public, and international tourists, was very impressive and gratifying. Our usual slogans calling for the immediate implementation of the Final and Binding decision of the EEBC, and the immediate lifting of the unfair, unjust and illegal sanctions, and condemning the fabricated COIE report were there in tens of placards. There were in addition catchy short slogans that read, Peace for Eritrea, Justice for Eritrea, Hands off Eritrea, Leave Eritrean alone, Eritrea deserves Peace, Eritrea expects Justice to mention a few. We also had compatriots, women and men, who came from Birmingham and other cities to participate in the London event. One compatriot read a beautiful poem he wrote himself, to a warm applaud from the audience.

The sloganeering interspersed with speeches and popular songs, to maximum impact and effect, continued non-stop, with impressive clockwork co-ordination. A designated group of six, then proceeded to the gates of Downing Street, at the stipulated time of 1500 hours to deliver a letter to the Prime Minister containing our three main demands, a petition signed by over 2,000 Eritreans, the British public and tourists that visited our camp and sympathised with our demands. We also included a copy of Professor Asmerom Legesse’s twelve page long “Critique of the Human Rights Commission on Eritrea“, prepared for a meeting at the House of Lords, UK on 18th June 2015, that never took place, because of Baroness Kinnock of Holyhead, the wife of the former Labour Party leader Neil Kinnock’s conspiracy.

Mrs Kinnock corruptly abused her position as a former MEP, Member of European Parliament, and her influence and privilege as a wife of a past leader of the Labour Party. She put extreme pressure, first on a Baroness, and later on a Lord, to withdraw their offer to host the planned meeting at the Lords twice. If this had happened in what they call the ‘third world’, the Baroness and her hypocrite likes as proponents of their so called “democracy and democratic values”, would have been quick to an ashamedly call it, Human Rights violation, denial of freedom of expression / association, abuse of power, nepotism, etc. The professor and the two Canadians leaving their job had travelled all the way from their respective countries, solely for this purpose. Although the Canadians understandably left in frustration, we arranged an impromptu meeting of the professor with our community members at a pub next door to the Resource for London, and we heard him speak.

That’s why we included our Professor’s critique, to the PM’s list of enclosed documents. We felt he ought to read what was denied to him too, by Baroness Kinnock. At 1515, we handed the pack to a polite policeman at the door of number 10 Downing Street, with the promise that our message will be safely delivered, and we should expect a reply soon. A copy of the entire letter to PM David Cameron, is attached as a separate document. Our main demands were:

At 1600 hours, we similarly delivered copies of all the three documents delivered to the PM, to the Foreign and Commonwealth Office. We were very warmly received by Kevin Steers, Desk Officer for Eritrea, in the East Africa Team, Africa Directorate, and Margaret Mills, Assistant Desk Officer UN Team of the Human Rights Department. We raised our three demands with both, and exhaustively discussed how we have been continuously victimised by the UN, and its Security Council, for the last close to 70 years. The USA in order to satisfy its own hegemonic interests in the Red Sea, and its client state Ethiopia’s insatiable expansionist dreams in the region have under successive leaders from the last king to the present minority government of Tigray bandits, have been working hand in glove with the Americans.

Unlike our previous experience with Whitehall officials, however, this meeting and the ensuing discussions that followed, were more fruitful, in that both parties agreed that the main cause for all the problems and instability in the Horn of Africa was the non-implementation of the EEBC decisions of 2002. We were in total agreement this has had a domino effect on many other issues such as the prolongation of the National Military Service, which in turn contributed in part to the influx of migration, human trafficking, etc., not only from Eritrea, but the Entire Horn.

The unjust and unlawful sanctions 1907/2009 and 2023/2011 on Eritrea, and its detrimental effect on our economy, and the way this affects our defence capacity and capability taking into account that sovereign Eritrean territory is still under occupation now for over 13 years was also discussed. The guarantors of the Algiers Agreement on the other hand, at the behest of the USA, are doing nothing to enforce the Final and Binding decision, despite the fact that there is a clause in the agreement on what should be done to the un-abiding party. We also were in agreement that the so called Commission of Inquiry (COI) on Eritrea’s fabricated report was totally flawed, in its methodology, sample size, and completely biased sampling techniques as it was mainly based on testimonies gathered from asylum seekers, mainly living in Ethiopia and Djibouti, two arch enemies of Eritrea. Why didn’t they go to Sudan, Kenya, etc. It is because both Ethiopia and Djibouti are under the heavy influence if not total servitude of the USA, the arch-opponent of the inalienable right of the Eritrean people to self-determination at the UN in 1950, and now the main force emboldening and urging Ethiopia to ignore the Final and Binding 2002 decision.

We also raised the despicable role Baroness Kinnock played at denying respectable professional guests the right to be heard at the Lords. The corrupt tactics she used to intimidate her peers into submission not to host the fully and widely publicized meeting, where creating and building engagement with the Eritrean government was to have been the aim. Our concern on this matter was shared by the officers, and were offered some useful information on how we can exercise our God given Rights as lawful, hardworking, tax paying UK citizens, and equally to ask for redress whenever these rights  are violated by people of the likes of Mrs Kinnock, exploiting their past position in the labour party and European Parliament, or their current in the House of Lords.

In summary, we had a very successful demonstration, and despite what Baroness Kinnock tried, to gag us from being heard, we had quite encouraging signals from Whitehall. Mrs Kinnock, as many of us may remember, was a staunch supporter of the Eritrean cause. She visited the liberated areas under the control of EPLF in 1988, and even wrote a book on her return.

We are not saying people shouldn’t make a U turn as the honourable lady has done. People can even somersault if they wish to, but this should be based on facts, after visiting the country in question first, and accumulating the evidence, before reaching any conclusions. The Baroness and her cohorts, has rushed into conclusions based on information supplied to them by sworn enemies of the state. From the so called “Human Rights campaigners” who many of us believe have a hand in human trafficking, and are under the pay roll of our two main detractors, the USA and Ethiopia. We are sure we will eventually prove to these individuals that they were wrong, and that time is not going to be very long.

We would like to inform our people wherever they are, that the sit-in FenQ’l demonstration is still going strong and is on its 45th day today August 12, 2015. We will continue to hold the scheduled monthly mass demonstration on the first Friday of every month at our front line at Whitehall. The next and 3rd mass demonstration, as we mentioned earlier, will be on the 4th of September, 2015.

We would also, in conclusion, like to respectfully call on our compatriots all around the world, to embark on a similar campaign. Together we can do and achieve a lot. We have done it before during the 30 years long bitter and protracted Liberation Struggle when we stood alone against two mighty super powers backed Ethiopia, a country 25 times our size, population wise. We will do it again.

The truth always prevails!
Eritrea will definitely prevail!
The truth is on our side!
Awet N’Hafash !