An Eritrean’s Perspective of the Peace Process

The resolute and speedy events that have been unfolding between Eritrea and Ethiopia over the past couple of months are still gaining momentum, even as we speak today. The Ethiopian Prime Minister has already been to Asmara to sign a deal with his counterpart Eritrean President effectively ending the state of war between the two countries.

During that visit they also agreed to implement the border ruling,  open diplomatic relations,  communication and access to ports.

Last week, the Eritrean President was in Ethiopia to further consolidate the peace deal signed in Asmara and maybe even elaborate a more detailed implementation framework in which we would be able to see some clear and critical milestones.

This visit has no doubt created an opportunity for the people of Ethiopia, in turn, to express their desire for peace and stability in the same way that Eritreans were able to show during the Ethiopian Prime Minister’s visit to Asmara.

The three main factors that make this latest development  legitimate and ensure its developing progress are:

1 The peace initiative and its agreement was achieved bilaterally and without any third party intervention. There have been attempts by some self-styled international political analysts, who seem to unilaterally claim to be authority of affairs of the region, insisting that there were third-party players who influenced the current outcome.

This is, however, not correct and no third party intervened, brokered or mediated. Therefore, this is seen by both leaders and leaders of countries in the region as an excellent example of finding an African solution to an African conflict.

Both leaders have it in their best interest to maintain this narrative of ownership as it will be an important element in legitimizing the decisions they will make going forward in normalizing the relations of the two counties and the position they’ll carve out for themselves in the regional power dynamics.

This will also help chart and determine the type of partnership that each side will forge with other players in the process of implementation of the peace agreement.

2 The basis of this rapprochement is the legally binding Algiers Peace Agreement of 2000 and the Final and Binding Ruling by the Hague based Tribunal of the International Court (Eritrea- Ethiopia Boundary Commission).

This platform provided the clarity of what needed to be done in order to move forward to normalize relations between the two countries. This situation also clearly put the burden on Ethiopia in which a hard decision needed to be made for a complete reversal of previous policy that did not accept the ruling and the insistence to renegotiate the terms of the ruling with an aim to change the outcome.

Therefore, the Ethiopian government under the leadership of the new Prime Minister made a dramatic move to change its policy and accepted those two documents “unconditionally” and committed to their “full implementation”.

On the other hand, the Eritrean government also acknowledged the shift in policy and agreed that this was now in line with the legally binding documents and it’s own call of 16 years for Ethiopia to accept and end its occupation of Eritrean sovereign territory and remove its occupational forces. Given that the fundamentals are now aligned and have paved the legal and legitimate path for making peace and normalizing relations, it will be difficult to backtrack on the new policy in any way, by any side.

3 The expressed views and involvement of the people of both countries are clear statements that both leaders and governments can’t renegade on and abandon this new peace deal to end the state of war and restore normal relations.

The citizens of Eritrea that lined up the streets of Asmara to welcome the Ethiopian Prime Minister did so out of will and with little organization. This confirmed the genuine desire of the people to support any kind of peace and by extension also became a binding statement to the government.

The situation in Ethiopia is slightly different because the new Prime Minister had been building a momentum of mass support in his country since he assumed power. He moved around his country trying to pacify the highly tensed ethnic situation among the various communities. His primary task was to bring his country from the brink of genocide and self-destruction. His efforts had already started to yield legitimacy from his people long before his trip to Asmara to make peace. His achievements in Asmara further consolidated his legitimacy in his country and earned the expressed support of Ethiopians to the peace deal with Eritrea.

Looking at the wide range of discussions taking place on social media, it is obvious that the majority of Ethiopians support their new and charismatic Prime Minister and the revised policy to unconditionally accept and implement the Algiers Peace Agreement and the border ruling. The limited resistance is coming from a group within the ruling coalition, but even that is already showing signs of a split from within making that resistance short lived.

The support given to the Eritrean President and the government by the Eritrean population also seems to be overwhelming and widespread. This is evidenced by the upbeat mood inside the country and among the diaspora. The social media is awash with positive messages and exchanges.

Despite this overwhelming support, there are still some disapproving voices from the same individuals known to be critical towards government even though Eritreans gave a clear message that they want peace, development, and opportunities and they seem to be heard very much by the leadership of the country.

Indeed, two decades of opportunities, growth, and peaceful coexistence had been denied to the country due to the “no-war, no-peace” status with Ethiopia which was further complicated by a strategy of ‘regime change’ to ensure complete submissiveness by the country.

This difficult situation was exasperated by an accusation against Eritrea for engaging in a proxy war in Somalia. This accusation was made collaboratively by US, Ethiopia, and Kenya with the aim of isolating Eritrea from playing a role in the peace and security building of its region. This accusation was also used by the US to back a UNSC sanctions against Eritrea. The regional intergovernmental body of the Horn, IGAD, was used as a vehicle to slap Eritrea with the infamous UN sanctions. It’s therefore not a surprise that Ethiopia has been chairing the IGAD for the past 10 years without any rotation among its member states. 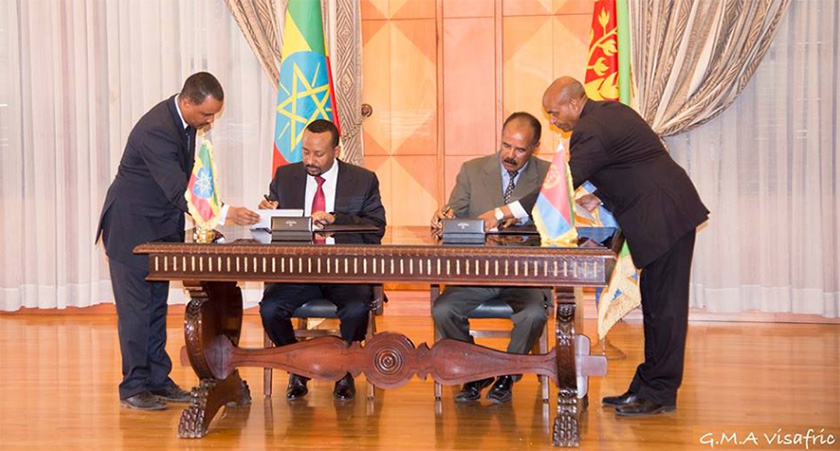 Some of the critics of the Eritrean government are trying to create a picture in which the current developments for peace between Eritrea and Ethiopia could be the beginning of the end for President Afwerki and the government. Some are calling for his resignation or retirement. Much of the literature they’re advancing are those same ones used as part of the ‘regime change’ agenda by the former Ethiopian and US leaderships – human rights violations, crimes against humanity/slavery through the national service, detention without trial, migration, non-operation of the constitution, lack of elections, etc.

These accusations were also packaged into a report and presented to the UN Human Rights Council by a commission of inquiry on Eritrea, despite ignoring a petition by over half a million Eritreans opposing its content.

The report failed to have the desired effects so far in as much as the consensus is concerned by member states. This was mainly because of the politicised nature of the report and the fact that other mechanisms of human rights monitoring in Eritrea were in place. Sadly, one of the report recommendations also included pressing charges at the ICC on crimes against humanity.

In the absence of a legitimate and properly organized and functional opposition in Eritrea, it appears that much of what’s being heard is from a few individuals, therefore, can’t withstand the overwhelming support the President is getting at this point. This support will be the legitimacy that he will need to move forward with normalization of relations with Ethiopia and beyond as well as initiate internal reform needed to make his government fit for purpose in the years ahead.

There are a number of reform items that the President has already listed, which are expected to open political and economic spaces as well as improved quality public services.

It’s also my view that much of those reform items will meet many halfway to join forces to contribute towards a much vibrant economy and to strengthen national capacity to play a critical role in the region.