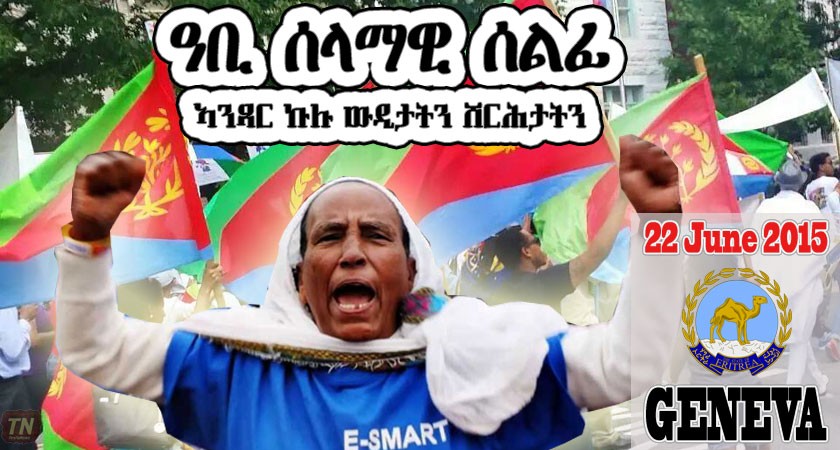 ERITREANS in Europe, outraged by the recent assault on their people and country by the so-called “Commission of Inquiry” of the UN Human Rights Council, and standing for genuine human rights, are holding a protest rally in Geneva, Switzerland on Monday 22 June, 2015.

The UN Commission of Inquiry for Human Rights in Eritrea, chaired by Mr. Mike Smith (Australia), and consisting of two other members, Mr. Victor Dankwa (Ghana), and Ms. Sheila B. Keetharuth (Mauritius), has never been accepted by Eritrea from the beginning because some of its members had previously been advocating openly for “regime change” in Eritrea.

This compromised and biased Commission then presented in a press conference recently a lengthy 500-page report leveling baseless and false allegations against Eritrea. The Commission said, “The government of Eritrea is responsible for systematic and widespread human rights violations, which have created a climate of fear in which dissent is stifled … Some of these violations may amount to crimes against humanity.“

Without any sense of shame at the press conference, the members of the Commission explained tongue-in-cheek that all these accusations were formulated without ever having visited Eritrea, a country that, therefore, they do not know and have never seen, but reached their indictment on the basis of “… about 550 confidential interviews with Eritreans witnesses who fled their country … and 160 written submissions.“

The testimonials submitted are strictly anonymous because the members of the Commission claim that, “Many potential witnesses residing outside of Eritrea were afraid to testify, even in confidence, because they assumed they could be secretly monitored by the authorities and therefore they feared for their safety and that of their families in Eritrea.”

Outraged by these preposterous accusations, thousands of Eritreans residing in European countries are organizing a rally in Geneva on June 22 to protest against this new act of naked hostility towards Eritrea, a country that asks for nothing more than to be left alone to develop its economic recovery programs; to have its national sovereignty respected as stated in the “final and binding” verdict by the Eritrea Ethiopia Boundary Commission of 12 April 2002 in accordance with the Algiers Peace Agreement of December 2000; and the lifting of the unjust US-imposed UN sanctions of 2009 and 2011.

In this protest rally, Eritreans will clearly and openly demonstrate to the world that the allegations of the UN Commission of Inquiry for Human Rights in Eritrea are a blatant big lie, and the entire Eritrean people are united in the defense of their country, their Government and their President.