Winning this edition of the African championship was another great milestone for the Eritrean elite men’s team as it turns out to be their unprecedented record 8th consecutive victory.

Team Rwanda and Algeria are forced to settle for Silver and Bronze medals respectively.

Ever since 2010, the Eritrean national team dominates the African Continental Championship competition and yet, no other African national team has managed to upset its absolute dominance.

For the first time in the category, it was Ethiopia’s turn to grab the Gold medal through Selam Amha, Tsega Beyene, Eyeru Gebre and Eyerusalem Halil.

Eritrea and Rwanda finished second and third in this category.

Only from day one, Team Rwanda won the most number of medals: 2 Gold and 2 Silver. Eritrea followed with 2 Gold and 1 Silver. Algeria has won 1 bronze yet.

A more thrilling action is expected on Thursday when the Individual Time Trial (ITT) staged in all categories.

This year’s event has attracted a total of 167 riders, representing 22 African countries including the giants of Africa such as Eritrea, Algeria, Morocco, South Africa and Ethiopia who are expected to give the hosts Rwanda a hard time in the chase for medals. 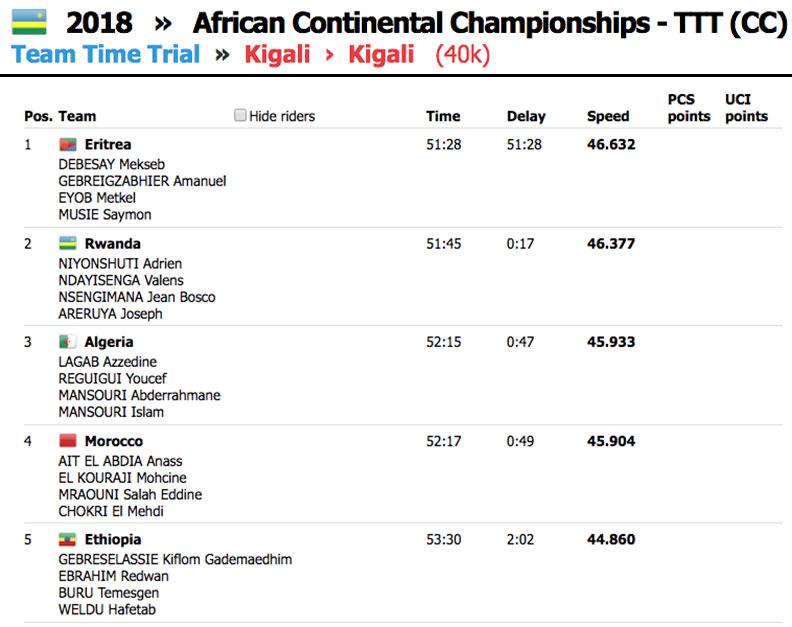