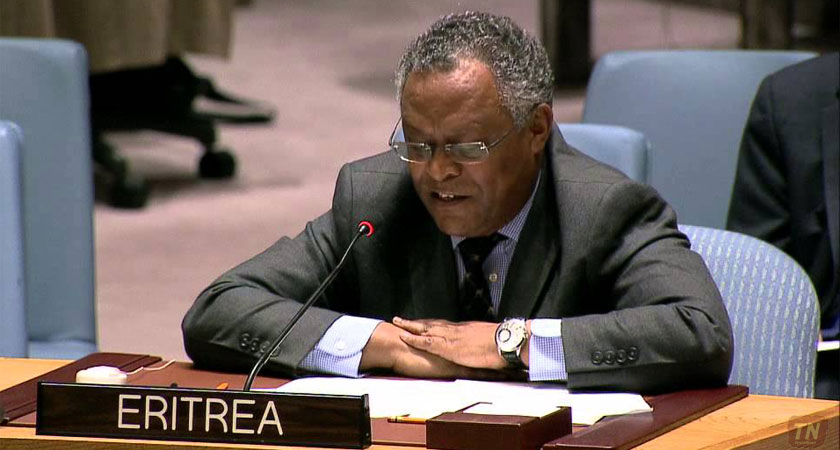 Statement by Ambassador Girma Asmerom, Permanent Representative of Eritrea to the United Nations, During the UN Security Council Open Debate on “The Respect to the Principle and Purpose of the Charter of the United Nations as key Element for the Maintennace of International Peace and Security”

Her Excellency Ms. Delcy Rodríguez, Foreign Minister of the Bolivarian Republic of Venezuela,

At the outset, I would like to thank the Presidency, Bolivarian Republic of Venezuela, for organizing this open debate, under the theme: “The Respect to the Principle and Purpose of the Charter of the United Nations as Key Element for the maintenance of International Peace and Security”, which is timely and most appropriate.

Let me also seize this opportunity to express my delegation’s appreciation to the UN Secretary-General for his remarks this morning.

This year marks the 70th Anniversary of the establishment of the United Nations to save “succeeding generations from the scourge of war” and ensuring justice and development for all nations. In these dynamic and evolving years, maintaining global peace and security was and remains one of the United Nations cardinal goals; and yet, conflicts and wars have become constant features of our lives. Many of these wars are waged in total disregard for the Charter of the United Nations and increasingly without its mandate. As a result, collective and coordinated remedial action is required by all big and small countries.

The world has changed almost beyond recognition since 1945. The global demographic, economic, political and cultural realities of the world and the states bear little resemblance to the past. And yet, the United Nations, the organization that supposedly represents the entire community of nations and the peoples of the world, remains thoroughly dominated by the few and has marginalized the overwhelming majority.

The international community has a choice to make: do we want to see the United Nations to be an effective multilateral instrument for the maintenance of international peace and security or continue to maintain its present archaic nature where the dominant and powerful countries misuse it to justify their hostile and hegemonic policies towards nations that do not dance to their tunes? If the choice is the latter, the confidence and support of the majority nations towards the United Nations will further be eroded.

Every government and nation has been calling for the revitalization and restructuring of the UN. However, two decades after the reform of the UN Security Council has formally been on the agenda of the UN and despite many extensive viable proposals, we are where we were 70 years ago.

It is vital that all small and big nations, peoples as well as political and social forces that stand for peace, independence, respect for international law, justice, equity and sustainable development to forge a common front in order to defend time-tested principles of equal sovereignty of nations, respect for territorial integrity and peaceful coexistence. The right of nations to choose their social and economic path of development, must not only be respected, but must be the main principles of the United Nations. Respect for the dignity and rights of citizens and migrants and fidelity to the Charter of the United Nations and international law should also be the guiding principles. The principles of the UN Charter must not be compromised for diplomatic and political expediency.

For the geopolitical interest of the big powers and as a victim of the cold war, six decades ago, to be precise in 1952, the Eritrean people were denied of their inalienable right to Self-Determination and independence by the United Nations. For thirty years, the Eritrean people were savagely bombed from the air and the ground, with the aim of crushing their just struggle for independence. However, through sheer determination and grass root participatory system, the Eritrean people were able to achieve their independence on May 24, 1991. Once again today, the Eritrea people are subjected to unfair and illegitimate sanctions by the Security Council on the basis of fabricated allegations which are proven to be non-existent. Moreover, the Security Council continue to neglect the illegal occupation of our sovereign territory by Ethiopia. It is done in violation of international law and several Security Council resolutions and the final and binding Delimitation and Demarcation Decisions by the Eritrea Ethiopia Boundary Commission (EEBC) which the UN is the guarantor for its implementation.

In conclusion, Eritrea endorsed the concept note as presented by the Presidency. Eritrea also strongly believe that there is no other international body better than the UN to handle regional and international issues. Yes, it has to be maintained, but it has to be reinvigorated, enhanced and reformed.