The head of Malaria Control at the Ministry of Health, Mr. Selam Mehreteab, indicated that the ministry will introduce new malaria drug, Artesunate, starting from the month of September.

The new drug, unlike the previous drugs that were provided to patients in the form of tablets, will be provided in the forms of injection, he further pointed out.

Mr. Selam also explained that with the good rainy season there is a concern that the malaria case could occur in the Southern, Northern Red Sea and Anseba regions and that the Ministry of Health taking that into consideration is undertaking the necessary preparations. The introduction of the new drug is also part of the preparations being made, he noted.

He also stressed that the malaria case occurrence is highly probable in the western lowlands and highlands during the months of July to December and in the Southern and Northern Red Sea regions during the months of October to April and called on the public to take extra measures in clearing the suspected malaria breeding sites.

Mr. Selam finally called on the public to make use of the nearby health facilities in case they feel the symptom of the disease.

Documents of the Ministry of Health indicate that with the sustainable awareness raising and educational programs on the part of the Ministry and the stakeholders the death rate due to malaria has been reduced by 90% nationwide.

#Eritrea was also awarded by GAVI (Global Alliance for Vaccine Initiative) as early as 2009 for high and sustained immunization coverage. 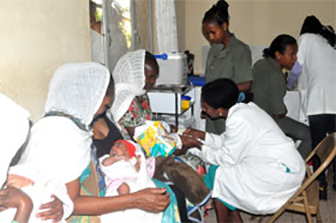 (Asmara, 17 August 2016) – In line with the efforts that have been exerted to upgrade maternal and child care, the Ministry of Health has secured a coverage of 96 % of prenatal immunization in the Central region.

Sister Dehab Solomon, head of Family and Community Health Unit at the MoH branch in the Central region, said that coordination and implementation of immunization programs, follow ups in children and health of the youth, child nutrition and providing consultations in reproductive health have been among the main tasks of the unit. Awareness raising seminars that have been regularly conducted has now registered commendable results, Sister Dehab explained.

According to Sister Dehab, 15 out of the overall 34 healthcare institutions in the Central region ARE rendering maternity service and thus have been playing significant role towards preventing complications that may occur during delivery.

The Central region, according to Sister Dehab, regulate immunization programs are being conducted against measles, polio, TV, Tetanus, hepatitis, diarrhea among other diseases.


#Eritrea: Immunization coverage rates in the range of 90-99% for DTP3, Measles and BCG for children 12-23 months.