I have the honor to write you in relation to the “enhanced interactive dialogue” on Eritrea scheduled for 12 March 2018. For over a month, the Eritrean delegation has engaged with Your Excellency, in your capacity as the President of the Human Rights Council, and the Secretariat – OHCHR, seeking clarification on the nature of the interactive dialogue and the composition of the panelists.

In those meetings, Eritrea’s concern on the lack of transparency and absence of fairness in the selection process have been raised.

As your Excellency and the Secretariat might recall, Eritrea made a request for the inclusion of organizations working inside Eritrea, and mining companies implicated in consecutive HRC resolutions.

They have been asking for a chance to share their experience and concerns on the state of affairs handled by the Council.

Along that, the Permanent Mission of Eritrea to the United Nations and other international organizations on 5 March 2018 sent a Note Verbal to the OHCHR. Subsequently, the Chief of the East and Southern Africa Section of the OHCHR, informed my delegation: –

The process set in motion by the Secretariat is indeed tantamount to allowing an accuser to select not only all the witnesses but also gives the accuser an absolute power to stifle any voice that does not conform to its established position on allegations. The process and action taken deprives the UN Human Rights Council to listen to diverse views on an issue.

As it stands now, the panel ’s composition reflects the political motives harbored. It includes a person who is a member of an organization involved in subversive activities against the Eritrean government, a personality with long-standing anti-Eritrea political stance and a special rapporteur whose mandate has long been undermined by her anti-Eritrea political activism.

The political manifestations were clear right from the beginning, yet Eritrea engaged the Council and the OHCHR in good faith, with the aim of ensuring fairness and balance in the dialogue. However, as it stands, the process is predicated on the will of the sponsor that wants to bring its political agenda of regional conflict to the platform of the Human Right Council. This is an abuse of the human rights mechanisms that we remain opposed.

The situation has dashed Eritrea’s goodwill and efforts to engage on the matter.  It creates a negative precedence and derails the Council’s efforts to discharge its lofty objectives of ensuring transparency, fairness, and balance. The genuine discourse and interactions that befit the promotion and protection of human rights are also undermined.

Let me state again that the exercise is serving the regional conflict that the sponsors would like to impose in the name of the Council.  In the situation of the impasse that transpired, the Government of Eritrea sees no purpose in participating in a politically driven exercise that denies dignified and fair engagement and flouts principled and impartial approaches.

I appreciate it very much if this letter is brought to the attention of the members of the UN Human Rights Council and distributed at a document of the Council.

Please, accept Excellency, the assurances of my highest consideration. 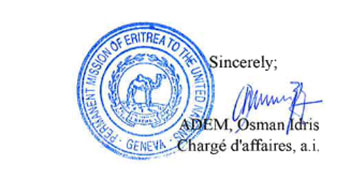