Eritrea Pull Out of the 2018 Tour du Rwanda

BY GEOFFREY ASIIMWE | THE NEW TIMES

With less than 72 hours to the start of the 2018 Tour du Rwanda, Africa’s cycling giants Eritrea have pulled out at last minute and were immediately replaced by Cameroon’s SNH Velo Club.

In the last decade, Team Eritrea Cycling have registered more victories than any other side in UCI Africa Tour races – including the 2010 Tour du Rwanda which was won by Eritrea international and Cofidis (French cycling club) rider Daniel Teklehaimanot.

Besides, the record stage wins (19), Eritrea’s Metkel Eyob has the most stage wins (5) in the race, a record he shares with two-time Tour du Rwanda champion Valens Ndayisenga.

Merhawi Kudus, another Eritrean, holds the record of the youngest (18 years and 300 days) rider to win a stage in Tour du Rwanda – he claimed Stage 1 (Kigali – Nyagatare ) of the 2012 edition.

The 24-year old finished second in the last two editions, first behind Ndayisenga in 2016 and behind Joseph Areruya last year.

Eritrea is fourth on the list of countries with the most number of riders that have raced Tour du Rwanda, 28, behind hosts Rwanda (44), South Africa (37) and France, 30. 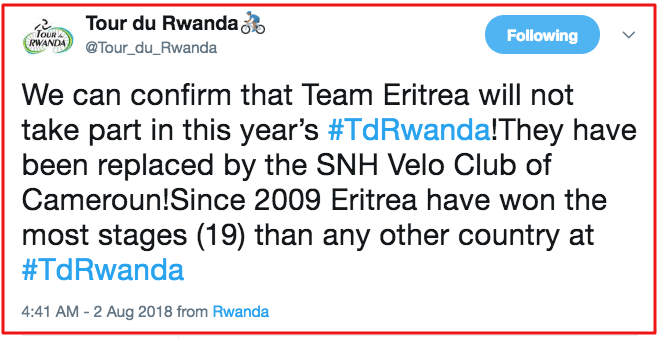