A total of 15 staff members of the Ministry of Health that have been pursuing distance education from the University of Dundee were graduated on 17 January in Masters Degree in the fields of Advanced Practice in Nursing and Global Health and Wellbeing.

Speaking at the graduation ceremony in which senior Government and Front officials, representatives of the University of Dundee, members of the Diplomatic Corps and invited guests took part, Ms. Amina Nur-Husein, Minister of Health, said that the program was part of the efforts the Government of Eritrea is exerting to develop human resources of the country in all sectors. 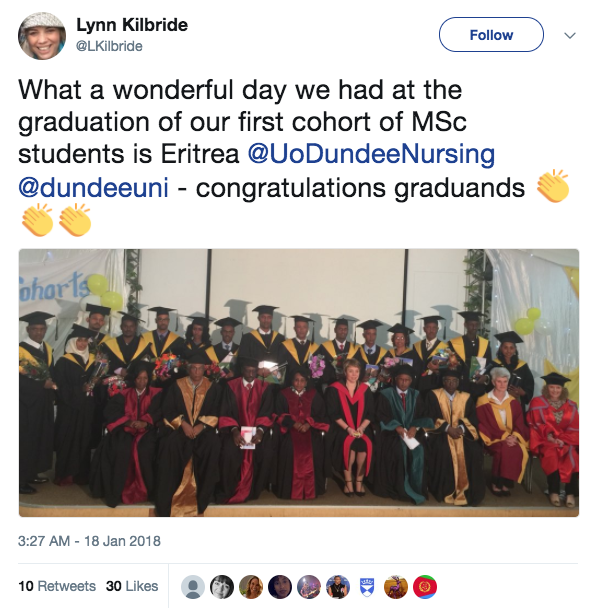 Indicating that since 2003, the Ministry of Health in collaboration with the University of Dundee has graduated 156 of its staff members in various fields, Minister Amina said that the Master’s Degree program is the first of its kind.

Prof. Lynn Kilbride, Dean of School of Nursing and Health Science of the University of Dundee, indicated that the 15 years of educational cooperation between the University of Dundee and the Ministry of Health has significantly contributed in developing the capacity of the staff members of the ministry and congratulated the graduates.

The graduates on their part commending for the opportunity they were provided expressed commitment to serve the public with dedication.

Indicating that developing pests, virus, and fungus resistant seeds inquires strong and complicated laboratory work, Mr. Mussie Fikadu, head of biotechnology at the research center, said that 140 kilos of select potato seeds were distributed to farmers and were able to produce 110 quintals and that attests to the effort exerted.

Mr. Mussie also said that so far 10 quintals of select potato seeds have been distributed to exemplary farmers and called for proper follow up for increased production.

He also indicated that laboratory work is underway to develop virus-resistant palm dates and that requires the availability of skilled human resources.

Pointing out that the objective of reproducing select seeds is to ease the challenges farmers are facing, the agricultural laboratory experts on their part expressed readiness to live up to expectations.