The Eritrea Festival of the Eritrean-German Community took place in the Hessen Halls of Giessen from 7th – 9th July 2017 and was attended by about 2,000 people.

With the festival, the Eritreans celebrate and present their culture, customs and tradition, celebrate special achievements, celebrate together and discuss with each other and like to invite all interested parties on all platforms.

“Our annual Eritrean Festival offers a wonderful and unique opportunity to meet Eritrean culture and traditions and to meet with Eritreans from all over Europe, especially Germany. It offers participants a network and discovery for a fun and creative environment. The audience will have an insight into the Eritrean culture, by colorful cultural performances, music, dance, exhibitions, Bazaar, educational seminars, discussion forums, sports as well as specific activities for children and young people,.”

Invited to the ceremony was the newly founded Deutsch – Eritrean Gesellschaft (DEG). At the official reception of festival guests, foreign minister of Eritrea, Osman Saleh, was present and answered all questions.

The chairman of DEG, Dirk Vogelsang, presented Minister Osman with the bestseller “Inherit the Wind” by Michael Lüders, that was translated in Tigrinya by Teclu Lebassi.

Other NGOs, associations and institutions working with and support the Eritreans were invited. These include: Eritrea Relief Society in Germany (EHW), Medcare, the Austria-Eritrean Society, the Advisory Board for foreigners, the Town Council Beltz (Group Giessen left, DKP) and friends.

Despite the invitation, Giessen Mayor and the City Council Mr. Neidel (CDU) couldn’t come but sent friendly greetings to the organizers and wished a successful celebration. 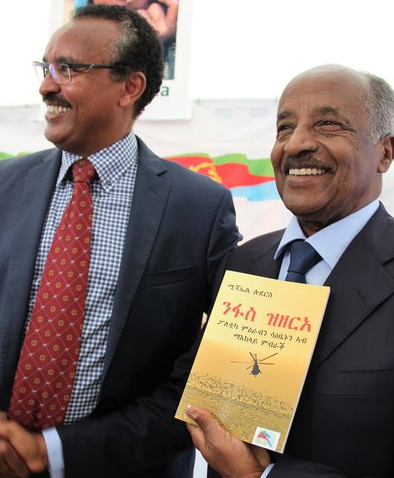 At the same time, Grotth (Greens), chairman of the parliamentary group, called for a counter-demonstration against the festival, after which about 100 people took part. They also came from Stuttgart and Frankfurt, and they insulted and attacked physically the visitors of the festival. This happened on the same day, when the capital Asmara, by the way, was declared a World Cultural Heritage by UNESCO.

Various media outlets still spread baseless defamation and lies about the country, particularly by people who have never been to Eritrea. Now, even the German Ambassador to Eritrea, Dr. Andreas Zimmer, rejected the attempt to designate Eritrea as a human rights-violating state, and rather compared it with Cuba (with its similar democratic suffrage).

In the end, hardly anyone is arguing that the poor but social country Eritrea is investing all its money for sustainability in areas of education, health and nutrition.