“Peace was a Surprise”… But to Whom?

The above quote, taken from the Eritrean national anthem, resonated with me while I sat there watching the extravaganza organized at Addis Ababa’s Millennium Hall in honour of President Isaias Afwerki, and by extension, Eritrea.

The event began with the Eritrean national anthem. Young Ethiopians, with broken but genuinely heartfelt Tigrigna, verbalized every word of the anthem and that moment right there reverberated waves of joy in every Eritrean heart.

The Ethiopian crowd inside and outside the hall, by some estimates 50 thousand but looked like 50 million, broke out in a roar calling out President Isaias’ name. All in unison, “Isaias, Isaias”. People were visibly shaken with bliss. Some in tears, some shouting, others hugging each other, and others dancing and singing.

This event was the culmination of a series of visits and exchanges that felt like they were happening at the speed of light, including a historic state visit to Eritrea by the Prime Minister of Ethiopia, Dr. Abiy Ahmed, on the weekend of July 8.

As President Isaias said during the state dinner in Addis Ababa, that momentous Sunday showed the world just how ready Eritreans were for peace. They showed up in tens of thousands in Asmara alone to welcome PM Abiy and declared to the world that this new chapter is something they have been waiting for and working towards for a very long time.

The Prime Minister’s visit ended with the signing of the Eritrea and Ethiopia “Joint Declaration of Peace and Friendship” in Asmara on July 9th, 2018.

Whether you were in Asmara or Mendefera or Massawa or Barentu, the three days that followed filled the air with a renewed sense of energy and purpose. People wanted to cement this peace once and for all and began playing out different scenarios of what it would mean on a regional and a continental level. Eritreans knew this day would come and were ready for it at every level.

Then came Friday morning and as every year during this period, families and friends, Ministers and other higher officials, and even the President of the State of Eritrea grace the graduation ceremony in Sawa.

Everyone could feel that something was different this year and when President Isaias declared that he would be taking the message of the Eritrean people to Addis Ababa over the weekend, the curtain of Peace was now fully open and Eritreans from all walks of life began saying this is history in the making and felt so proud and happy to be alive to bear witness to it all. The streets of Asmara were then filled with chants of “Wedi Afe, you succeeded”. 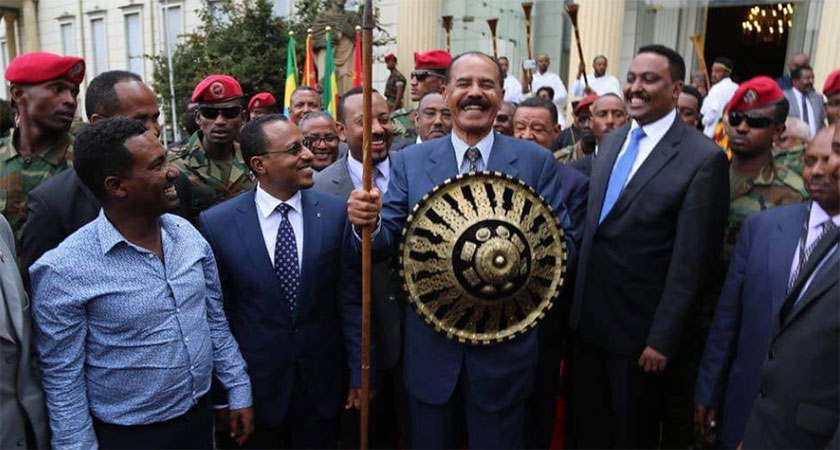 On the other side of the spectrum, there was the mainstream media and the international community. It was absolutely disheartening, although some would say expected, to see that, even at this most historic time, when Eritreans were finally able to show the world in a completely un-choreographed way their true feelings about Ethiopians and peace, these groups had the audacity to question the validity of these new developments.

The articles churned out at that point ranged from those who tried to re-write the sequencing of events of the past 20 years that led to this moment to those who completely diminished President Isaias’ role in steering the path towards peace. Some rehashed old stereotypes and worn-out narratives, and others, so very condescendingly and in a typical Eurocentric fashion, went as far as laying “demands” for the future of Eritrea.

You may recall that this same media now busy questioning and rewriting and “demanding” things is the same one that presumptuously declared that Eritrea did not immediately respond to PM Abiy’s June 5 announcement because it was taken by “surprise” and that it was “bluffing” since 2002.

Here are a few examples that would leave anyone flustered by such insolence: Aljazeera’s “How Ethiopia’s peace offer caught Eritrea’s regime by surprise“; Financial Times decreed that “Ethiopia calls Eritrea’s bluff on disputed border”; “No one saw it coming” said the Citizen; and The Economist allowed Tom Gardner to write that “peace poses problems for Mr. Isaias”.

This is the time to recall the opening statement of this article, “Eritrea foretold its ability to succeed” and all one has to do to prove this was no surprise at all to Eritrea and the Eritrean leadership is to flip through pages and pages of historical documents and patiently listen to piles of interviews of the past few decades – going as far as the armed struggle for liberation.

Here are just a few examples out of history that prove Eritrea’s principled consistency. In a piece published in Adulis Gazette, the EPLF declares its

“firm conviction that total independence for Eritrea and the emergence of a progressive government with popular support in Ethiopia are inseparable goals. Hence, the front encourages and assists those organizations and movements that push towards this goal while, at the same time, criticizes and opposes those forces and tendencies that harm the cause and push its attainment further away”. (May 1985)

During a press conference in Washington DC in June 1999, President Isaias, when asked about Ethiopia’s use of Eritrea’s ports, he said

“Massawa is a free port; Assab is a free port for Ethiopia. We believe the port (of Assab) shall be free to use not only to Ethiopians but everyone who wishes to use it, that’s our policy it won’t be a cause of any conflict. Any sensible person who believes that a landlocked country and one has got an access to the sea, why shouldn’t the complementarity of the interests of both countries demand or dictate the free use of these ports… I don’t see why the question of the ports can become a problem. It has never been a problem since 1991, it’s not a problem now and it wouldn’t be any problem in the future. It was the Ethiopian government that boycotted our ports and shifted to Djibouti. That’s their choice”.

“We can live together. There is nothing to prevent us from developing a relationship. Imagine how much we could have achieved in terms of economic cooperation, working together on the stability of this region, and working together to fend off threats. Because of the border, I’m not discouraged. We know we can live in peace and live by cooperating and probably integrating our economies gradually and doing trade. This border issue should not be. We have to remove it somehow,”

“Imagine an ideal situation, where a group of heads of state discuss among themselves and they arrive at a consensus, through exhaustive and constructive discussions, through structure, and consolidate their ideas in a document, finally creating an organizational set up for that. I think this is the only healthy way for us to regain lost opportunities and look forward to a promising future”.

During the same interview, President Isaias went on to say:

“We could have fostered solid relations with Ethiopia […] what concerns anyone is the opportunity we have lost. And who has created this crisis? It’s not the government of Ethiopia alone.”

In summary, the level of principled consistency exhibited by this leadership is simply unmatched. In fact, Eritrea’s vision for peace extends beyond its own borders – to Ethiopia in particular, and to the whole Horn of Africa region. Some would even say that Eritrea’s vision of peace and a peaceful coexistence – based on national harmony, political democracy, economic and social development, social justice, cultural revival, and full cooperation – actually extends to the entire African continent. 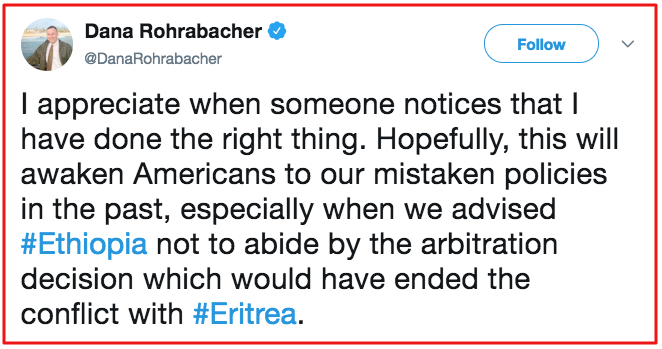 Going back to the last quote from President Isaias, one cannot help but tie that last part about an external role in creating the “conflict” with a recent tweet by Congressman Dana Rohrabacher where he said in response to a comment from an Eritrean American, Amanuel Beidemariam,

“I appreciate when someone notices that I have done the right thing. Hopefully, this will awaken Americans to our mistaken policies in the past, especially when we advised Ethiopia not to abide by the arbitration decision which would have ended the conflict with Eritrea”.

Throughout the years, Eritrea made statements, organized campaigns both at home and through the Eritrean Diaspora, and went on a genuine diplomatic offensive with the aim of shedding light on its motivation for peace. It wanted and did everything possible, albeit quietly, to solve the impasse with Ethiopia and move on to a chapter of cooperation and unhindered development.

Unfortunately, all these efforts were at best ignored and at worse distorted by the same mainstream media now claiming that this chapter of peace is a sudden surprise, a miracle, a bluff.

Lastly, in January 2018, in a televised interview, President Isaias actually signaled the reality that we are witnessing today. He said:

“What we proceed to do in this New Year has to be planned and calculated in a way that will best benefit this region […] For this region to prosper and develop in the future, all nations have to come together […] In the end, we all have mutual benefits to gain and just like we are ready to work together with the people of Ethiopia, there is no reason others can’t join as well […] The diplomatic relations we can possibly form with our regional neighbours as well as international friends, can be formidable and beneficial for both countries and the Horn of Arica. This is not an option. This has to happen at any cost”.

If this does not prove Eritrea’s leadership’s calculated commitment to a lasting peace, nothing will.

Peace was held hostage for far too long and it has been freed at last. The next chapter begins now – but no one should expect it to be smooth sailing because as the National Charter (1994) says, it is more difficult to build peace and development and “more complicated than winning war”.

Certainly, numerous challenges are awaiting both countries and peoples but peace remains the key ingredient. Just as the farmer tills the land, plants the seeds and waits, patiently, for the rain to come, so should be the process of building a peaceful society.

Peace must be nourished with hard work, love and mutual understanding and respect, as well as a consistent vision that guide all policies.