Schengen Peace Foundation and World Peace Forum conferred the ‘Luxembourg’ Peace Award to Eritrea and Ethiopia for the 2018 initiative to promote peace and outstanding peace achievement.

The awards were received by Mr. Negassi Kassa, Eritrean Ambassador to the European Union and Mr. Grum Abay, Ambassador of the Federal Democratic Republic of Ethiopia to Brussels.

At the ceremony conducted at the European Union Parliament Hall, Ambassador Negassi said that the peace agreement signed between Eritrea and Ethiopia has paramount importance for the two countries and the Horn of Africa region at large for sustainable peace and security, economic growth and regional cooperation.

Ambassador Negassi went on to say that the people and Government of Eritrea are committed to consolidate and sustain the peace agreement and redouble effort to recoup the lost time and opportunities and called upon partners and friends as well as the international community for their solidarity and support.

The Luxembourg Peace Award is a joint prize awarded by the World Peace Forum and the Schengen Peace Foundation that is conferred for outstanding contribution for peace. 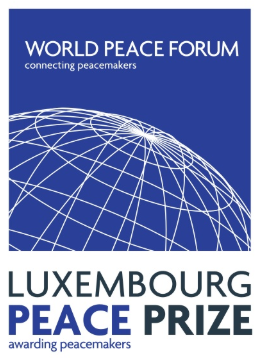 The 2018 Eritrea Ethiopia bilateral summit took place in July 2018 in Asmara, Eritrea, between Eritrean President Isaias Afwerki and Ethiopian Prime Minister Abiy Ahmed and officials from the two countries. The two leaders signed a joint declaration, formally ending the border conflict between both countries, restoring full diplomatic relations, and agreeing to open their borders to each other for persons, goods and services.

Speech by Eritrea’s Ambassador to the European Union, H.E. Negassi Kassa, on the occasion of the Luxembourg Peace Award conferred to Eritrea and Ethiopia

I am honoured and humbled to accept this important Peace Award on behalf of my country, the State of Eritrea, and reiterate my gratitude and appreciation to the Schengen Peace Foundation and World Peace Forum Luxembourg for Awarding my county this prestigious Luxembourg Peace Prize for its Outstanding Peace Achievement with Ethiopia.

I would also like to congratulate my brother Mr. Grum Abay Teshome, Ambassador of The Federal Democratic Republic of Ethiopia in Brussels, for accepting this important Peace Award on behalf of his country.

Eritrea values this Award of acknowledgement to the bilaterally achieved exemplary Peace Agreement of the two countries, signed in Asmara, Eritrea, on 9th July 2018 by the Eritrean President, H.E Isaias Afwerki and the Ethiopian Prime Minister H.E Dr. Abiy Ahmed.

The Peace Agreement has paramount importance for the two countries and the HOA region at large for sustainable peace & security, economic growth and regional cooperation.

The Award is also timely because now a new era of peace and friendship has been opened, heralding great hope and aspiration, as well as wide-ranging opportunities, for the peoples of the two countries and the HOA region and beyond.

The people and Government of Eritrea are committed to consolidate and sustain the Peace Agreement and redouble their effort and endeavour to recoup their lost time and opportunities. In this regard, Eritrea calls upon partners and friends of the two countries and the international community in general for their solidarity and support.

Once more, I express my earnest thanks and appreciation to the Schengen Peace Foundation and World Peace Forum Luxembourg for the Award accorded to Eritrea.