EdTech Lab at the Eritrea Institute of Technology grows

It was more than two years ago that we prepare the plan for the project, and now I get to see where we are and reflect where we need to go. Two years ago there was not edTech lab at the Eritrea Institute of Technology (EIT). I was afraid of pushing it too much. Just because we have one in Joensuu, it does not mean that it would work here. The Eritrean context is so different to the Finnish one, so many things could go wrong unexpectedly.

Two years later, I have witnessed how the EIT, its ICT Center and the Colleges are freely embracing the idea. This is partly due to the work of Marcus, Ilkka, and Samuel, who have motivated staff and students with activities and projects around educational technologies and provided a great space to do them.

One of the most remarkable projects is the “low cost low power computer”. Students have used the lab’s Raspberry Pi and 3-D printer to create a computer. They even sourced a small screen to attach it to the computer.

Recognizing that focusing only on the hardware is not enough, they went above and beyond to start the translation to Tigrinya of Ubuntu, LibreOffice, and Scratch. Over 50,000 strings have been translated by the students in long sleepless nights. The translation is still rough, they are not linguists, and Tigrinya, as other languages, is not prepared to express most of the expressions seen in software. From here, we call Tigrinya experts to step ahead and give us a hand in making Ubuntu Tigrinya-ready!

By the way, I just heard that the students were on the national television yesterday showing their computer.

INTERVIEW: Voice of America (VOA) reporter from Asmara have spoken with Simon Okubagergish, the project’s coordinator. Click the audio player to listen the full interview.

One weak point at the edtech lab has been the lack of input from the College of Education, and some of the projects have lacked pedagogical direction, even if they have marveled at ingenuity and at technical prowess. We are working more closely with the three colleges to define better the kinds of activities around the lab. That way we try to get the involvement of staff and students from the three colleges, and specially the College of Education. 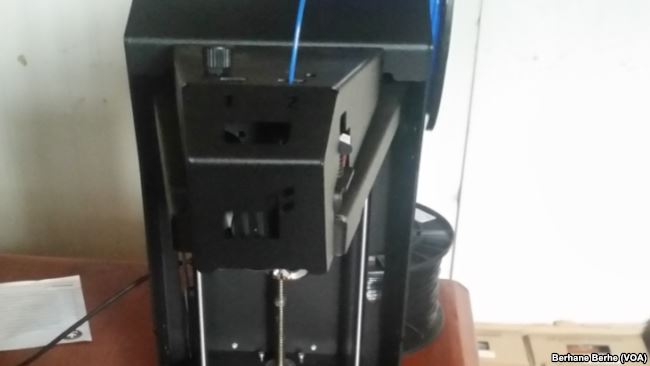 In the last semester, the lab has hosted other activities related to education. Rediet hosted workshops on Professional Development, Natnael took his students (Embedded computing) to practice with the available Arduino boards at the lab, high school students were taught robotics by EIT students,…

In the summer, members of the Eritrean diaspora visited EIT, and were positively surprised to find the edtech lab, and its active projects. Interestingly, one of the visitors was involved with an American company for robotic education. For now, we have got one of their robots for the lab, but surely, in the future, we will engage in deeper collaboration, as they can be a local link for sustaining the activities at the lab.

Sustaining the lab requires maintaining a community. A community that carries the institutional knowledge forward, but also commits to the daily operations. Students have been the biggest force up to now. However, they were in their last year of studies, and this year they move to their civil service assignments. Samuel has requested the commission that the lab should be assigned some of these students. We are still waiting the decision, but some have already been assigned to serve in other government offices.

And just now, Samuel and I come from meeting Mr Desbele, director of the Children Educational and Discovery Center. The Center is an ongoing project that organizes yearly events similar to Joensuu’s Science Festival.

The Center itself is quite impressive, well equipped, and clear focused. Thousands of kids attend with their families during the a whole week to what looks like a mix of a Science Museum and school activity room.

During that time up to 80 staff members support the activities. We are already imagining joint proposals to link the activities at the lab with the center.

So two year laters, the EdTech lab is a reality, and, while it still needs to mature, I could not have imagined all the activities that have happened in its short life.