‘A Child has the Right to be Healthy too …’

“A child requires the same rights as an adult; many don’t understand”, says Dr. Samson Abbay, a specialist in paediatrics at the Mendefera Referral Hospital. The passionate medical doctor explained how child health remains a challenge in Eritrea and especially in remote areas.

The well-furnished paediatric department of the hospital including its newly built Intensive Care Unit (ICU) on the outskirts of Mendefera is impressive in terms of materials and cleanliness. Patients come from all corners of the vast region of Zoba Debub. Nonetheless, Dr. Samson and his peers have introduced a mobile clinic which every three months, is on a road to remote areas of the region to treat children at home and, only if severe conditions are diagnosed is a child sent to the referral hospital.

Despite their rather young age, Dr. Samson and his peers took on the initiative to extend their rounding session far outside the hospital wards’ beds to round the villages. They understand the need of taking precaution and prevent many children from reaching the ER when in desperate cases. Which is why they took the ingenuity to venture outside the hospital and directly get hold of the children’s smile time before they fade to laments of pain.

Dr. Samson’s and his colleagues’ spreading helps in two ways: one is for regular check-ups and second is to manage and relieve the hospital patients’ wards’ crowdedness as many children get to be treated at home. In fact, health centres are spread out throughout the region. There isn’t a single minute in which these clinics are not supervised: nurses and community health workers are available 24/7.

“We used to have more than 300 patients visiting every day, which wasn’t possible to continue on the long-term”, the doctor said.

In fact, the number of children inpatients amounted to 1800 and went down to 600 a year since the implementation of this system.

Thanks to this newly introduced method, workload is now lowered, making better quality treatment and less expenses for the hospital and lower burden of transportation for parents. Most of the cases children suffer from are diarrhoea, nutrition issue or malaria. However, due to the high sensitization campaign, such diseases are rapidly dictated and quickly taken care of.

“The region is rich in access to clean water; thus, diseases related to sanitation are less common”, said the paediatrician. 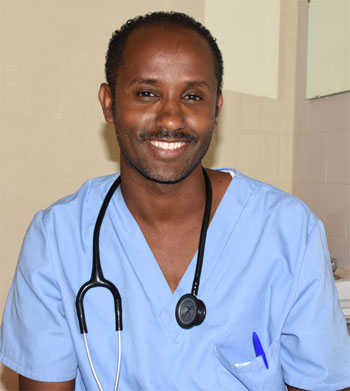 Eritrea has been successful in meeting the targets of the Millennium Development Goals 2015 in terms of reducing child mortality and improving maternal health.

Nevertheless, much work remains to be done for the country; specifically infant maternal health and awareness of risks of using traditional treatments.

In fact, Dr. Samson stressed that Eritrea has shown great progress in reducing under-5 child mortality, yet some issues persist still since the days of independence such as the lack of improvement in new-born mortality at less than a month old.

“Because the rate of death of new-borns hasn’t decreased much, it impacts the overall number of child mortality negatively”.

While cases of new-born deaths were registered at 23 out of the 178 in 1995 and today figures show very little decrease at 20 out of the 42. These results clearly illustrate that mortality of new-borns, less than one-month old, remain high in the country. The causes are multiple but the main one triggering this misfortune is mothers giving birth at home in the absence of medical equipment and health professionals. And adding up to the list of problems is the use of traditional medicine.

Up to 80% of the population in Africa uses traditional medicine as primary care while in many countries in the continent traditional birth attendants assist deliveries (WHO 2003).

Likewise, in Eritrea, traditional treatments continue to be used as primary care despite continuous efforts of the Eritrean government. As such, unregulated and inappropriate use of measures and practices may have dangerous impacts, particularly on children. Hence, cultural beliefs impacting health such as FGM/C are some of the traditions that Eritrea strives against every day.

Others, such as giving birth at home because the woman has to be under the care of her own mother, as dictated by cultural beliefs, are having negative consequences on women and the child leading to maternal death, fistula, among other life-threatening effects.

During our discussion, Dr. Samson showed me images of children made victims of such traditional practices, in many cases never making it out alive. Circumcision to male-born infant conducted by so-called “traditional doctor”, consist of some liquid given at birth, followed by an infection treatment with traditional products. These sporadic cases of FGM lead to unbearable infections and haemorrhages.

The alternative “treatment” consists of placing hot (boiled) leaves on skin diseases; a life-threatening practice frightening children for life. These are some examples of traditional treatments used on children that the medical doctor explained with a grieving heart.

The first few seconds of the new-born can be fatal. Out of all of the lives lost before reaching the first month of age, 30% maternal death and a relative 50% of total death in the subzone is due to inappropriate practice of traditional treatments. As mentioned above, the causes of mortality of new born infants are mainly giving birth at home, hygienic issue and respiratory/ asphyxia.

Child marriages are also causing child death when and if the underage mother encounters complications during delivery. Fistula complications trigger automatic death of the child as the mother’s body isn’t very well developed yet.

“Our biggest challenge is women giving birth at home. Only 40% of women give birth under the supervision of health professionals when compared to the national average of 50%” Dr. Samson said.

The challenges in regards to children health require stronger focus on specific areas through programs such as that of Integrated Management of Acute Malnutrition (IMAM), supervised by the Ministry of Health in partnership with UNICEF. A good program that focuses on training community health workers on nutrition issues and infant health mainly in remote areas.

“Differently from that of FGM/C, there are no legal proclamations against such instances; it is difficult to prevent people from using traditionally eminent practices, particularly to cure children”, the paediatrician added. Indeed, improvements are possible through awareness campaigns as well as legal undertakings against harmful practices.

“Adults have to understand that a child has the absolute right to be healthy and shame on whoever that threatens the wellbeing of the young, helpless and fragile human being”, the doctor wisely concluded.

In addition to developing better access to health centres by easing transportation links in remote areas, eliminating wrong beliefs linked to the meaning of health has been one of the top priorities of the government of Eritrea, and an intimate concern of professionals who witness the ugly outcomes of it.