The Tour de France rolled into Paris for its final stage over a week ago, but the party continues in East Africa’s Eritrea. The country welcomed home Merhawi Kudus and Daniel Teklehaimanot Saturday after they helped MTN-Qhubeka become the first professional team from the African continent to race the grand tour.

Kudus, 21, was the youngest rider in the 2015 race. Teklehaimanot became the first African to wear the polka-dot climber’s jersey, taking it for four stages in the first half of the three-week race. 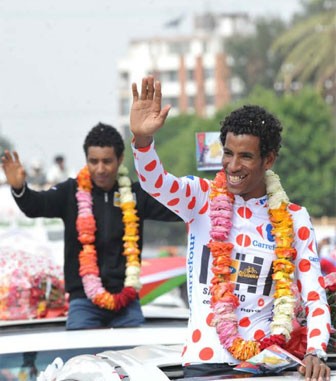 “It’s an honor that now our Africans are known and that we need to step up the team structure even more to support them.”

“It’s great for cycling to get an African team,” Cummings explained at the Tour. “There’s a lot of talent in Africa who doesn’t get a chance. [The team] makes sport bigger and better across five continents.”

Eritrea and the rest of Africa went crazy for the nine-man team. From Utrecht to Paris, a group of Eritrean-flag-waving fans followed MTN’s black and white bus. Most days, while the French applauded and pointed at the stars, the Eritrean supporters sang and danced for the country’s first cyclists in the Tour.

Given the party atmosphere over the three weeks, it seemed only right that when Kudus and 26-year-old Teklehaimanot touched down in the capital city of Asmara that the stage gave them a hero’s welcome.

Team MTN-Qhubeka called the celebration “crazy.” Images, beamed around the country live on state television ERI-TV, showed thousands of locals lined along the main streets of Asmara waving the country’s blue, red, and green colors and dressed in polka-dots. Kudus and Teklehaimanot sat on top of white Toyota trucks in matching red dots for a ride from the Asmara International Airport to the president’s palace to meet Isaias Afwerki.

The two were interviewed on television and sat as special guests — Kudus in the team’s black colors and Teklehaimanot in a polka-dot jersey he brought home from France — while locals sang and danced in their honor at the Bahti Meskerem Square.

Eritrea, still recovering from a war with Ethiopia, sits a lowly 42nd in a list of the richest African countries. With Kudus and Teklehaimanot reaching a global audience during three weeks of the Tour de France, an entire nation’s spirits appeared to be lifted.