Eritrean President Isaias Afwerki raised hope for a breakthrough in one of Africa’s most intractable conflicts on Wednesday when he described recent peace overtures from archenemy Ethiopia as “positive signals”.

Speaking at a Martyrs’ Day event in the capital, Asmara, Isaias said he would send a delegation to Addis Ababa to understand the position of new Ethiopian Prime Minister Abiy Ahmed and “chart out a plan”.

It was the first response from Eritrea to Abiy’s shock pledge this month to honour all the terms of a peace deal that ended a 1998-2000 war between the Horn of Africa neighbours.

Adding to the positive mood, Abiy’s chief of staff said the prime minister welcomed Isaias’s statement and promised the Eritrean delegation would be welcomed “warmly and with considerable goodwill”.

The war drew comparisons to the First World War, with waves of soldiers forced to march through minefields towards Eritrean trenches where they were cut down by machine-gun fire.

As many as 80,000 are believed to have been killed in total.

Disputes over the still-militarised border, in particular the town of Badme, have kept the two sides at loggerheads, with Asmara using the Ethiopian threat to justify its hefty military spending and long-term conscription.

However, Abiy, a 41-year-old former soldier who has outlined a series of radical reforms since taking over in March, stunned Ethiopians this month by saying he was prepared to honour international rulings that put Badme, which Ethiopia has refused to cede, in Eritrea.

Isaias said the concession, which is likely to meet opposition from hardliners in Ethiopia’s ruling EPRDF coalition, stemmed from the desire of both countries to reach long-term “peace and harmony”.

“The positive signals issued in these past days can be seen as an expression of this popular choice. We can say that the positive messages which have been circulating of late are signs of the people’s choice,” he said, according to the official translation of his speech on state EriTV television.

“Outside myopic considerations of public relations stunts and advantages, we will send a delegation to Addis Ababa to gauge current developments directly and in depth as well as to chart out a plan for continuous future action.”

There were no further details of the mission, including its date or remit, although Eritrea’s ambassador to Japan, Estifanos Afeworki, described it on Twitter as a “constructive engagement”.

“He also expressed his readiness to welcome warmly and with considerable goodwill the Eritrean delegation to Addis. #Eritrea #Ethiopia.” 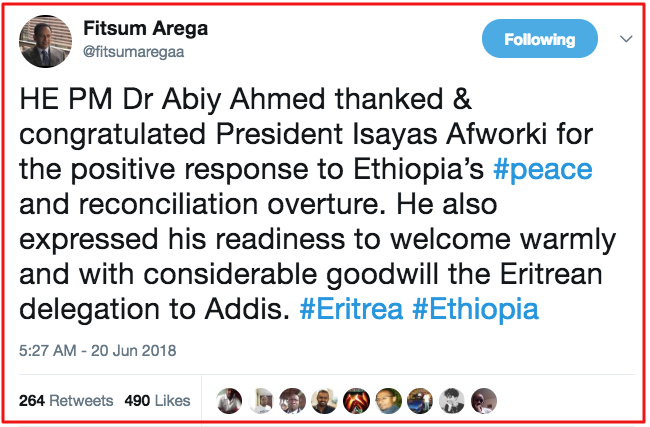 Eritrea has no diplomatic relations with Ethiopia, although it has an embassy in Addis as part of its representation to the African Union, whose headquarters are in the Ethiopian capital.

In parliament this week, Abiy acknowledged that the tension was inflicting a heavy economic cost on both countries and said Addis should no longer hide this price tag from the Ethiopian people, another stunning departure with the past.

Although welcomed across East Africa, Abiy’s concession met opposition from veterans of the war still living in Badme and ethnic Tigrayans living in Tigray province, which lies along the Eritrean border.

Some Tigrayans, who have long been the leading ethnic group in the EPRDF coalition that has run the nation of 100-million for more than two decades, are concerned their interests will be hurt if Badme is surrendered.

Residents told Reuters a protest had already taken place in the Irob district in Tigray over the decision by Abiy, a member of the Oromo ethnic group, Ethiopia’s largest.

After Abiy’s Badme announcement, the Tigrayan People’s Liberation Front, a regional political party that had dominated the EPRDF until Abiy took office in April, came out swinging against any concessions to Asmara.

“The Tigrayan People’s Liberation Front will not take part in any process that harms the interests of the people of Tigray,” it said, demanding that any withdrawal is linked to additional concessions from Eritrea.