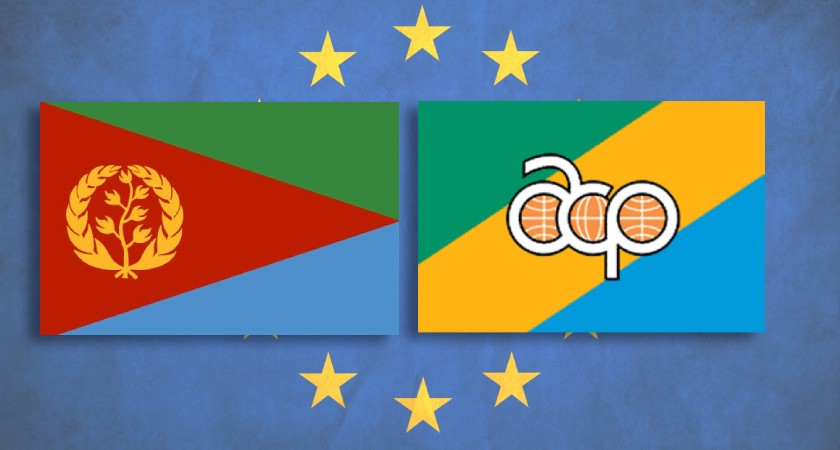 Statement of the Eritrean Delegation to the 56th Session of the Organization of African, Caribbean and Pacific States/OACPS Parliamentary Assembly,

Thank you for giving me the floor. Sadly, on October 8 this month, the European Parliament [EP] adopted a resolution replete with baseless allegations and insults to Eritrea. Due to the brevity of time, I will focus on the most egregious recitals and paragraphs of the resolution.

1 The title of the Resolution indicates that the EP act is prompted “notably by the case of Dawit Isaac”. However, fourteen out of the twenty recitals and 12 of its paragraphs have nothing to do with this person. This fact clearly demonstrates that “the Case of Dawit” is invoked as a mere pretext to pursue sinister agendas of portraying a very bleak picture of Eritrea and so as to demonize its Government.

2 The “Case of Dawit Isaac” itself cannot be misconstrued as an issue of human rights and freedom of expression as claimed in the Resolution. The grave offense – in which he was complicit – is related to treasonous acts perpetrated by a certain group (so-called G15) in 2000 at the height of the war of aggression by the TPLF-led Ethiopian regime and that claimed, in aggregate, more than 150,000 lives.

The fact that this person has Swedish dual nationality does not, evidently, exempt him from legal accountability. The offense was committed on Eritrean soil where he was working under a local license. Meddling in this case is a clear violation of Article 2 of the UN Charter which clearly stresses non-interference in the internal affairs of States under any pretext whatsoever.

3 The Resolution under paragraph 8 requests the “Commission to ascertain whether the conditionality of EU aid is respected …and to evaluate tangible outcomes regarding human rights that have resulted from the EU strategy of “dual-track approach”.

Eritrea is not a party to an agreement with the EU predicated on “dual-track approach” and that stipulates conditionalities that corrode its sovereign political choices and decisions. Eritrea understands that the multilateral development cooperation with the EU is governed by the Cotonou Agreement. In this respect, Eritrea rejects any extraneous conditionalities in breach of the Cotonou Agreement and will never be a party to such an arrangement.

4 The Resolution further accuses Eritrea of the seizure of “Catholic-affiliated schools and health facilities, thus negatively affecting the health and education rights of the population”. Again, this is another false narrative that distorts the policies and delivery of health and education programs in Eritrea.

In the first place, the law that restricts religious institutions in developmental work was enacted in 1995. The Government held extensive consultations – at the highest levels – with all the religious institutions prior to the announcement and implementation of the Proclamation. The law was implemented fully – with few discrepancies here and there – by the Orthodox, Protestant, and Islamic faiths.

The principal reason behind the policy is to ensure the integrity of the secularism of the State in a multi-religious society. Religious groups can donate funds – and this has to be generated locally – to development projects under implementation by the various Regional Administrations. But they cannot be involved in direct implementation because that is fraught with catering for their own followers to create asymmetry and societal polarization. These are, indeed, basic social serves that the Government equitably provides to all the population.

As to the claim that the two basic services of health and education have been negatively affected by the policy, this is simply false that cannot stand the scrutiny of statistical figures available in the public domain. The services provided by the Catholic wards or schools were a drop in the ocean compared to what is done by the public sector (or non-sectarian private sector) on a national level.

Eritrea has achieved most of the Millennium Development Goals prior to the deadline and is fully prepared and committed to the implementation of the goals and targets of 2030 on Sustainable Development Goals.

The provision of equitable quality education is one of the top priorities of the Government. Education is free from pre-school to tertiary level. This includes the provision of free boarding at the tertiary level as well as in more than 50 secondary and middle schools to enhance equity of access in relatively deprived rural areas.

5 The Resolution alludes to the dividend of the Peace Agreement signed between Eritrea and Ethiopia in 2018, to audaciously point an accusing finger on Eritrea for not availing of the new climate. These are stipulated in recitals N, O, and P. This is appalling.

The European Parliament has no moral high ground to talk about the peace agreement signed between Eritrea and Ethiopia in 2018.

The European Union was one of the guarantors of the Algiers Peace Agreement. But the EP and EU shrugged their legal responsibilities when the previous Ethiopian regime flouted international law, continued to occupy sovereign Eritrean territories, and pursued a reckless polity of continued war and aggression against Eritrea.

Throughout these years, the TPLF regime continued to receive substantial financial, diplomatic, and political support from the EU without regard to its flagrant breaches of international law.

The European Parliament did not adopt a single resolution to deter war and promote peace during these long dark years.

6 The EP Resolution recycles, almost as-is, the fallacious reports of the UNHRC Special Rapporteur on Eritrea. These are included in recitals H, J, K, and in paragraphs 2, 6, 7, and 10 of the Resolution to constitute almost one-fourth of the entire document. This fact alone demonstrates that the content and spirit of the Resolution is to use the “human rights agenda” pursued at the level of the UNHRC at the European Parliament platform.

As we have elucidated on previous occasions, the UNHRC format was invoked in 2012 when certain countries were actively pursuing a “regime change” agenda against Eritrea. The remnant of this deplorable agenda is still entertained by some EU countries.

Be that as it may, the relevant issue here is that certain EU Member States must not be allowed to leverage the European Parliament and other EU platforms to vilify a single ACP State. Bilateral disagreements or adversarial relations between some EU Member States and an ACP State should be contained within that ambit.

In conclusion, let me stress that international partnership in addressing issues of human rights is best served by constructive dialogue; not through politicization, double standards, and stigmatization.