Every sector of a country’s economy is crucial for its national development, and, government owned and private organizations and institutions periodically assess their performance to evaluate their progress. That is what the Ministry of Agriculture (MoA) did in the final days of last week.

The two-day annual assessment meeting of the MoA heard the reports of the six regions in general and the agricultural divisions in particular. The six regions presented their annual assessments on day one and the next day was reserved for a series of presentations of the national agricultural research institution, the division of planning and statistics, the human resource development division, the national laboratory as well as public relations and agricultural extensions. The presentations essentially explained that the agriculture ministry is by all means exploring avenues to go an extra mile of sustainable national development.

Presentations by representatives of the six regions have provided audience detailed information on issues of rainfall, soil and water conservation, afforestation programs, wildlife progress, crop productions, vegetable and fruit productions, animal husbandry and its productions, pesticides and others impacting the overall economic status of the country.

The presentations included comparisons of the previous two years in terms of production and shortages.

Experts proved that conserving soil and rain water yields from 20% to 40% growth in production and applauded the relentless work being carried out by every region to make this a reality.

The regions particularly discussed the main targets and major achievements they made last year. The Northern Red Sea region managed to protect its crops from a sheer locust attack. The Southern Red Sea region showed a promising progress in honey production, cultivation of crops and in an irrigation based dates and lemon growing activities. In the South region the major achievements were the earning of a total of 1.6 million quintals and the successful animal vaccination.

While checking on the Central region, the region registered a surplus of total production of over 236,509 quintals compared that of 2015, which was 85,362 quintals. Seeds were sown on a 25,682 hectare land which was 22,974 hectares in the previous year. Instituting the new agricultural technology of tissue culture, successful introduction of new potato seeds and the completion of smokeless stoves (Adhanet Mogogo) the growing number agricultural terraces were mentioned as other big triumphs.

The largest region in Eritrea, Gash Barka, has seen many programs implemented concomitant with its size. The major tasks, include the rapidly spreading tiny peas, the introduction of quality barley which in 2016 yielded 89 quintals in Tessenei on a 6.5 hectare of irrigated land and the compulsory animal vaccination. 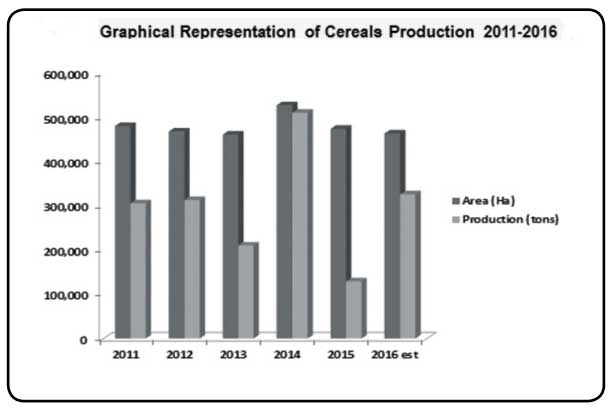 The representatives of the region generally conclude that last year’s production was satisfactory but when compared to 2014, a bit lower. This is due to shortage of rain fall in the sub zones such as Goluj that significantly affect the region’s total production. A third of Goluj sub zone has agricultural field is cultivated using rain water.

Anseba region on its behalf showed a significant growth in the overall production of cereals, oil seeds and legumes, 406,410 quintals and a surplus of 378,840 compared to the previous year. According to the Planning and Statistics Department, the agricultural statistics related to productivity indicate a gradual increment in the production of cereals, from 0.64 tons per hectare in 2011 to 0.70 tons in 2016. Same with vegetable production. Fruit production has been showing production inconsistencies in the last six years.

In the meantime, some heavy rainfalls across some regions last summer caused disaster in crops and, as a result, production diminished. For instance, some 885.25 hectare of various crops planted in South region were totally destroyed by hail storm and heavy rain.

Outbreak of diseases in all the regions were contained. The Agricultural Extension department reported that a total of 2.1 million livestock were vaccinated against sheep and goat pox, Anthrax, Rabies, poultry diseases and others. Farmers in Anseba region got well informed about the program of sub unit compact agriculture and like the other regions, conducted a wide spread animal vaccination.

On the occasion, Minister Arefayne Berhe said that food security should no longer be a concern and the focus should be on how to get balanced diet. The minster further recommended that farmers should not be restricted only to producing cereals but they should equally work on cultivating oil seeds with the aim of balancing these seeds with legumes. The other produce discussed was sweet potato. Considering its nutritional significance for children and its resistance to drought, farmers are expected and urged to keep producing it.

Some of the other activities that the meeting stressed were the following: widening farmers’ agricultural activities through dams; supporting the nurturing of rabbits and pigs; taking good experience from the Buffalo production activity; beside raising the skills of about 90% of its youth employees remains a concern for the ministry.

Minister Arefayne further noted that semolina (locally known as Aja) is an important produce and has a nutritional value particularly for children, thus should be cultivated as well. Though the progress made on beekeeping is positive, it was stressed that more could be harvested by helping every peasant have his own bees.

On his final remarks, the minister underlined the importance of having the smokeless stoves as they are playing an indispensable role in protecting trees. Most of all, he addressed that becoming practical on development plans would certainly add pace to the national economy. The ministry is currently working on 43 ongoing and new projects operated by all divisions.

All of this is just a bird’s eye view of the overall assessment the responsible divisions and regions reported during the annual assessment. Practically, the ministry has made it its guiding principle to serve the entire society by ensuring it gets the most out of the least.

Through the prospective plans of strengthening its monitoring and evaluation systems, and through gathering statistics on agricultural activities, price and market information systems along with follow-up activities and collaborative works with national, regional and international partners, the end could be achieved.