Enigmatic Eritrea: Engagement, Investment and Development in the 21st Century 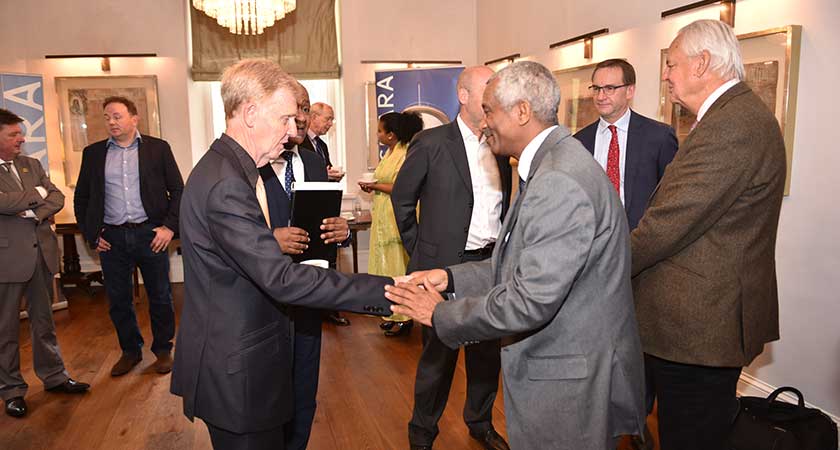 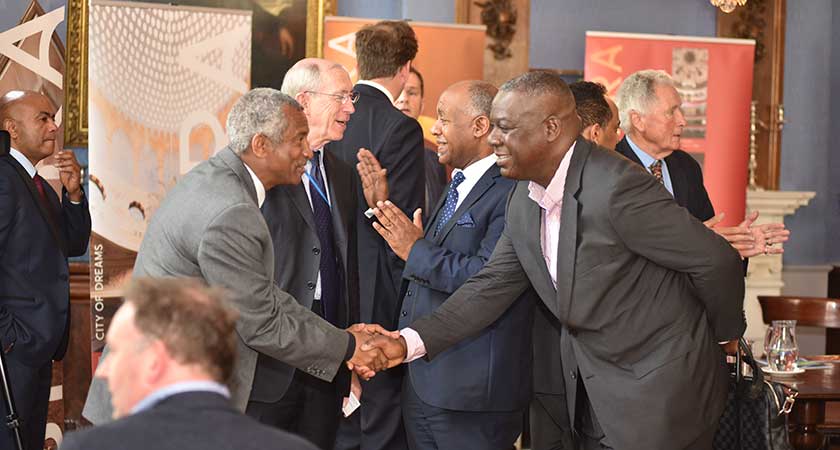 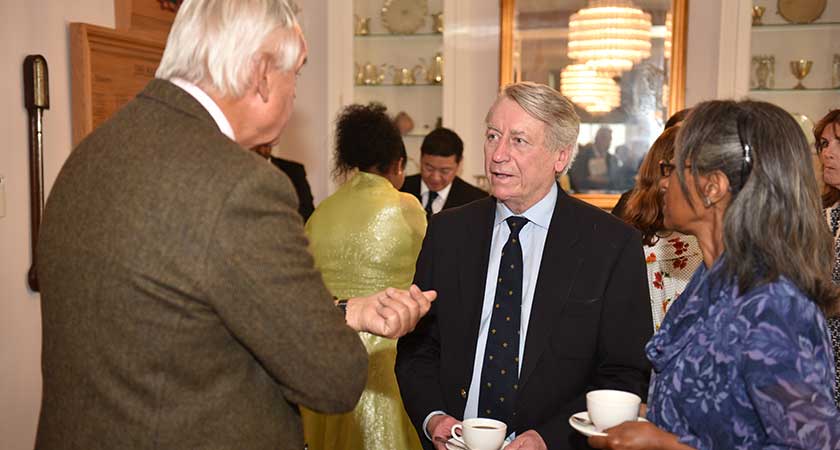 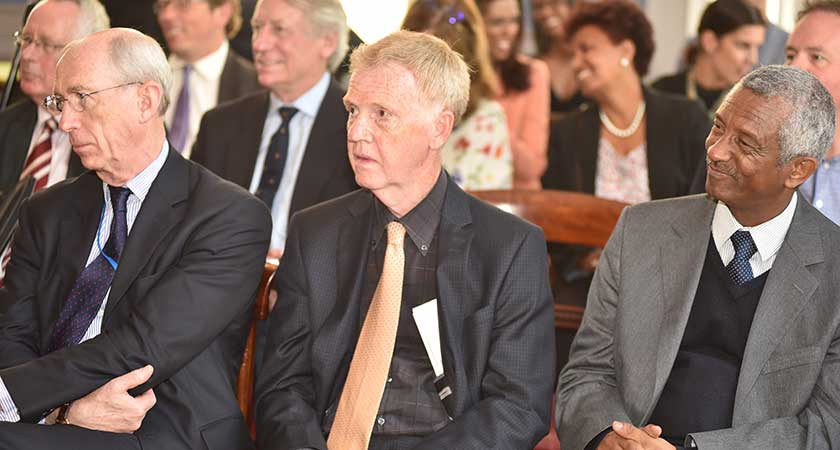 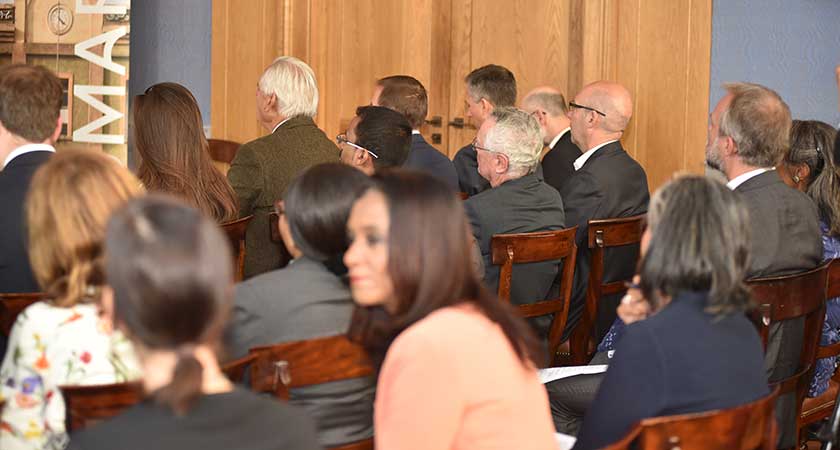 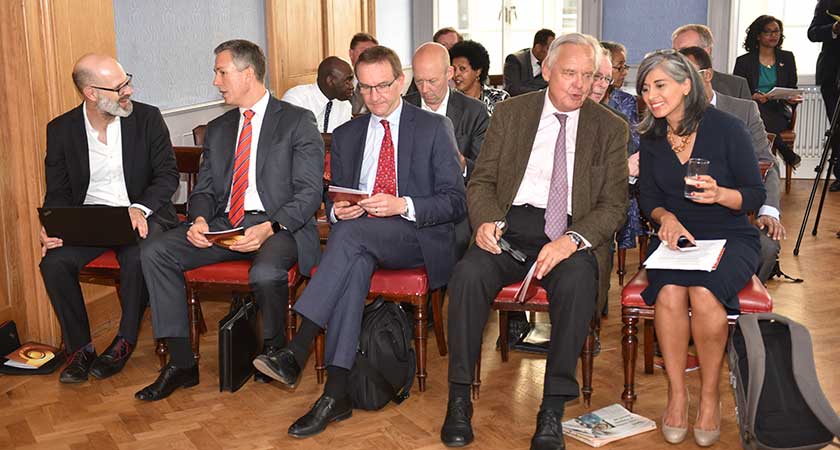 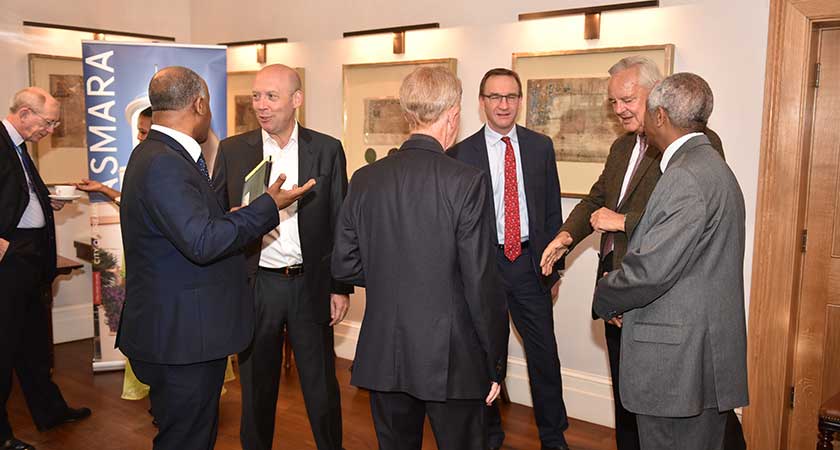 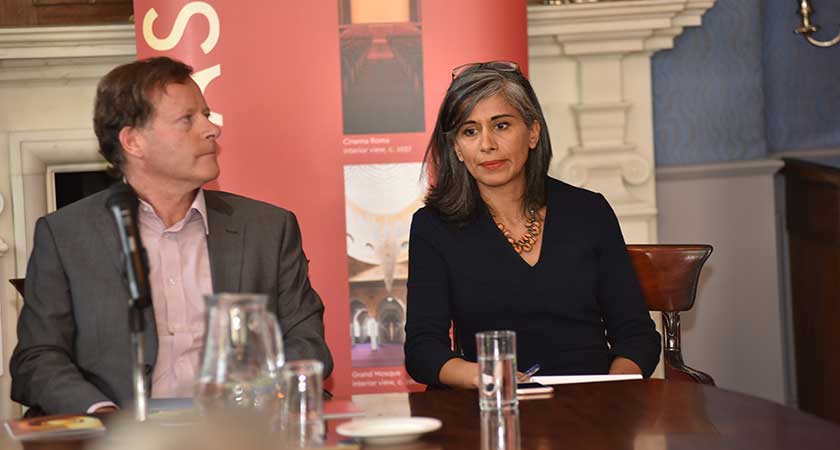 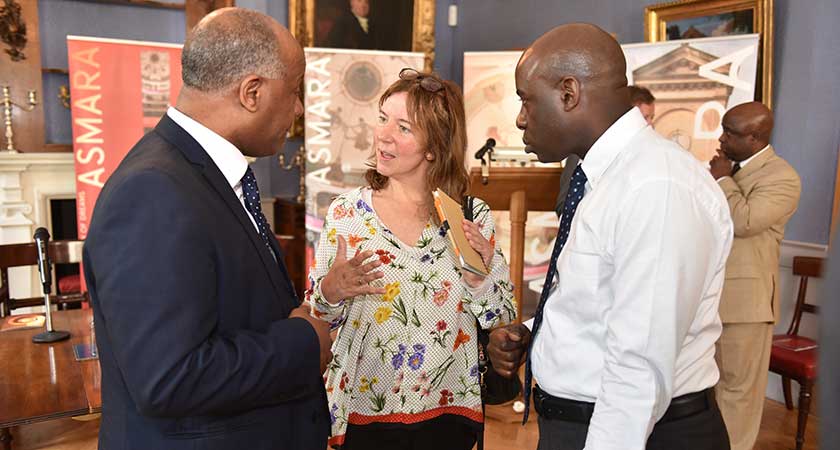 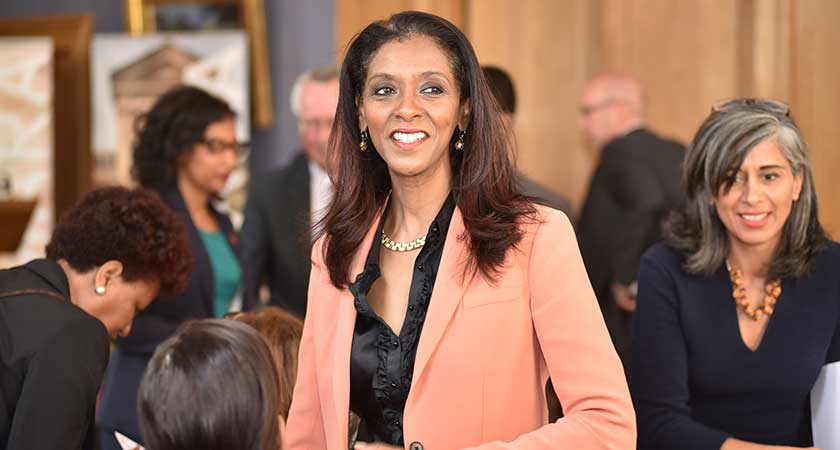 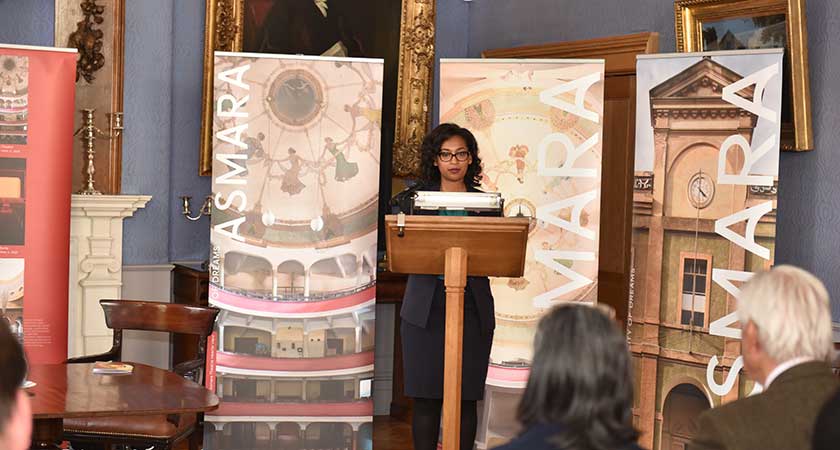 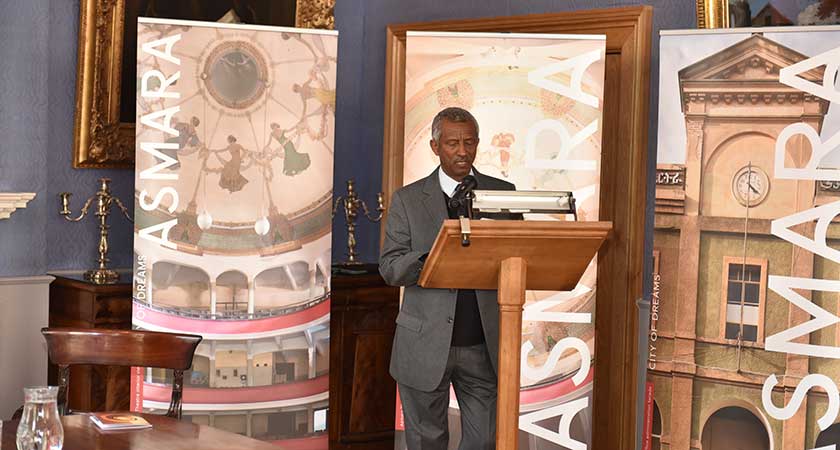 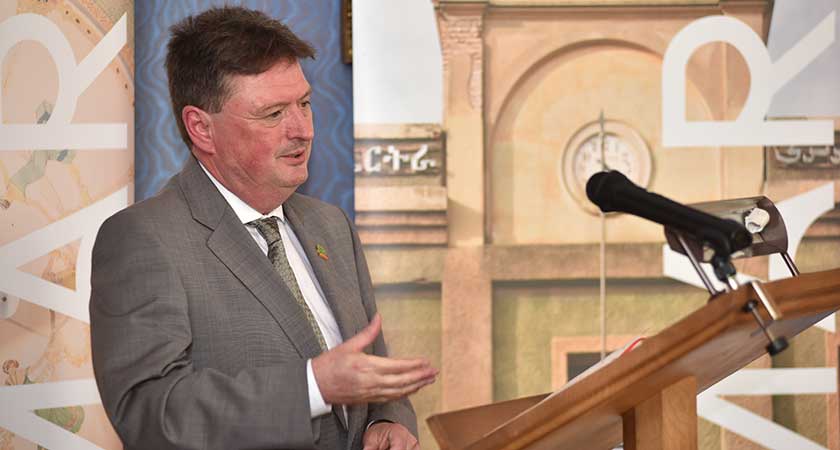 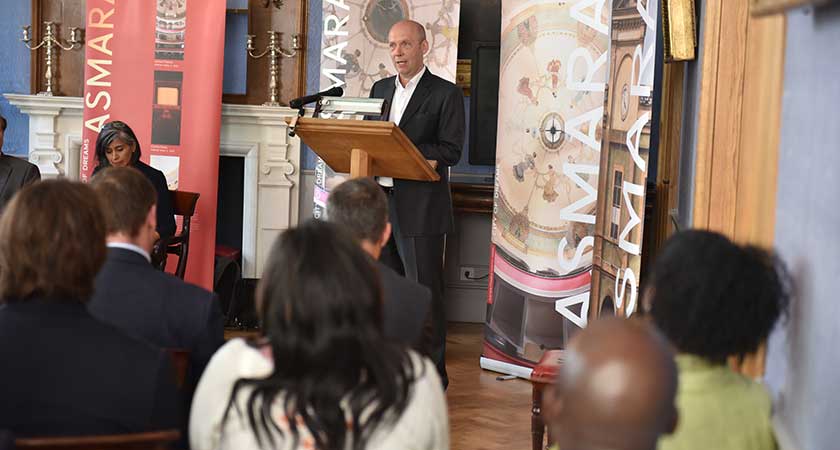 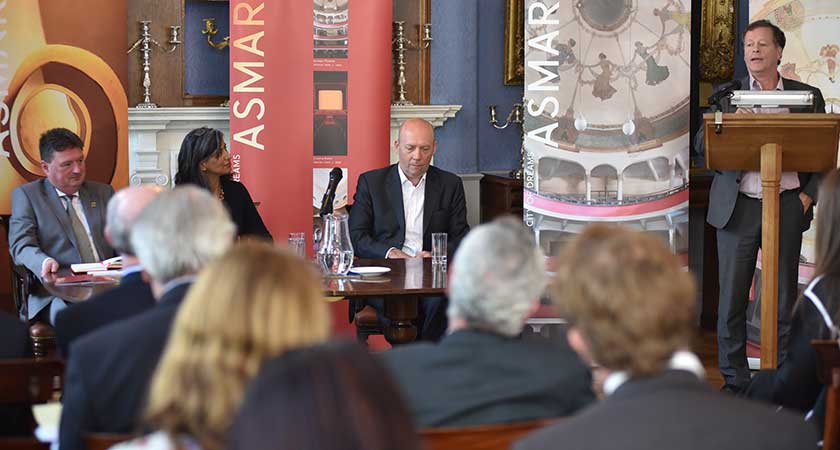 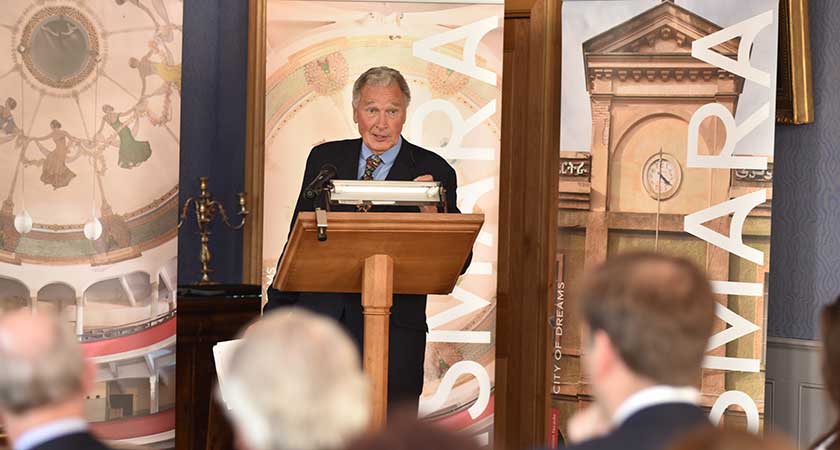 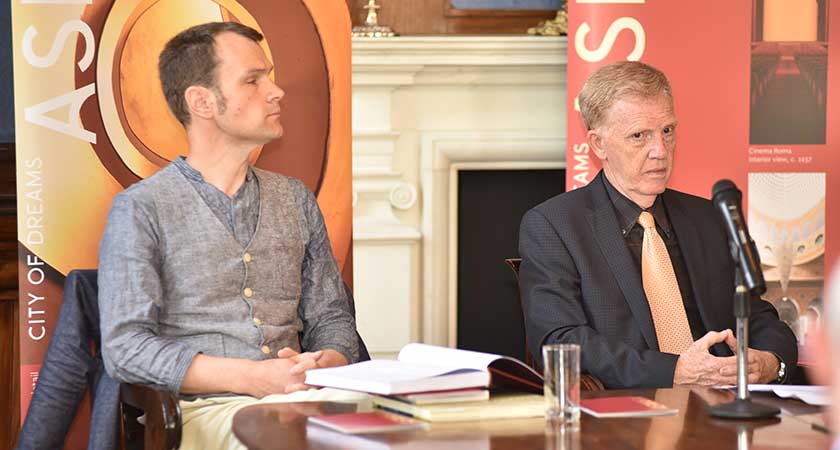 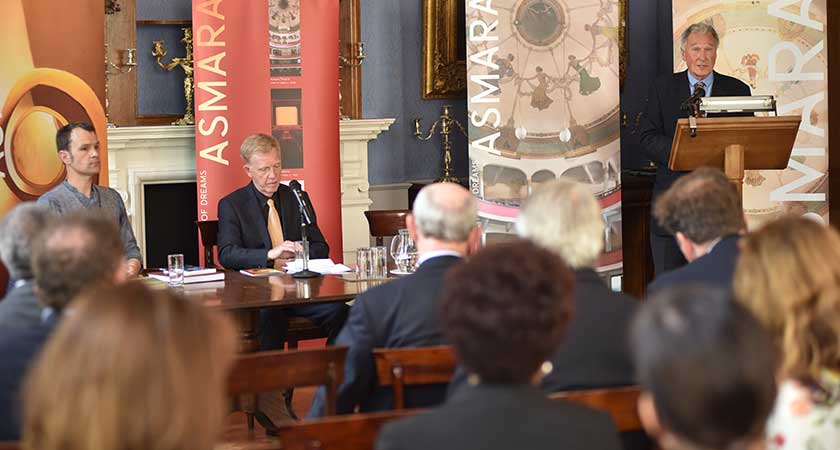 On the occasion of Eritrea’s 26th independence anniversary, the Embassy of the State of Eritrea hosted a forum at a prime location in the city of London under the theme “Enigmatic Eritrea: Engagement, Investment & Development in the 21st Century.”

Every year, the Embassy of the State of Eritrea to the UK & Ireland brings together over 50 members of the Diplomatic corps, MPS, MEPs, Mining Industry CEOs, Law firms, Consultants, Journalists, and Academics to address and share information about Eritrea.

Opening the event PA to the Ambassador of the State of Eritrea Ms. Yohanna Paulos welcomed the guests and gave a brief introduction to the event before welcoming the Ambassador an opening speech.

Eritrean  Ambassador to UK & Ireland, H.E. Estifanos Habtemariam, highlighted on the theme on how in today’s political climate is fitting of Eritrea’s endeavors of international cooperation, exploring different areas of opportunities of investment and working towards a sustainable development process in Eritrea.

Ambassador Estifanos Habtemariam further noted on how the government and people tirelessly engaged in the parallel duty of protecting sovereignty whilst working towards ensuring food security and rebuilding the nation contextualizing it to agriculture, healthcare, education, infrastructure and mining providing a synopsis of achievements registered to date.

He further stressed how Eritrea’s self reliant development process is one that has met endless challenges and hurdles concealed as border disputes, unjust sanctions and allegations of human rights abuse seeking to sabotage our rich and proud history and our hard won independence.

He further stressed Eritrea needs to be commended on religious harmony in the country and how this is felt in various organisations through out the country before signifying the need for outward media to make a breakthrough in countering false narrative.

Ambassador Peter Ford on his part spoke of his interest and sympathy to Eritrea for three decades, touching on the geo-politics surrounding Eritrea. He then focused on three areas, which is resilience, resourcefulness, and cohesiveness of the society within the context of the “Never Kneel Down” motto.

He also spoke on how corruption was rare and how adversaries of Eritrea operate linking it with brain drain and misguided policies of immigration and asylum.

Dr. Edward Denison on his part started with the 20-year relation he had with Eritrea and while touring Africa, how Eritrea resonated with him. He described it as “a walk in Asmara is a phenomenal experience for westerners” and appreciated Eritrean’s relationship with their city.

He further noted on his keen interest of why Eritrea wasn’t a global knowledge, and is under represented while two countries Italy and Spain have more cultural heritage representation more than the entire African continent.

He also spoke about the cultural assets rehabilitation project, the UNESCO nomination dossier, and the work done with the push of the Eritrean government on self reliance and increasing of capacity on scanning, planning, and digitally scanned the archives which he described as the richest archives he had come across.

Dr. Edward also went to explain the process of the Asmara World Heritage Project and how this would act as a platform for other sites such as Adulis, Quahiyto, Massawa to redress the imbalance created by the failure of international institutions. On the issue of moratorium he explained how the Eritrean government made a halt on building for 15 years to give time to understand it and how the Asmara building heritage and municipality worked to legally protect whilst allowing the city to thrive and develop.

On closing remarks, Mr Gordon Peters mentioned the positive role of education within the country and was impressed even in rural areas people were able to speak English. He also wanted to leave participants with the last image being the tank cemetery and how soviet and American tanks spoke volumes on how Eritreans say this isn’t a way we want to live.

On her opening remarks, Ms Sandhu spoke about the dirty media war Eritrea faced emphasizing on what H.E. Ambassador Peter Fords points on Resilience, Resourcefulness, Cohesiveness and Self Reliance. She went on to explain of the need to history in order to understand Eritrea, from colonisation to 1998 border war and the international community failure to implement the Algiers Agreement of the Eritrean Ethiopian boundary commission. She also spoke of he experiences of her visits on numerous occasions and different capacities.

Mr. Seamus spoke gave a brief introduction on the company and the use of potash, and went in to detail about the experiences they had with the Eritrea referring to personal accounts and how the Fraser Institute review ranked as the 6th most attractive mining investment destination in Africa.

He went on to elaborate on how corruption is non-existent and every government institution works professionally with functioning departments working independently and doing what they would say they would do. He stressed it is impossible to take shortcuts in Eritrea and things might not be as fast but everything is through. Before finishing, he also mentioned the fact they were not expected to do the feel good projects as the Eritrean government is engaged in building schools, roads, and hospitals.

On his part Mr. John Weaklian spoke about the extraordinary resilience of the Eritrean people and commended how freedom fighters after independence turned to civil service with little or non-significant payment, and how the new generation has also took on this role.

He went on to passionately speak about the survival of Eritrean economy going into detail about the economic war Eritrea had to fight. In relation to his interaction with the last three British Ambassadors in Eritrea, John mentioned how they have found positive experiences there, but John couldn’t understand the disconnect with the foreign office and the media.

John also went to explain about the lives they live at rural level and harsh environment and the various works they do in Eritrea. He also spoke about how the government of Eritrea is more interested in filling the gap of 30 years with investment rather than aid with foreign direct investments that impact on the majority of the people. On the issue of NGOs, John also touched on how they sometimes act in subversive manner, also creating dependency, corruption, and distortion to labor market.

Mr. Dave Brown on his part spoke positively about his past trips and the one he is about to take to Eritrea. Giving briefings on financial inclusivity and efforts going into modernising the banking system including providing safe corridor for remittances. He spoke about putting together the eco system to modernise financial services such as e-payments and credit unions for community based financial services, which could address the issue of economic migration.

On closing remarks, Mr Yared Tesfay, Head of Media Affairs, stressed the importance of the forum bringing together from all fields to address and share their experiences, as well as reflect the ground reality in Eritrea exploring different areas opportunities of working together towards a sustainable development process in Eritrea.

He also thanked all participants, especially speakers and those who chaired the sessions on behalf of the Embassy of State of Eritrea noting their contribution.