Ensuring food security is the ultimate goal of the Eritrean government besides other national developments. The government establishes good ties with organizations to its projects.

VITA, the Irish NGO, sent delegations to Eritrea to identify areas for intervention. The delegation came recently to Eritrea to evaluate the progress on the VITA dairy and potato projects under the Teagasc agreement with the Ministry of Agriculture (MoA) and explore new strands of collaboration.

The week-long visit included meetings and site visits. This has helped to identify both the program’s successes and which parts of the program and how they would benefit from further study.

The dairy and potato pilot project has been beneficial to 50 farming households in Eritrea. The team visited farmers in the Anseba and Maekel regions. There are 25 potato farmers who just received Electra seed potato, donated by Irish Potato marketing under the pilot project. The Electra seeds matured two weeks earlier and are ready for harvest.

The visit enabled the delegation to identify some current shortages in the area. Lack of transport and communication between farmers and institutions seemed to be a problem posing constraints to a more successful roll out of the programs.

The National Agricultural Research Institute (NARI) in Eritrea is working on a large number of projects and tasks and the team is ready to address the problems farmer are facing.

The meeting was attended by representatives from different departments in the MoA, NARI, the national central laboratories and Hamelmalo Agriculture College as well as local administrations. Three staff from the cooperation section of the EU delegation also participated.

The European Union, while commencing an expanded bilateral 2004-2020 program in Eritrea, considers VITA and Teagasc as key partners focusing on agriculture. Similarly, the Ministry of National Development and the Ministry of Agriculture were called upon to validate the baseline survey in support of the “Support to the agricultural sector/ food security in Eritrea” project.

The socio-economic baseline survey was conducted by the Eritrean Bureau of Standards and Evaluation. It contained a wealth of information on the areas that are targeted by the “Support to the agricultural sector/ food security in Eritrea” project, addressing needs in the six regions.  The study combines existing information with fresh input collected through household interviews, group discussions and field observations.

The project “Support to the agricultural sector/food security in Eritrea”, is funded under the 10th European development fund, with a total budget of 40.7 million Euros. The project seeks to enhance food security through increased agricultural production and productivity and improve food access at household level. Its main components are capital investment for sustainable agriculture, access to food, and sector governance.

The implementation is ongoing and is expected to run until October 2019. The baseline survey will serve as a benchmark and provide essential information to evaluate the results of the project.

Selective potato seeds are developing in NARI Halhale, and the outcome looks encouraging, according to Mr. Mussie Fekadu, Head of Bio-Technology at the institute. Mr. Mussie further said that research conducted by the Eritrean government in collaboration with partners over the past three years has enabled the institution to develop disease-resistant potato seeds.

Meanwhile, Ms. Senait Ogbazgi, expert of vegetables and fruits at the branch of Agriculture Ministry in Dubarwa sub- zone said that farmers should effectively apply the guidelines received from experts. Farmers on their part asked for even distribution of the seeds to all farmers. 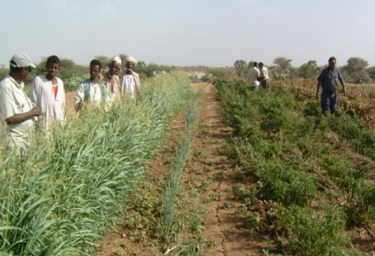 The climate in the Southern region is favorable for the production of potatoes, a staple food in Eritrea. Unlike modern farming, traditional farming yielded only a ton per hectare while improved seeds combined with appropriate farming techniques can easily provide farmers up to 4 tons per hectare.

The tissue culture laboratory in NARI is contributing immensely to this figure. It cleans seeds so that they are free of pathogens (viruses, bacteria and fungi). Thus, importing clean seeds will no longer be needed as they can be obtained locally in a cheaper and more sustainable way.

Farmers, on their part, play an essential role in propagating the improved seeds; buying virus-free seeds from the MoA along with fertilizers and pesticides.

Upon signing a contract with the regional administration, farmers agreed to follow technical advice during cultivation so that the harvested potatoes meet the quality standards required for collection. Farmers are offered 25% incentive on top of the market price for their produce to ensure delivery of quality seeds to the potato seed store. And trained workers in the store carefully select the potatoes that are suitable for further multiplication.

Having recently started its operation, the activity around the potato seed store cannot yet cover the demand of all the interested farmers. Currently, the structure only involves model farmers; they could play a prominent role once the MOA hands the responsibility for running the sector to farmers associations in the future.

Nevertheless, with a storage capacity of 216 tones, the area is expected to benefit from the increased income brought by this activity in the coming years.

The European Union funded the construction of the potato seed store. The Ministry of Agriculture has also contributed some construction related supplies such as fences to the farm area, guard room and water reservoirs.

EU delegation, MoA staff and an independent expert visited the site at the occasion of a result-oriented monitoring mission for the last month project.

All of these endeavors will be a stepping stone towards ensuring food security in Eritrea.