Egypt’s pro-government media on Thursday vilified neighboring Sudan over its expanding ties with Turkey and Qatar, saying the three are conspiring against Egypt.

While the government has publicly remained silent, Egyptian media seized on a visit to Sudan earlier this week by Turkish President Recep Tayyip Erdogan, a meeting in Khartoum between the chiefs of staff of Sudan, Turkey and Qatar, and renewed efforts by Khartoum to revive a longtime border dispute with Egypt.

Most views expressed in Egypt’s media reflect the thinking of the government or at least one of its key institutions. The criticism of Sudan and its longtime ruler Omar Bashir included personal insults and questioning the country’s statehood.

Tensions between Egypt and Sudan, which are bound by the Nile River and historic ties, often play out in the media, with the two governments keeping their distance.

The latest row could deepen a rift between Egypt and Sudan over a massive dam being built by Ethiopia that Cairo views as a threat to its share of the Nile, which provides nearly all of Egypt’s water. Negotiations over the dam are at an impasse, with Sudan appearing to tilt toward Ethiopia in the dispute.

The spat could also add to regional tensions. Egypt joined Saudi Arabia in its blockade of Qatar earlier this year, and has long been at odds with both Turkey and Qatar over their support for the Muslim Brotherhood, a regional Islamist movement that is now outlawed in Egypt.

“Sudanese President Omar Bashir is playing with fire in exchange for dollars,” wrote columnist Emad Adeeb in the Cairo daily Al-Watan, alluding to what he said was Bashir’s attempt to gain from regional rivalries.

“Sudan is violating the rules of history and geography and is conspiring against Egypt under the shadow of Turkish madness, Iranian conspiracy, an Ethiopian scheme to starve Egypt of water and Qatar’s financing of efforts to undermine Egypt,” wrote Adeeb, whose column was headlined: “Omar Bashir’s political suicide.”

Of particular concern to Egypt, according to commentaries and news reports, is Sudan’s burgeoning military ties with Turkey, including a joint naval facility on the Red Sea to repair civilian and military vessels that was announced by Bashir and the Turkish leader this week in Khartoum.

Sudan, which is in the grips of an economic crisis, complained this month to the United Nations that a maritime demarcation agreement reached in 2016 by Egypt and Saudi Arabia infringed on what it claimed to be Sudanese waters off an Egyptian-held border region it claims as its own. Egypt denies the Sudanese claim.

Egyptian media, meanwhile, insist that Bashir has ceded to Turkey sovereignty over Suakin, a small but strategic island off Sudan’s Red Sea coast. Erdogan has denied his country is constructing a naval base there, saying Turkey only plans to restore Ottoman-era ruins in the area.

Emad Hussein, editor of Cairo’s Al-Shorouk daily, wrote Thursday that Erdogan’s visit to Sudan, the first by a Turkish head of state, “cannot be viewed … except as harassment of Egypt and an attempt to annoy it by any means possible.”

Turkish Base in Sudan a Problem for Arab Powers

A fierce race is underway in the Red Sea, with various countries gunning for military bases along its shores, while carving out pockets of political and economic influence. Iran presently controls the strategic Al Hodeida port of Yemen, via its proxy Al Houthi militias, posing a direct threat to Saudi Arabia.

Last October, Turkey established a military base in Somalia, months after deploying nearly 5,000 troops in Qatar — which, although not on the Red Sea, is being used by Iran to pressurise Saudi Arabia.

This week, Ankara was given full-rights to rehabilitate the port island/town of Suakin in northeastern Sudan, with a naval dock for both civilian and military vessels on the west coast of the Red Sea. In addition to rebuilding the now abandoned inland ghost town of Suakin, the Turkish government will also resurrect the former Ottoman port as a historic transit point for pilgrims crossing the Red Sea to Makkah, given its proximity to the Saudi port city of Jeddah.

The controversial agreement was reached by President Recep Tayyip Erdogan with his Sudanese counterpart Omar Al Bashir during a summit in Khartoum earlier this week. Turkish state media said this would be part of a broader agreement between the two countries, worth $650 million — money that Turkey presently does not have. The real source of the funds is probably Qatar. In addition to a military base, Ankara plans to build a new airport in Khartoum, and to invest in cotton production, electricity generation, and grain silos. Bashir and Erdogan promised to boost bilateral trade to reach $10 billion.

The new base is problematic for several countries overlooking the Red Sea. Given its proximity to Suakin, Saudi Arabia is first to worry, mainly because of Erdogan’s open alliance with Iran, cemented at the Black Sea resort of Sochi this December. The Iranians can now use the new Turkish base in Sudan to send more arms and equipment to Al Houthis, while Turkey can use its newfound military presence to send more troops to Qatar, or meddle further in the affairs of Egypt, through the outlawed Muslim Brotherhood, which remains firmly allied to Ankara and Doha. Along with Egypt, this undoubtedly worries Jordan, too. Egypt has its own territorial disputes with Sudan, over the Halaib Triangle on the Red Sea. Since Sudan’s independence in 1956, both Cairo and Khartoum have claimed sovereignty over this area, with Egypt deploying military units there since the 1990s, aimed at preventing any Sudanese adventurism. With Turkish/Iranian instigation, Sudanese ambitions might get awakened over the Halaib Triangle.

Countering the Iranian/Turkish threat are other bases that are quickly sprouting along the Red Sea. The Saudi-backed forces of Yemeni President Abd Rabbo Mansour Hadi still control Bab Al Mandeb and Aden, while Egypt and Jordan control the gulfs of Suez and Aqaba, serving as a strong deterrent.

Such bases are a novelty on the international arena, given that throughout the Cold War, only the two superpowers had military bases outside their territory across the world.

What makes the Turkish-Iranian presence all the more worrying for Saudi Arabia is the lack of US presence in the Red Sea. True, US ships sail daily through the Red Sea, but there is no permanent presence of the US Navy there, like that of the 5th Fleet in the Gulf or the 6th Fleet in the Mediterranean. Instead, China recently set up a permanent base, with a military complex, in Djibouti, being the first of its kind in the Horn of Africa. 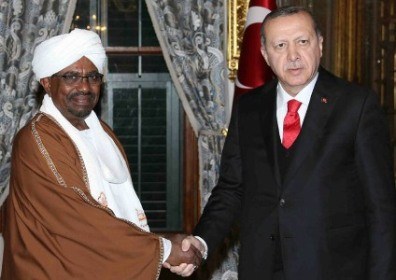 The denial came after attacks by the Egyptian media and a Saudi newspaper slamming the Sudanese – Turkish deal, pointing that it aims to destabilise the government of President Abdel Fattah el-Sisi who removed from power the Islamist President Mohamed Morsi in July 2013.

“There is no such thing as a military port,” said President Erdogan in response to a question about the nature of Suakin deal during his return flight to Ankara from an African tour published by the Turkish Hurriyet newspaper on Thursday.

Following a trip to the ruined Ottoman port city on Tuesday, an agreement was reached by Erdogan and Sudan’s President Omer al-Bashir to rebuild the ruined town and to construct a naval dock to maintain civilian and military vessels.

In parallel to Erdogan statements, Sudan’s embassies in Cairo and Riyadh issued strongly worded statements rejecting the claims by the pro-government Egyptian government media and Okaz newspaper that Turkey seeks to harm the security of Arab countries.

“Some foolish and agitator Egyptian media found in the visit of the Turkish President Erdogan to Sudan an opportunity to attack Sudan, its (sovereign) options, and even underestimating its leadership and the history of the nation,” said Sudan’s Ambassador to Cairo in a press statement on Wednesday.

Also, the Sudanese embassy in Saudi Arabia issued a statement denying claims by Okaz newspaper in an article titled “Sudan’s ’Suakin under the control of Erdogan’’ stressing that Suakin is under the control of Sudanese government. The statement added that such claims are an insult to Sudan and its right to develop ties with other countries.

Observers in Khartoum see the media attack in the Egyptian media and Saudi newspaper as a coordinated campaign by the anti-Qatar alliance countries on the government of President al-Bashir.

They further point to the maritime border agreement between Egypt and Saudi Arabia which acknowledges the disputed Halayeb as an Egyptian territory.

In April 2017, the Egyptian media had already attacked the Sudanese pyramids of Meroe after a visit to the area by Sheikha Mouza bint Nasser of Qatar to these archaeological sites.

Relations between Cairo and Khartoum are strained over the disputed border area of Halayeb and Sudan’s support to the Ethiopian dam on the Blue Nile.

The relations between Egypt and Turkey are strained since the July 2013 coup d’état by Egyptian army chief General Abdel Fattah el-Sisi. In November 2014 Erdogan said he had refused to take part in a UN meeting attended by the Egyptian president.